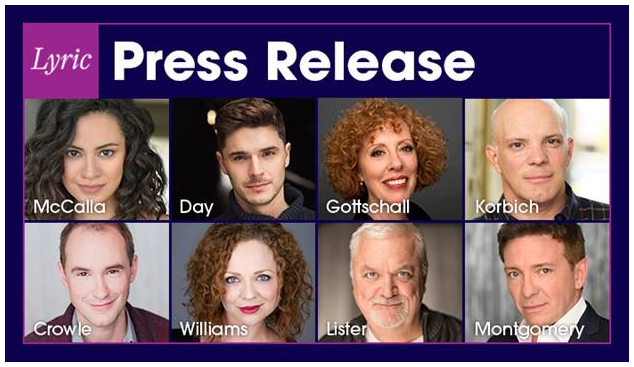 Stephen Mear directs and choreographs this high-energy production featuring members of the Lyric Opera Orchestra, conducted by Gareth Valentine. Set and costume designs are by Peter McKintosh, with lighting designed by Chris Davey and sound designed by Mark Grey.

The Tony Award-winning song-and-dance spectacular 42nd Street centers on a starry-eyed young dancer named Peggy Sawyer who leaves her home in Allentown, Pennsylvania, to audition for the new Broadway show Pretty Lady, staged by notorious director Julian Marsh. When leading lady Dorothy Brock breaks her ankle, Peggy takes over and rises from chorus girl to star status overnight. 42nd Street is filled with sensational tap numbers and memorable melodies like “Lullaby of Broadway,” “We’re in the Money,” “You’re Getting to Be a Habit with Me,” “I Only Have Eyes for You,” “Shuffle Off to Buffalo,” and the famed title song. With music by Harry Warren, lyrics by Al Dubin and Johnny Mercer, and a book by Michael Stewart and Mark Bramble, the stage musical is based on the novel by Bradford Ropes and Busby Berkeley’s 1933 movie.

Norm Lewis (Julian Marsh) has received Tony, Drama Desk, Drama League, and Outer Critics Circle award nominations as Porgy in The Gershwins’ Porgy & Bess. He recently appeared in NBC’s Jesus Christ Superstar Live in Concert! and in the Broadway revival of Once on This Island. In 2014, Lewis was the first African American to play the title role in Phantom of the Opera on Broadway. His nine other Broadway shows range from Les Misérables and Chicago to Miss Saigon and The Who’s Tommy. He has appeared extensively off-Broadway and in many major regional theaters nationwide, including in the title role of Sweeney Todd (AUDELCO Award). On PBS he has been seen in Norm Lewis: Who Am I?, New Year’s Eve: A Gershwin Celebration, Les Misérables: The 25th Anniversary Concert (as Javert, a role he also played in London’s West End), Show Boat, American Voices with Renée Fleming, and First You Dream – The Music of Kander & Ebb. Lewis has a recurring role in the VH1 series Daytime Divas and has previously been featured in television’s Scandal, The Unbreakable Kimmy Schmidt, Bull, Chicago Med, Gotham, The Blacklist, and Blue Bloods. Lewis stars in Spike Lee’s upcoming Netflix film Da 5 Bloods.

Faith Prince (Dorothy Brock) has been dazzling Broadway since winning the Tony, Drama Desk, and Outer Critics Circle awards as Miss Adelaide/Guys and Dolls. She most recently starred on Broadway in Disaster! and as Miss Hannigan in the revival of Annie. She was nominated for Tony, Drama Desk, and Outer Critics Circle awards for both A Catered Affair and Bells Are Ringing, and was nominated for Tony and Drama Desk awards for Jerome Robbins’ Broadway. Other important credits include The Little Mermaid, Nick & Nora, Little Me, The Dead, and Noises Off (Broadway); Billy Elliott (national tour); Terrence McNally’s Unusual Acts of Devotion (world premiere, Philadelphia Theatre Company); and First Wives Club (Chicago’s Oriental Theatre). Prince currently has a recurring role on ABC’s Modern Family. Among her other extensive television credits are Spin City, Ugly Betty, Grey’s Anatomy, CSI, Faith, House, Monk, and Law and Order. Film appearances include Our Very Own, Picture Perfect, Dave, and My Father the Hero. Prince, who has toured Australia in her original show Moving On and in concert with her Annie costar Anthony Warlow, works frequently with the Boston Pops, Utah Symphony, Cincinnati Pops, and Philly Pops. Her new album, Total Faith, was recently released by Broadway Records.

Isabelle McCalla (Peggy Sawyer) recently starred on Broadway as Alyssa Greene, one of the two lead high-school lovers in The Prom. She made her Broadway debut as Jasmine in the Disney musical Aladdin and also originated the role on the national tour. She portrays Jasmine once more in Disney’s upcoming film of the stage show. Regional credits include Fly this spring at La Jolla Playhouse, Footloose at the Kennedy Center in Washington, DC; West Side Story at Asolo Repertory Theatre in Sarasota; Mary Poppins at Theatre Under the Stars in Houston; and multiple shows at The Muny (St. Louis) and Pittsburgh Civic Light Opera. Her work on television includes Bull (CBS). She earned her Bachelor of Fine Arts degree at the University of Michigan.

Ashley Day (Billy Lawlor) is a recent arrival to the U.S. from London. He recently starred as Nick Arnstein in Funny Girl at Théâtre Marigny in Paris, directed by Stephen Mear. His first U.S. appearance was last fall at New York’s Joyce Theater in Al Blackstone’s dance play, Freddie Falls in Love. His West End starring roles include Billy Lawlor in the revival of 42nd Street and Jerry Mulligan in An American in Paris. Other West End and U.K. tour credits include The Book of Mormon, Kiss Me Kate, On the Town, Evita, Mary Poppins, and Matthew Bourne's Nutcracker! He was a guest soloist with The Hallé Orchestra and the Royal Bangkok Symphony Orchestra. He was nominated for the U.K. Theatre Award for Best Performance as Curly in the national tour of Oklahoma!

Ruth Gottschall (Maggie Jones) has appeared in numerous Broadway shows, including Mary Poppins, in which she originated the role of Miss Andrew; Eulalie MacKecknie Shinn in The Music Man; Domina in A Funny Thing Happened on the Way to the Forum; Cabaret; The Goodbye Girl; Legs Diamond, Laughing Room Only, and The Best Little Whorehouse in Texas. Her varied career includes dancing in the ballet company at Radio City Music Hall, singing in The Desert Song at New York City Opera, and performing internationally with Liza Minnelli in Steppin’ Out. Television and film credits include: Law and Order, Annie (Disney, ABC), and Showboat and Sondheim: A Celebration at Carnegie Hall on PBS.

Eddie Korbich (Bert Berry) has appeared on Broadway in Breakfast at Tiffany’s, A Gentleman’s Guide to Love and Murder, A Christmas Story, The Little Mermaid, The Drowsy Chaperone (Drama Desk Award nomination), After the Night and the Music, Wicked, Seussical, Carousel, Singin’ in the Rain, and Sweeney Todd. His Off-Broadway credits include Assassins, Godspell, My Parsifal Conductor, The New Yorkers, Taking a Chance on Love (2000 Obie Award), The Gifts of the Red Menace, A Little Night Music, and Eating Raoul. He toured nationally as Frank in Showboat and most recently appeared regionally in The Wizard of OZ (KC Starlight), Jeeves & Wooster in “Perfect Nonsense” (Hartford Stage) The Gamester (St. Louis Rep), Dracula (North Shore), and 3hree (Ahmanson). His television and film credits include Blue Bloods, The Deuce, Law & Order, New York Undercover, Out of the Box, Deadbeat, Elementary, Mysteries of Laura, Jennifer 8, and Quiz Show. Saturday morning cartoon fans may recognize his voice as a regular on Nickelodeon’s Doug and PB & J Otter.

Kristen Beth Williams (Ann Reilly) just finished the City Center Encores! production of Mack & Mabel. On Broadway, she has been seen in Pippin, Nice Work if You Can Get It, Anything Goes, Promises, Promises, and most recently Hello, Dolly! Williams originated the role of Sibella Hallward on the first national tour of A Gentleman’s Guide to Love and Murder, and she starred as Dale Tremont/Top Hat in London’s West End. Favorite regional credits include leading roles in Shrek (Broadway at Sacramento), Million Dollar Quartet (Great Lakes Theatre/Lake Tahoe Shakespeare), My Fair Lady (Riverside Theatre), White Christmas (The Ordway), Turn of the Century (Goodman Theatre), Music Theatre of Wichita, Goodspeed. Williams has been a featured soloist at London’s Royal Albert Hall, Carnegie Hall, and New York’s Town Hall.

Under the leadership of general director, president & CEO Anthony Freud, music director Sir Andrew Davis, music director designate Enrique Mazzola, and creative consultant Renée Fleming, Lyric is dedicated to reflecting, and drawing strength from the diversity of Chicago. Lyric offers, through innovation, collaboration and evolving learning opportunities, ever more exciting, accessible, and thought-provoking audience and community experiences.  We also stand committed to training the artists of the future, through The Patrick G. and Shirley W. Ryan Opera Center and to becoming increasingly diverse across our audiences, staff, programming and artists - magnifying the welcoming pull of our art form, our company, and our city.

A production created by the Théâtre du Châtelet, Paris.

Book by MICHAEL STEWART & MARK BRAMBLE. Based on the novel by Bradford Ropes. Original direction and dances by GOWER CHAMPION. Originally produced on Broadway by DAVID MERRICK. The use of all songs is by arrangement with Warner Bros., the owner of music publishers’ rights. 42nd Street is presented by arrangement with TAMS-WITMARK.