Moulin Rouge! The Musical to Premiere in Chicago 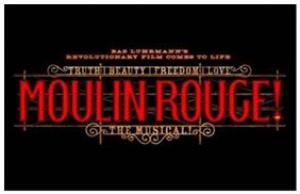 “After ten years in development, the fantastic response to Moulin Rouge! The Musical in New York is mind blowing,” said producer Carmen Pavlovic, and continued, “We’re keen to share the enthusiasm for Moulin Rouge! The Musical across the country. It’s thrilling that a second company will be going out to audiences across North America just one year after the Broadway opening.”

Lou Raizin, President of Broadway In Chicago said, “It is most exciting that Chicagoans will be among the first to see this amazing show outside of New York.”

Enter a world of splendor and romance, of eye-popping excess, of glitz, grandeur and glory! A world where Bohemians and aristocrats rub elbows and revel in electrifying enchantment. Pop the champagne and prepare for the spectacular spectacular...Welcome to Moulin Rouge! The Musical.

The Moulin Rouge! The Musical original Broadway Cast Album, which debuted #1 on Billboard’s Cast Albums Chart, is now available at all digital and streaming providers by Baz Luhrmann’s label, House of Iona, and RCA Records. Click here to listen to the album. A physical edition of the album will be made available on October 25, 2019.

As in the film, Moulin Rouge! The Musical celebrates some of the greatest popular music of the last 50 years. The stage musical features many of the iconic songs from the movie and also includes recent hits released since the movie premiered 18 years ago.

Released by 20th Century Fox, “Baz Luhrmann’s Moulin Rouge!” premiered at the 2001 Cannes Film Festival. At the 74th Academy Awards, the film was nominated for eight Oscars, including Best Picture, and won two.

The Moulin Rouge of Paris is a dazzling and spectacular universe, the symbol of the Parisian way of celebrating since 1889. Starting life as a popular cabaret and dance hall, the venue became an iconic music hall in the Roaring Twenties, and then a theatre where numerous famous French and international artistes stepped out into the limelight.

Moulin Rouge! The Musical is currently playing on Broadway at the Al Hirschfeld Theatre where it opened to rave reviews on July 25, 2019 (previews began June 27).

Tickets are available now for groups of 20 or more by calling Broadway In Chicago Group Sales at (312) 977-1710 or emailing GroupSales@BroadwayInChicago.com.  Individual tickets for Moulin Rouge! The Musical will go on sale at a later date.  Moulin Rouge! The Musical will be part of Broadway In Chicago’s next season, on sale this fall.  For more information, visit www.BroadwayInChicago.com.

ABOUT BROADWAY IN CHICAGO
Broadway In Chicago was created in July 2000 and over the past 19 years has grown to be one of the largest commercial touring homes in the country.  A Nederlander Presentation, Broadway In Chicago lights up the Chicago Theater District entertaining more than 1.7 million people annually in five theatres. Broadway In Chicago presents a full range of entertainment, including musicals and plays, on the stages of five of the finest theatres in Chicago’s Loop including the Cadillac Palace Theatre, CIBC Theatre, James M. Nederlander Theatre, and just off the Magnificent Mile, the Broadway Playhouse at Water Tower Place and presenting Broadway shows at the Auditorium Theatre.