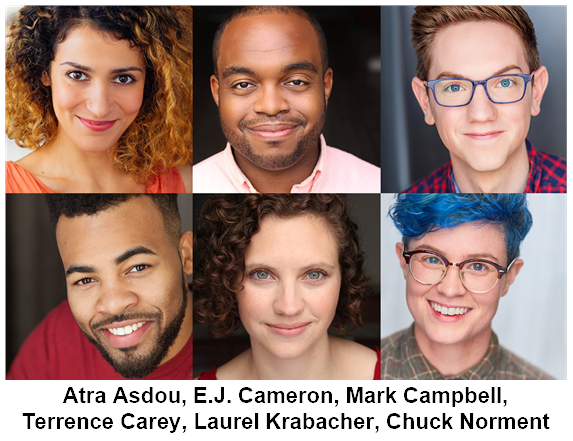 This will be the iconic comedy theater’s first new revue created as part of its 60th anniversary year, which kicked off last month. Founded in 1959, The Second City added the e.t.c. Theater in 1983, and alumni of this stage include Keegan-Michael Key, Aidy Bryant, Jack McBrayer, Nia Vardalos, Adam McKay,  Horatio Sanz, and Steven Colbert.

As this new revue will develop in front of the audience over a ten-week process, the “Third Act” improv set is a thrilling opportunity for audiences to watch and participate in the creation of comedy history at the world’s premier sketch comedy and improvisation institution.

ATRA ASDOU (Ensemble; Pronouns: She/Her/Hers) is a comedian/actor/writer/director from Chicago. Some of her TV credits include South Side (Comedy Central) Chicago Med, and Chicago P.D. (NBC). She stars in the award-winning comedic web series Other People’s Children, is an artistic associate at Lookingglass Theatre, frequently contributes weekly satire to The Paper Machete, and directed the critically acclaimed sketch show Teen Cudi Presents: Black Boy Joy. At  The Second City, Atra has understudied for the e.t.c.’s 40th revue A Red Line Runs Through It before joining the cast of Grinning from Fear to Fear, the stage’s 43rd revue. Asdou was a 2017 recipient of The Second City Training Center’s Bob Curry Fellowship. Special thanks to this stellar cast and production team. Insta & Twitter: @AtraAsdou. More at www.AtraAsdou.com.

E.J. CAMERON (Ensemble; Pronouns: He/Him/His) is very excited to be a part of this show. He's lived in Chicago for five years, where he has graduated from and performed at The Second City, iO, Comedy Sportz. He was a recipient of The Second City Training Center’s Bob Curry Fellowship in 2016 before joining the cast of the e.t.c.’s 43rd revue, Grinning from Fear to Fear. Prior to moving to Chicago, E.J. received his BFA in Acting at Columbus State University (not Ohio!) and performed with multiple troupes. He is represented by Paonessa Talent and is an avid pro-wrestling fan who loves the color purple. Follow @Ej_Cam19.

MARK CAMPBELL (Ensemble; Pronouns: He/Him/His) is so grateful to be a part of The Second City! He performed all over the country with The Second City Touring Company and all over the ocean aboard the Norwegian Dawn and Gem before joining the cast of the e.t.c.’s 43rd revue, Grinning from Fear to Fear. Mark is also a member of The Improvised Shakespeare Company at iO Chicago and the ComedySportz Chicago professional ensemble. He is proudly represented by Paonessa Talent. Huge thank yous to his family, especially his dog, Smitty. Follow him for tweets @themarkcampbell!

TERRENCE CAREY (Ensemble; Pronouns: He/Him/His) comes from the deep south side—in Madison, Wisconsin. A graduate of Columbia College Chicago with a degree in Theater and a concentration in Acting and Debt, you might have seen him in Second City Theatricals productions such as #DateMe, Legendary Laughs, or Improv All-Stars. Terrence can be seen performing or teaching workshops all over the city and with the improvised spoken word collective that he co-founded, PREACH! Terrence is mad thankful to be a former member of The Second City Touring Company. Follow Terrence and everything he shouts out on his Instagram @tbabybabybaby, please type the baby.

LAUREL KRABACHER (Ensemble; Pronouns: She/Her/Hers) is very happy to be a part of The Second City for her second e.t.c. revue! A Second City Touring Company alum, she is a Colorado native and a theater graduate of the University of Northern Colorado. If you want more Laurel, you can see her at CIC with Little Gary and at iO with Tone and Revolver. She is represented by BMG Talent.

CHUCK NORMENT (Ensemble; Pronouns: They/Them/Theirs) hails from Newport News, Virginia. They can also be seen performing at iO with “Virgin Daiquiris,” “Your Fucked Up Relationship” and with the Harold team “Meridian.” Chuck was a featured performer in The Second City and NBCUniversal's Break Out Comedy Festival in 2016 before joining the cast of the e.t.c.’s 43rd revue, Grinning from Fear to Fear. They are single as hell, so slip into their DMs on Instagram @masculinehair.

FRANK CAETI (Director; Pronouns: He/Him/His) has directed productions of Love Factually and Twist Your Dickens at the Kennedy Center. Other directing credits include The Second City Hollywood, Comedy Central, Upright Citizens Brigade, Ithamar Has Nothing To Say, and Supportive White Parents. He co-wrote and directed #DateMe: An OkCupid Experiment, which has played in Los Angeles, Chicago, and Off-Broadway NYC.

ELISE WATTMAN (Original Music, Sound Design, Musical Director; Pronouns: She/Her/Hers) is a Minnesota native who ventured to Texas to get expensive music degrees from UNT, then fell in love with Chicago. At age four, she arranged The Sorcerer’s Apprentice for piano and decided to make a living out of it. Outside of The Second City, Elise scores music for dance companies and film projects, performs with the bands Audio Ghost and Ivory Ovaries, serves as creative director of Bathroom Tapes Inc., and mentors young musicians through her program Artist Ignite.  Instagram: @elisenavidadity

LAURA HUM (Stage Manager; Pronouns: She/Her/Hers) is thrilled to be a part of the e.t.c.’s 44th revue, which is her sixth  resident stage production with The Second City. Previous credits on this stage include Grinning from Fear to Fear, Gaslight District, Fantastic Great Super Nation Numero Uno, A Red Line Runs Through It, and Soul Brother, Where Art Thou? She is an alumna of The Ohio State University and The Second City Touring Company.

About The Second City

Since opening its doors 1959, The Second City has grown to become the world’s premier comedy club, theater and school of improvisation, entertaining 1 million theatergoers a year around the globe. Alumni of The Second City’s resident stages, touring companies, and theatrical divisions include some of the biggest names in entertainment, and in addition to the sold-out shows playing nightly on resident stages in Chicago and Toronto, the comedy empire has staged productions with a wide range of illustrious creative partners and theatre companies, including the Lyric Opera of Chicago, Hubbard Street Dance Chicago, The John F. Kennedy Center for the Performing Arts, Goodman Theatre, Center Theater Group Los Angeles, Portland Center Stage, Toronto Symphony Orchestra, La Jolla Playhouse, Woolly Mammoth Theatre, and even the Chicago Bulls.