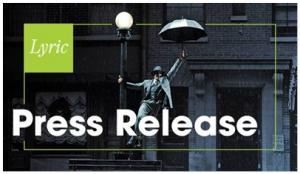 Based on the classic Metro-Goldwyn-Mayer movie written by Betty Comden and Adolph Green, with music by Nacio Herb Brown and lyrics by Arthur Freed, this joyously exhilarating production is the latest offering of Lyric’s highly popular annual musical tradition.

Singin’ in the Rain will run from June 4 through June 27, 2021, at the Lyric Opera House, with tickets starting at $29. Tickets are available at lyricopera.org/singinintherain or by calling Audience Services at 312.827.5600.

The Singin’ in the Rain creative team has extensive international experience in theater, film, and opera. Director and lighting designer Robert Carsen has directed at most of the major international opera houses, including Lyric and the Metropolitan Opera. Choreographer Stephen Mear, the director and choreographer of Lyric’s upcoming presentation of 42nd Street, is acclaimed for many productions, including Guys and Dolls at Royal Albert Hall, Die Fledermaus at the Met, Sunset Boulevard on Broadway, and Mary Poppins in the West End. Set designer Tim Hatley has won Tony Awards for Private Lives (sets) and Shrek the Musical (costumes). Costume designer Anthony Powell has won three Academy Awards for Travels with My Aunt (1972), Death on the Nile (1978), and Tess (1979). Lighting designer Giuseppe Di lorio has designed for major international theaters and works frequently with acclaimed director Graham Vick. Conductor Gareth Valentine will be at the podium for both Singin’ in the Rain and this season's 42nd Street.

"We are thrilled to be presenting Singin’ in the Rain to our audiences next spring," said Anthony Freud, Lyric’s general director, president and CEO. "This timeless classic continues Lyric’s tradition of staging beloved Broadway musicals on a scale that is rarely seen. In a scintillating new-to-Chicago production that comes to us from the Théâtre du Châtelet in Paris, Singin’ in the Rain is sure to delight our audiences.”

In Singin’ in the Rain, audiences can revel in the glamour of Hollywood in the Roaring Twenties, when the “talkies” were taking over from silent films. The romance between matinee idol Don Lockwood and budding actress Kathy Selden, the machinations of squeaky-voiced star Lina Lamont, and the lovable deviousness of Don’s best friend, Cosmo Brown, combine with spectacular dancing and unforgettable songs.

The story of Don Lockwood was first told in the 1952 American movie musical directed and choreographed by Gene Kelly and Stanley Donen. The stage show premiered on Broadway in 1985 and was nominated for two Tony Awards, including Best Book of a Musical.

Single tickets for Singin’ in the Rain can be purchased at lyricopera.org/singinintherain or by calling Audience Services at 312.827.5600.

Under the leadership of general director, president & CEO Anthony Freud, music director Sir Andrew Davis, music director designate Enrique Mazzola, and special projects advisor Renée Fleming, Lyric is dedicated to reflecting, and drawing strength from the diversity of Chicago. Lyric offers, through innovation, collaboration and evolving learning opportunities, ever more exciting, accessible, and thought-provoking audience and community experiences.  We also stand committed to training the artists of the future, through The Patrick G. and Shirley W. Ryan Opera Center and to becoming increasingly diverse across our audiences, staff, programming and artists - magnifying the welcoming pull of our art form, our company, and our city.