ANDREW RAFACZ is pleased to announce the opening of our new location at 1749 West Chicago Avenue with The Half That Ties, The Half That Breaks, a 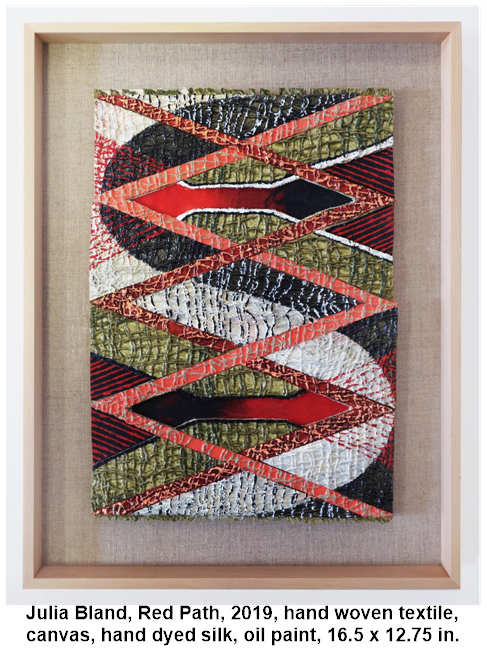 solo exhibition of new works by Julia Bland in Gallery One. The exhibition continues through Saturday, December 21, 2019.

For her inaugural exhibition in Chicago, Bland presents a body of new works that approach the rhythm and weight of their repeated geometric forms through a series of intertwined processes.  Through acts of weaving, cutting, burning, sewing, dying and painting, Bland continually assembles and dissembles various materials to create her final forms and resultant imagery.  Repeatedly burning and layering sheets of canvas, the edges darken and follow their natural patterns outward like topographical maps.  She cuts, ties, and paints these into swaths of fabric that have been woven and died by hand. Shedding definitive notions of creation and destruction, the surfaces emerge as the immediate record of these evolving, dialectical transformations.

The structures and images that emerge are complexly layered and tied conceptually to the history of painting, while pushing beyond it materially. They function within this context while striving for something akin to the imaginary.

ANDREW RAFACZ is pleased to announce Temple, a solo exhibition of new works by Robert Burnier in Gallery Two. The exhibition continues through Saturday, December 21, 2019. 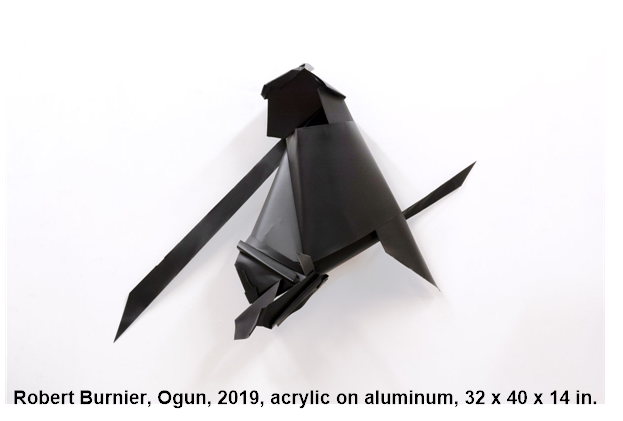 Temple inquires into the spiritual, mythical and demiurgic as personal and historical mover, and as horizon for the possible. Sanctuary and citadel, power in repose, the combination of material and spiritual energy in self-possession. If ancient narratives and rhymes still haunt modernity, and we still struggle with where the story is going, what can change this script?

As one looks into the gaze of the Achaemenid bulls’ heads, they gaze back. The Temple of Dendur makes one dream of being on the still waters before it in wonder. Again and again, the Bull and the Lion meet in relief and image, a reminder that another clash is always around the corner. The ochre geometries of Blombos cave reveal that a different kind of order awaits.

ROBERT BURNIER (American, b. 1969) lives and works in Chicago, IL. He received his MFA from the School of the Art Institute in painting and drawing in 2016. He also holds a BS in Computer Science from Shippensburg University of Pennsylvania (1991). He has had recent solo exhibitions at David B. Smith Gallery (Denver, CO), and The Arts Club of Chicago (Chicago, IL). Recent group exhibitions include Vacation (New York, NY), Korn Gallery at Drew University (Madison, NJ), Mana Contemporary (Chicago, IL), The Art Institute of Chicago (Chicago, IL), and Elmhurst Art Museum (Elmhurst, IL). Independent Curators International commissioned a series of works that were presented at NADA Miami (2014) and NADA New York (2015) respectively. His large-scale installation Black Tiberinus is currently on view on Chicago’s riverfront. He has exhibited at art fairs in Chicago, Miami, New York, Mexico City, and Copenhagen. This is his fourth solo exhibition with the gallery.