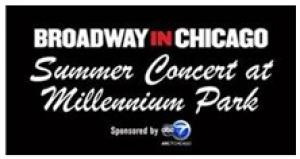 Broadway In Chicago is thrilled to announce that its free SUMMER CONCERT will return to Millennium Park this August for the first time since 2019. The FREE BROADWAY IN CHICAGO SUMMER CONCERT, sponsored by ABC 7 Chicago, will take place on Monday, August 15, 2022 at 6:15 pm at the Jay Pritzker Pavilion in Millennium Park (201 E Randolph St). The Broadway In Chicago Summer Concert at Millennium Park is presented with the City of Chicago Department of Cultural Affairs and Special Events. Several shows will be performing including Disney’s The Lion King, Dear Evan Hansen, Wicked, and straight from Broadway, MJ, the brand new 4-time Tony Award-winning musical that offers a rare look at the creative mind and collaborative spirit of Michael Jackson. Additional shows will be announced at a later date.

“Our favorite event of the year finally returns for the first time in three years, and we’re coming back with performers from favorite Broadway blockbusters! Enthusiastic theater fans can look forward to seeing performances from our spectacular lineup of upcoming shows. Mark your calendars - this is a night you do not want to miss,” said Eileen LaCario, Vice President of Broadway In Chicago.

The Broadway In Chicago Summer Concert is presented in collaboration with the Department of Cultural Affairs and Special Events. Every summer in Millennium Park, the City of Chicago proudly presents symphonic music, dance, opera, Broadway hits and more—performed by some of Chicago’s best-loved cultural institutions. For the latest news and events, visit millenniumpark.org and follow Millennium Park on Facebook (@MillenniumParkChicago), Twitter, and Instagram (Millennium_Park).

For more information on the Summer Concert and Broadway In Chicago, visit www.BroadwayInChicago.com.

Discover a world-class collection of architecture, landscape design and art that provides the backdrop for hundreds of free cultural programs including concerts, exhibitions, interactive art and family activities. In Millennium Park, you’ll find a spectacular gathering spot located in the heart of the city, a destination for all Chicagoans and visitors alike. Millennium Park is the #1 attraction in the Midwest and among the top 10 most-visited sites in the U.S. It is also the anchor of an urban cultural campus (Millennium Park Campus) that includes the Chicago Cultural Center, Maggie Daley Park and The Art Institute of Chicago. Millennium Park is located on Michigan Avenue, bordered by Randolph St. to the north, Columbus Dr. to the east and Monroe St. to the south. The Park is open daily during the summer from 6 a.m. to 11 p.m. Plan your visit at millenniumpark.org, follow us on Facebook (@MillenniumParkChicago), Twitter, and Instagram (@Millennium_Park) and join the conversation on social media using #MillenniumPark.

ABOUT CHICAGO DEPARTMENT OF CULTURAL AFFAIRS AND SPECIAL EVENTS

The Department of Cultural Affairs and Special Events (DCASE) is dedicated to enriching Chicago’s artistic vitality and cultural vibrancy. This includes fostering the development of Chicago’s non-profit arts sector, independent working artists and for-profit arts businesses; providing a framework to guide the City’s future cultural and economic growth, via the Chicago Cultural Plan; marketing the City’s cultural assets to a worldwide audience; and presenting high-quality, free and affordable cultural programs for residents and visitors. Visit chicago.gov/dcase.

ABOUT BROADWAY IN CHICAGO

Broadway In Chicago was created in July 2000 and over the past 22 years, has grown to be one of the largest commercial touring homes in the country. A Nederlander Presentation, Broadway In Chicago, lights up the Chicago Theater District entertaining more than 1.7 million people annually in five theatres. Broadway In Chicago presents a full range of entertainment, including musicals and plays, on the stages of five of the finest theatres in Chicago’s Loop, including the Cadillac Palace Theatre, CIBC Theatre, James M. Nederlander Theatre, and just off the Magnificent Mile, the Broadway Playhouse at Water Tower Place and presenting Broadway shows at the Auditorium Theatre.