The Cabaret Room at Drury Lane announces the return of Denise Tomasello in Holding Court: Reflections on a Life of Cabaret September 27th-28th 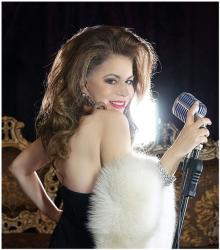 Chicago's Queen of Cabaret puts her glamorous touch on Broadway favorites and classics from The Great American Songbook. Join Denise Tomasello for an intimate evening of song and stories as she strolls down memory lane accompanied by Musical Director Nick Sula. Reserve your tickets now for this evening of cabaret and see why the Chicago Tribune calls Denise "wildly glamorous and wickedly amusing."

Denise has headlined and sold out every major venue in Chicago including Chicago Theatre, Park West,  Empire Room, The Pump Room, Davenport’s, a two-year residency at The Fairmont’s Metropole Room, a six-year record-breaking run at Sages, and more. Most recently, Denise sold out concerts at the Auditorium Theatre, Metropolis Performing Arts Centre, Skokie Theatre, and The Drake Hotel’s Grand Ballroom

The Cabaret Room at Drury Lane offers a special small plates menu including a shareable charcuterie and cheese platter, bacon wrapped dates, and specialty cocktails and desserts. Doors open one hour prior to performance time, leaving plenty of time for guests to take advantage of this delectable menu. Gold Circle tickets include front row table seating at $50 and General Admission table seating is $40. There is a $25 food and beverage minimum per person.

For more information or to make a reservation, call the Drury Lane Theatre box office at 630.530.0111 or visit www.DruryLaneTheatre.com.

Agatha Christie’s edge-of-your-seat murder mystery And Then There Were None is currently playing through September 1, 2019. The 2019/2020 season continues with the revival of the exhilarating The Color Purple (September 13 – November 3, 2019), based on the Pulitzer Prize-winning novel; and the magical musical for all ages Mary Poppins (November 15 – January 19, 2020).

The performance schedule for all productions during the 2019/2020 season is as follows: Wednesdays at 1:30 p.m., Thursdays at 1:30 p.m. and 8 p.m., Fridays at 8 p.m., Saturdays at 3 p.m. and 8 p.m., and Sundays at 2 p.m. and 6 p.m. Student group tickets start as low as $35 and Senior Citizens start at $45 for matinees. Dinner and show packages are also available. For individual ticket on-sale dates and ticket reservations, call the Drury Lane Theatre box office at 630.530.0111 or TicketMaster at 800.745.3000 or visit www.DruryLaneTheatre.com.  For more information, visit www.DruryLaneTheatre.com.

Under the leadership of President Kyle DeSantis Drury Lane Theatre is a major force in the Chicagoland theatre scene, presenting world-class productions in collaboration with some of the nation’s leading actors, artists, writers, and directors. Drury Lane has staged more than 2,000 productions and has been nominated for more than 360 Joseph Jefferson Awards. Drury Lane is committed to breathing new life into beloved classics and introducing audiences to exciting new works.