1825     The Indiana General Assembly approved an act which established a state library.  It was one of the first decisions approved after the move to the new capital of Indianapolis.  The Secretary of State was designated as the first state librarian.

1851     The Constitutional Convention concluded in Indianapolis.  The new document, created by the 150 delegates, replaced the original 1816 version.  50,000 copies were printed in English and 5,000 more were printed in German.  The convention had been in session for 127 days.  Pictured: Both of the original handwritten Indiana State Constitutions are currently on display in the rotunda of the Indiana Statehouse.

1861     On the way to his inauguration in Washington, President-Elect Abraham Lincoln spent a night in Indianapolis.  He gave a speech from the balcony of his hotel, the Bates House, at the northwest corner of Washington and Illinois Streets.  When he departed the next morning, February 12, it was his 52nd birthday.

"It is not so much the length of the step that counts, as the direction in which it is taken."  - - - Benjamin Harrison

1948     Mordecai "Three Fingers" Brown died in Terre Haute.  Growing up in Parke County, he suffered serious injuries to his right hand.  He picked up the nickname which followed him through an outstanding pitching career in major league baseball.  Starring on a number of teams, including the  St. Louis Cardinals, Cincinnati Reds, and Chicago Cubs, he was inducted posthumously into the Baseball Hall of Fame in 1949.

2008     An Indiana Historical Marker was dedicated at the Benjamin Banneker School in Bloomington.  Opened in 1915, the school served African-American students and was segregated until 1951.  The building now serves as a community center.

Indiana has a website devoted to the 2020 Census.  Here you will find all kinds of information about why the upcoming census is so important to the state.  Did you know that Miniature Schnauzer Henry Holcomb is an official ambassador for the Hoosier census? There is even a coloring page for Henry.  Follow the link below. 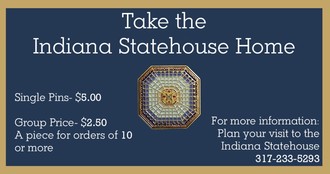 Check out this beautiful pin!  It reflects the beautiful array of colors in the magnificent stained glass high above the rotunda in the Indiana Statehouse.