Indianapolis is celebrating its bicentennial.  Here are some questions to test your knowledge of capital city history.

1863     The Civil War came to Indiana when over 2,000 Confederate soldiers under the command of John Hunt Morgan crossed the Ohio River from Kentucky into Corydon.  Known as "Morgan's Raiders," they overwhelmed about 400 members of the Indiana militia and plundered their way through several towns, including Salem, Vernon, Dupont, and Versailles.  Fearing an attack on the state capital, Governor Oliver P. Morton ordered five regiments of Union soldiers to guard the Indiana Statehouse.  The Confederates escaped into Ohio where they were captured about three weeks later.

1913     The Senate Avenue YMCA, at the corner of Senate Avenue and Michigan Street in Indianapolis, was dedicated in ceremonies led by Dr. Booker T. Washington.  In his remarks, the well-known author and educator said, "Through this building every discouraged young man should be reached and a new ambition and friendly courage put into him."  While in the city, Dr. Washington was a guest in the home of Madam C. J. Walker.

1925     Indiana Governor Ed Jackson and his wife Lydia called upon President Calvin Coolidge at White Court, the Summer White House in Swampscott, Massachusetts (pictured.)  Reporters called it a "purely social call" and politics were not discussed as the President and his wife Grace hosted their fellow Republicans.

1945     Indiana colleges and universities prepared for a large influx of new students.  Veterans, home from World War II, were taking advantage of the G.I. Bill.  Enrollments were 70 percent higher than pre-war peaks.  School officials said that preference was being given to Hoosiers and that most out-of-state applications could not be accepted.

1966     The British rock group "The Rolling Stones" performed at the Fairgrounds Coliseum in Indianapolis.  Pat O'Rourke, reviewer for the Indianapolis News, wrote:  "To the delight of 10,000 screaming, rocking 'stonesters,' the Rolling Stones put on a rhythm-filled show. . .despite the debris hurled at the stage.  During their performance, paper cups, paper wads, and, during the final moments, pieces of broken chairs were hurled at the stylish quintet."

1974     The Auburn-Cord Automobile Museum opened in Auburn, Indiana.  Housed in the original Auburn car showroom, the museum contains some of the most beautiful cars in the world, including Auburns, Cords, and Duesenbergs, all built in Indiana.  Adding to the luxurious atmosphere are art deco chandeliers and sconces and geometric terrazzo floors.

In the early years of the 20th century, Indiana was a major player in the building of automobiles.  Some of the more famous names echo down the halls of history:  Auburn, Cord, Stutz, Maxwell, Marmon, Crosley, Studebaker, and, in a class all by itself, Duesenberg. These were the big names, but there were many other cars being built all around the state.  It is reported that, during those early years, there were more than 250 different makes of cars and trucks coming out of Indiana.  Shelbyville was home to two companies:  Clark and Meteor.  Buyers of the Clark paid $1400 for the 30-horsepower model.  The Indiana Motor Company in Franklin produced two models:  the Cameron and the Continental, a five-passenger touring car.  There were many other Hoosier nameplates, including Haynes and Haynes-Apperson (Kokomo,) ReVere (Logansport,) Sun (Elkhart,) Sheridan (Muncie,) and DeWitt (North Manchester) just to name a few. Studebaker held out the longest, manufacturing cars and trucks in South Bend into the 1960s. 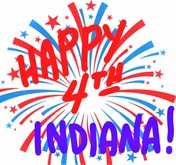 NOTE:  Due to the Coronavirus threat, tours of the Statehouse have been suspended until further notice.  You may still contact us by phone and e-mail. You are invited to take a "Virtual Tour" of the Statehouse by clicking the link at the bottom of this column.