2.  What is the name of the National Road as it passes through Indianapolis?  a/ Meridian Street   b/ Capitol Avenue   c/ 16th Street   d/ Washington Street

3.  Hoosier Entrepreneur Carl Fisher established what has been called the first "automobile road" across America.  It was called the ______Highway.

1829     Construction of the National Road entered Indiana at Richmond on the eastern edge of the state.  It would be five years before the road reached the western edge at Terre Haute.  Now known as U. S. 40, the thoroughfare played a major role in the development of the state and nation.

Hoosier Quote  of  the Week

"The highways of America are built chiefly of politics, whereas the proper material is crushed rock or concrete." - - Carl Fisher (1874-1939)

Born in Greensburg, Carl Fisher was a life-long entrepreneur who owned one of the first automobile dealerships, helped build the Indianapolis Motor Speedway, and took a swamp in Florida and developed it into Miami Beach.

1865     Robert Lincoln, his mother Mary Todd Lincoln, and his brother Thomas (Tad) Lincoln passed through Lafayette.  They were on their way to Oak Ridge Cemetery in Springfield, Illinois, where Abraham Lincoln was to be buried.  The body of the fallen President was traveling from Washington on a special funeral train.  Pictured:  Robert Lincoln 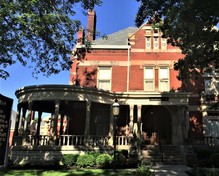 1892     The Executive Committee of the Local Council of Women met for the first time at the Propylaeum in Indianapolis (pictured.)  The organization was created to provide a forum for women's clubs engaged in civic reform.  Among the issues were women's suffrage, public sanitation, and child labor.  In 1926, the name of the Local Council was changed to the Indianapolis Council of Women.

1921     One guard was killed and two inmates injured in an escape attempt at the Jeffersonville Reformatory.  Six prisoners, who had recently been denied pardons, killed guard John H. Grimm and broke out of their cells.  They waged a 90-minute gun battle with guards and police before surrendering.  Much credit was given to Harry Goldman, a trusty who helped foil the escape plan and alerted the guards.

1955     Shoppers in Indianapolis, Muncie, Greensburg, and other cities were enjoying a bread price war.  Sliced bread, which had been 21-cents a loaf, was dropped to 15-cents by the Continental Baking Company.  Almost immediately, the makers of Colonial Bread, Taystee Bread, and Yum Yum Bread matched the 15-cent charge.  The price war was evidently started when Standard Groceries and A&P stores offered their bread at 17-cents.

WONDER BREAD, one of the most famous food products of the 20th century, had its origins in Indianapolis.  In 1921, the Taggart Baking Company, already locally famous for its bread, pastries, and butter crackers, invested heavily in new bread-making equipment.  Their aim was to produce a larger loaf with smoother, more even texture and softer crust.  While developing the new product, company vice president Elmer Cline attended the International Balloon Race at the Indianapolis Motor Speedway.  The sight of the huge, colorful hot-air balloons rising into the sky filled Cline with wonder.  He realized at that moment that he had a name for the "wonderful" new bread.

1971     Thousands of teens across Indiana participated in a "Hunger Walk."  The event, sponsored by the American Freedom from Hunger Foundation, took place in 20 Hoosier cities.  Participants in Indianapolis, Fort Wayne, South Bend, Muncie and other cities carried a variety of signs urging fellow citizens to donate to the campaign.  One sign said, "Don't Scrooge Me - Feed Me."  The routes covered large areas of the cities involved. Some teens in Indianapolis walked 27 miles.