1866     Actress Laura Keene and her theatrical company presented the play "Our American Cousin" at Hamilton's Hall in Fort Wayne.  Miss Keene had starred in the same play at Ford's Theater in April of the previous year when President Abraham Lincoln had been assassinated.  With her was actor Harry Hawk who had also been on stage at Ford's and whose character had spoken the last words ever heard by Lincoln.

1917     Nellie Brown of Indianapolis was arrested outside the fence of the White House.  She and other women from around the nation were picketing the Executive Mansion in an effort to persuade President Woodrow Wilson to support a constitutional suffrage amendment.

1938     Indiana author Theodore Dreiser spoke at the meeting of the Scholastic Press Association at the Claypool Hotel in Indianapolis.  Dreiser, from Terre Haute, urged Americans to send food to both sides in the Civil War in Spain.  He told graphic stories of conditions he had found on a recent visit there.

1942     Modoc, an Indian elephant who had roamed Wabash and Huntington Counties for four days, was captured near Mt. Etna, Indiana.  She had escaped from a circus in Wabash and created quite a stir as she wandered through the countryside.  The 1900-pound pachyderm was captured when her owner, accompanied by elephant playmates Judy and Empress, tempted her with 30 loaves of bread.  Modoc's meanderings had attracted national attention.

1963     The first touch-tone telephones went into production at the Western Electric plant on the east side of Indianapolis.  The new phones eventually replaced the rotary-dial models which had been in use for over 60 years.  The Indianapolis facility served the entire Bell System, producing 30,000 phones every day.

1986     Hoosiers made its world premiere at the Circle Theater in Indianapolis.  Loosely based on the 1954 Milan High School basketball team, the movie was shot entirely in Indiana.  Film critic Roger Ebert awarded the picture a full five stars.  "Hoosiers works a magic," he wrote, "in getting us to care about the fate of the team and the people depending on it . . . it is a movie that is all about heart." 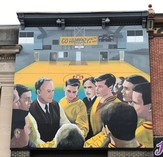 This mural on a building in Knightstown reveals a scene from "Hoosiers." The "home gym" for the movie is in the city.

The movie Hoosiers was all about Indiana's love affair with high school basketball.  Many vintage gymnasiums around the state were used in the filming, but the "home" gym for the fictional Hickory Huskers was in Knightstown in Henry County.  That facility, seen so many times in the classic movie, has been frozen in time and is now open for tours.  And, yes, they still have some spirited roundball games there, too!

The 2020 Census is coming soon.  Information gathered will be used to inform community decisions.  It is like a snapshot that helps define who we are as a community.  Data from the census will be crucial to many planning decisions.

HOOSIER  QUOTE OF THE WEEK

Brand new gift idea!  An exquisite pin showing the beautiful colors of the stained-glass high above the Statehouse Rotunda.

Watch HOOSIER HISTORY HIGHLIGHTS live from the Indiana Statehouse each Friday morning at 9:00!

NOTE:  The Statehouse will be closed on Veterans' Day, Monday, November 11