Aurora’s Paramount Theatre will present a free virtual reading of Pretended, a new play about a Haitian adoptee in search of truth and identity, written and directed by Chicago actor, playwright and director Lanise Antoine Shelley, Thursday, January 14, at 7 p.m. CT. Tickets are free but reservations are required. Reserve online at ParamountAurora.com/Inception-Project.

Pretended is a dramatic comedy in which writer/director Shelley draws from her own life experience as a Haitian adoptee raised by a single white mother to dissect and debunk misconceptions around adoption and move audiences to a place of racial healing. Shelley achieves this with her story about Elly, an intercultural adoptee who finds herself pregnant and moving to Seattle to gain familial support. As told from the rare lens of an adoptee’s perspective, Elly, and the audience, are confronted with the definition of family and how we cannot always choose the route in which we love someone.

Lanise Antoine Shelley (playwright, director, she/her) is a Haitian adoptee, actress, director and playwright. Pretended, her first full length play, was written during quarantine, spurred by the murder of George Floyd. Shelley is also the creator of the Interracial Adoptee Panel Series sponsored by United States Foundation for the Children of Haiti. She presently hosts the podcast "When They Were Young: Amplifying Voices of Adoptees" available on all major platforms including her website laniseantoineshelley.com. As a writer, Shelley has also worked this year with Chicago Children's Theatre in their Springboard Initiative to develop her TYA show Bread. As an actress, she is known for Chicago Fire, Empire, Chicago Med, Discovery World, Macbeth HD and Goodman Theatre's live stream of School Girls: African Mean Girls. Selected directing credits include: Rastas and Hattie, Black & Blue, Movement consultant for Muthaland (16th St Theatre), Hear Me See Me (Silent Theatre), The Luck of the Irish (virtual reading), Identity Lab (Lookingglass Theatre), The Tenant (Akvavit Theatre), RefuSHE Project (Voices & Faces Project), Rumors (DePaul University) and a staged reading of The Convert (Stratford Shakespeare Festival). She holds a BFA in Directing, Acting and Playwriting from Cornish College of the Arts, an MFA from ART/MXAT at Harvard University, and a certificate in Classical Theatre from both BADA in Oxford, England, and Birmingham Conservatory in Canada. Awards/Fellowships include Stratford Shakespeare Festival’s Chicago Fellow 2016 and Victory Gardens Theatre’s Directing Fellow 2019. She will be directing Goods at Artemisia Theatre in 2021.

‌More about The Inception Project

Long known for its blockbuster stagings of popular Broadway musicals, Paramount Theatre also has begun to develop new works through its Broadway Series, including the world premiere musicals August Rush in 2019, and The Secret of My Success in 2020, Jeff-nominated for Best New Work. Earlier this fall, Paramount School of the Arts also received a grant from the National Endowment of the Arts (NEA) to commission and develop a new play for young audiences by a BIPOC writer to tour area high schools.

Paramount’s new Inception Project, supported by a $40,000 Healing Illinois grant from the Illinois Department of Human Services in partnership with The Chicago Community Trust, is part of a bold statewide initiative to address and heal harms caused by racism.

The reading is followed by a live, interactive discussion in which Shelley and a panel of outside experts will reflect on the play and respond to audience questions. Panelists include Dr. Juliana Deans, a Ph.D. in Marriage and Family Therapy and an interracial adoptee who has reunified with biological family members; Melissa Guida-Richards, an adoptee, podcaster and author of the forthcoming book “What White People Should Know about Transracial Adoption”; Dr. Charmaine Borda, an Afro-Caribbean immigrant from Jamaica who survived abuse in and out of the foster care system; and Douglas Brown, whose family adopted three biological sisters from Perú eleven years ago.

In addition to Pretended, Healing Illinois is supporting the rehearsals, recording and Inception Project presentation of Bull: a love story, Chicago playwright Nancy García Loza’s very personal work about a young Mexican American man’s path to self-actualization. The reading, directed by Laura Alcalá Baker, will be presented virtually Thursday, January 28 at 7 p.m. CT. Tickets are free but reservations are required. Reserve at ParamountAurora.com/Inception-Project.

﻿The Inception Project is led by Amber Mak, Paramount New Works Development Director since 2016, and Paul-Jordan Jansen, Artistic Associate for The Inception Project. Jansen is familiar to Chicago theater audiences as the Jeff Award-winning actor in the title role of Sweeney Todd, as the Cowardly Lion in The Wizard of Oz, and most recently as The Beast in Disney’s Beauty and the Beast, all at Paramount. 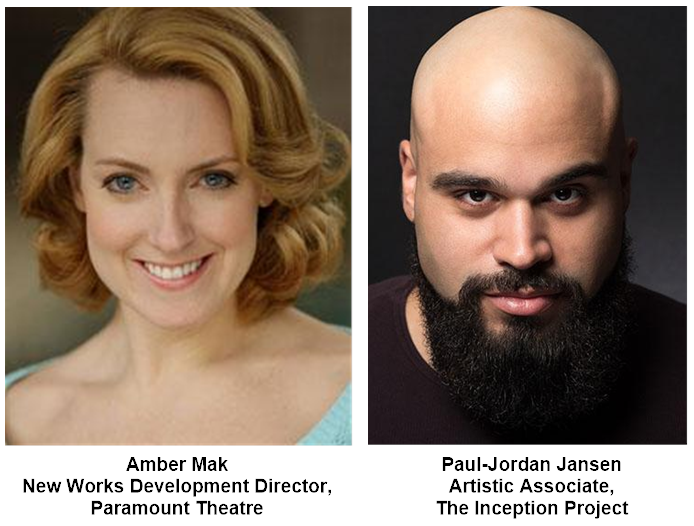 ﻿"As an organization that has been on pause from producing in-person shows, we have had a lot of time to reflect on our past and look toward the future as we focus on how to be a vehicle of change within the theater community to create more equitable, diverse and inclusive spaces,” said Mak. “We know this is just the beginning of work that will change the landscape of the American theater canon in an exciting and long overdue way and we are honored and thrilled for this opportunity."

﻿“The Healing Illinois Grant speaks of seeding connection, and that’s exactly what The Inception Project will do. It’s about opening our doors to voices we haven’t heard from yet, welcoming them to grow roots within our organization,” said Jansen. “With The Inception Project, we are making the commitment to foster and showcase stories written by BIPOC artists and other marginalized voices so that they continue to be written and produced. We are building relationships with the voices who will be the future of this industry, and we’re tremendously excited for this endeavor.“

Paramount intends to make The Inception Project an annual launch pad for future productions of new plays and musicals developed through the program, including potentially full, world premiere stagings as part of the new BOLD Series Paramount intends to launch in the 165-seat Copley Theatre, its newly-renovated sister stage.

Healing Illinois is a racial healing initiative of the Illinois Department of Human Services (IDHS), in partnership with The Chicago Community Trust, designed to distribute $4.5 million grants to organizations across the state to begin, or continue, the work of racial healing.

The goals of Healing Illinois are to:

Since Paramount Theatre first launched its own Broadway Series in 2011, it has grown to be the second largest subscription house in the U.S. More than 41,000 subscribers come from all over Chicagoland and the Midwest last season to enjoy Paramount’s affordable, critically acclaimed, Broadway-quality productions. In addition to its Broadway Series, Paramount presents an array of internationally known comedians, music stars, dance events and family shows. Community members also enjoy Paramount’s Classic Movie Monday series for just $1.

Paramount is one of three live venues programmed and managed by the Aurora Civic Center Authority. ACCA also oversees the newly-renovated, 165-seat Copley Theatre, right across the street from Paramount; RiverEdge Park, the city’s outdoor concert venue; and the new Paramount School of the Arts. For the latest news from Paramount Theatre and updates on upcoming performances, please visit ParamountAurora.com.