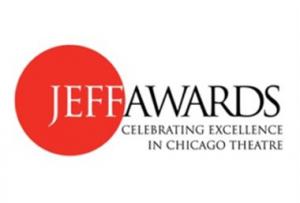 The 52nd annual Jeff Awards, recognizing theater excellence among Equity theater productions, will be presented this fall as an online program. In preparation for this program, the 2020 Equity nominations will be publicly announced on Tuesday, September 15th along with the date when the program will be available. The online program, designed to protect the health and safety of the community and comply with government guidelines on public gatherings, follows the well-received format the Jeff Awards embraced this past June to celebrate the season’s Non-Equity theaters.

Chicago Equity theater company productions eligible for 2020 Jeff Awards were staged from August 1, 2019 through March 13, 2020. Traditionally, the Equity season extends through July 31st. However, due to the COVID19 outbreak, the eligibility period ended with the theater community’s cancellation of shows after March 13th. To make as many productions as possible available for awards consideration during these unprecedented times, requirements on the length of the run for productions that opened prior to March 13 were also relaxed.

During the shortened 2020 season, Jeff Awards members attended 78 of productions of eligible Equity theaters. In an average season, members attend approximately 130 Equity theater performances. Of the 2020 season, approximately 80% were designated as “recommended.” From the shows recommended for excellence in any one of more than a dozen artistic and technical categories, Jeff member ballots are tallied to determine the top vote recipients (nominees). The membership votes on the official nominees, and this fall, the final awards will be announced during an online program (details on date and time to be announced).

“This season brought a wonderful range of stories and performances to Chicago stages and there is a lot to celebrate, despite the pandemic and civil unrest that interrupted some openings and production runs this spring and summer. We are so fortunate to have so much creative, recognition worthy work on Chicago stages, so we knew that a show needed to go on this fall,” said Jeff Awards Chair John Glover. “During these times, it is even more important to remember and promote the value that the arts bring to our lives and the vital role theater plays in opening ourselves up to a variety of perspectives.”

ABOUT THE JEFF AWARDS

Promoting excellence in Chicago theater, The Jeff Awards began its annual recognition program in 1968. In 1973, it expanded its scope to establish the Non–Equity Wing to celebrate outstanding achievement in non–union theater. Members include 55 individuals representing a wide variety of backgrounds in theatre (including producers, directors, actors, playwrights, designers, professors of theater, entertainment lawyers and agents, and theater lovers), the Jeff Awards is committed to celebrating the vitality of Chicago area theatre by recognizing excellence through its recommendations, awards, and honors. Opening night judges include not only the members but also Artistic and Technical theater volunteers (the “AT Team”), including Artistic Directors, producers, directors and artists from Chicago theaters. The Jeff Awards fosters the artistic growth of area theater companies and artists, and promotes educational opportunities, audience appreciation, and civic pride in the achievements of the theater community. Each year, the Jeff Awards judges over 300 theatrical productions and host two awards ceremonies.  For more information on the organization or to learn more about membership, visit https://www.jeffawards.org/faq.