Adults-Only Laughs at "Who's Holiday" - Review by Carol Moore 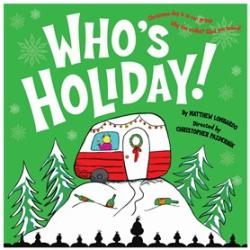 **** Highly Recommended **** If you’re looking for some adults-only holiday cheer and a raucous good time, head for Theater Wit and the reprise of Who’s Holiday, a 2021 smash hit, one-woman show, starring Veronica Garza as 40-something Cindy Lou Who.  You might remember a certain cartoon, and a cute little tot who caught a green guy stealing her Christmas tree.  That was then, this is now!  This Cindy Lou Who has a story to tell – and everything she says is in rhyme!  Garza has incredible comic chops, so Who’s Holiday is raucous, raunchy and absolutely hilarious.  4 Spotlights

The trailer door opens, Cindy Lou Who, wearing a red cape trimmed with white fur, steps in, spots the audience, gasps, yells “What the f**k” and drops her packages!  Then she pours herself a stiff drink – for her nerves – before taking off her boots and putting on her sparkly crocs.

She says she’s having a party tonight, so she needs to get everything ready as she pours ice into the ice bucket and puts a tray of goodies in the oven.  As she mixed herself another drink, she offered one to a guy in the first row. She asked his name, they had a little conversation and talked about/to him the rest of the evening.

When her doorbell rang, she opened the door to snowballs thrown by the neighborhood kids.  When this happened a second time, she complained that her outfit was soaked so she changed into a dark red, Christmas print dress with a bright red belt, worn over black print leggings.

When Cindy Lou Who chatted with the audience – there’s no fourth wall here – she had a lot to say, a lot of it profane (dropping F-bombs frequently) but always funny – and always in rhymes.

The phone rang several times, with someone (often characters from the Seuss books) calling to cancel.  Each phone call meant she poured another drink.  Finally, she took that pan of pigs-in-the-blanket out of the oven, ate one, then walked over and shared them with people in the front row.  After throwing one against the wall, she told everyone in the ‘cheap’ seats to buy more expensive seats.

Cindy Lou Who shared all the intimate details of her life.  Her fascination with the furry green guy started when she woke up in the middle of his Christmas heist.  I don’t want to spoil Cindy Lou’s story for you, so I won’t tell you anything about her later relationship with him, except to say it’s complicated.

Angela Weber Miller’s set, a teeny tiny trailer totally decked out for Christmas with lights and decorations is a sight to see.  A teeny tiny kitchen, with a teeny tiny stove and refrigerator, has a table with one chair.  Note the shelf above the stove is filled with booze bottles.  On the opposite end, there’s a built-in bed with a bench in front, a TV tray and a Christmas tree.  The door is in the center.  Tacky is an understatement!

Incidentally, the New York opening of Who’s Holiday was delayed for almost a year while playwright Matthew Lombardo was in a legal battle with Dr. Seuss Enterprises.  He won in the end when the court ruled his depiction of an adult Cindy Lou Who living in a trailer was “fair use.”

Note: Guests are required to wear masks while in the theater, but not in the lobby.

Parking is available in Theater Wit’s lot across the street.