Announcing Chicago Shakespeare in the Parks Virtual Programming for 2020

In partnership with the Chicago Park District, Boeing, and BMO Harris Bank, Chicago Shakespeare Theater announces today programming for this summer’s Chicago Shakespeare in the Parks. Due to COVID‑19 health and safety measures mandated by the City of Chicago, all Chicago Park District Night Out in the Parks events—including the Chicago Shakespeare in the Parks tour—will move online for Summer 2020. To carry on the program’s community-building spirit, the Theater will embark on a Virtual Tour highlighting the vitality of our city’s neighborhoods with nightly streamed “Green Show” performances from local artists, and encourage Chicagoans of all ages to bring Shakespeare to their own outdoor settings with #MyMidsummerCHI, now through August 28, 2020. 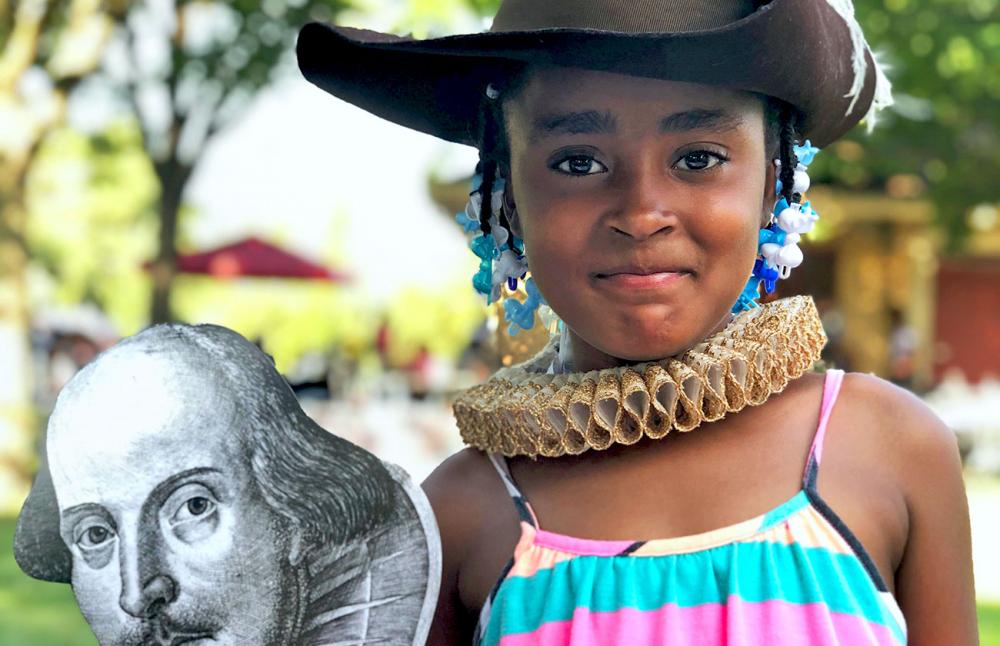 On Friday, August 28 at 5:30 p.m., viewers can tune into a Chicago Shakespeare in the Parks broadcast special on WTTW Channel 11, celebrating the free community program that has reached 175,000 audience members since its inception in 2012. Produced in partnership with HMS Media, the 30‑minute broadcast will feature illuminating interviews with artists, community leaders and partner organizations, revisit memorable moments from past years' tour productions, and highlight this summer’s inventive virtual programming.

The Chicago Shakespeare in the Parks Virtual Tour offers Chicagoans the opportunity to engage online with 18 parks and the community organizations, local businesses, and artists that make them such an essential part of the fabric of our city. Beginning Monday, August 10, Chicago Shakespeare will highlight one park and its surrounding community each day on the Theater’s website and social media platforms. Every day at 5:30pm, the Theater will stream a performance from an artist local to the featured neighborhood, continuing the longstanding Chicago Shakespeare in the Parks tradition of a “Green Show.” Since the program’s inception, more than 800 artists have been featured in these performances, inspired by the pre-show entertainments of Shakespeare’s day.

“The Chicago Shakespeare in the Parks program has become a local symbol for increased access to and participation in the arts, and we are proud to stand alongside them once again as we move to a virtual program for summer 2020,” said Cheri Carter, vice president of Boeing Global Engagement. “Through local partnerships with hundreds of neighborhood organizations—many of which are spearheading COVID-19 relief efforts in areas hardest hit by the virus—Chicago Shakespeare is showing that by coming together, we can bring vitality to our communities through support of the arts.”

#MyMidsummerCHI invites community members to bring moments from Shakespeare’s A Midsummer Night’s Dream to life in their local parks, community greenspaces, balconies, and backyards. Chicago Shakespeare has provided a simple activity script, suitable for individuals, families, or socially distanced groups of all ages. Participants are encouraged to record their own open-air rendition of brief lines and scenes from the play and share on social media with the hashtag #MyMidsummerCHI.

“At a time when our greenspaces feel more essential than ever, we are thrilled that we can reach every park this summer through this collective reimagining of one of Shakespeare’s most whimsical and wonder-filled comedies,” said Artistic Director Barbara Gaines. “ Even during this time of physical separation, we can forge new ties with one another and share in the magic of speaking aloud these immortal words, surrounded by the beauty of nature in all its different forms and places.”

This year’s programming is made possible by a renewed civic, cultural, and corporate partnership between Chicago Shakespeare Theater, the Chicago Park District, Boeing, and production sponsor BMO Harris Bank.

“2020 has been a year unlike any other, but that doesn’t change the importance of providing everyone with access to theater, in this case through virtual programming,” said David Casper, U.S. CEO, BMO Financial Group. “We are very proud to continue to sponsor Chicago Shakespeare in the Parks to help them share their dynamic programming with community members across the city."

This summer’s Chicago Shakespeare in the Parks initiative will be featured as part of the Chicago Park District’s Your Night Out at Home platform featuring digital performances from Night Out in the Parks artists and cultural organizations, including theater performances, concerts, community workshops, nature-based programs, and dance performances. Performers will also be highlighted in the Chicago Park District’s “Stars in Your Own Backyard” series airing on WTTW Channel 11 on Fridays, beginning July 31. Now in its eighth year, Night Out in the Parks annually presents more 1,200 free cultural events in every one of the city's 77 community areas and all 50 wards.

Chicago Park District Day Campers at more than 100 camp locations will also have the opportunity to explore A Midsummer Night’s Dream with an interactive performance activity developed by Chicago Shakespeare’s award-winning Education team. Facilitated by camp staff, campers will create their own abridged narrated production to be performed outdoors in parks across the city.

ABOUT CHICAGO SHAKESPEARE THEATER
Under the leadership of Artistic Director Barbara Gaines and Executive Director Criss Henderson, Chicago Shakespeare has redefined what a great American Shakespeare theater can be—a company that defies theatrical category. This Regional Tony Award-winning theater’s year-round season features as many as twenty productions and 650 performances—including plays, musicals, world premieres, family programming, and presentations from around the globe. Chicago Shakespeare is the city’s leading presenter of international work and has toured its own productions across five continents. The Theater’s nationally acclaimed arts in literacy programs support the work of teachers and bring Shakespeare to life on stage for tens of thousands of students annually. Each summer, the company tours a free professional production to neighborhood parks across Chicago. In 2017 the Theater unveiled The Yard, which, together with the Jentes Family Courtyard Theater and the Thoma Theater Upstairs, positions Chicago Shakespeare as Chicago’s most versatile performing arts center.

Black. Lives. Matter. Chicago Shakespeare is committed to ensuring racial equity and justice in our art making and in our workplace. We pledge to deepen this commitment by continuing to listen, learn, and use our voice and actions to help dismantle racism in our world. More >