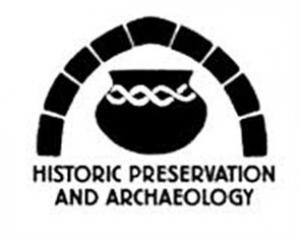 Per state statute (Indiana Code 14-21-1-12), one of the duties of the DHPA is to develop a program of archaeological research and development, including the publication of information regarding archaeological resources in the state. This journal is one of the ways that our office continues to address that mandate, and we hope you enjoy reading the interesting articles.

State Archaeologist Amy Johnson, Editor of Indiana Archaeology, thanks the following individuals for their work on this latest volume: Guest Editor Dr. James R. Jones III, her co-workers at the DHPA, and her colleagues who conducted peer reviews of the articles. The authors who submitted their work for inclusion in the volume are also thanked for their valuable contributions. 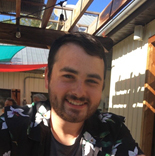 Archaeology Intern - Ryan Pietras is graduate student with the University of Indianapolis. He is currently pursuing an ethnoarchaeological thesis about legend tripping in Indiana, and is interning with the DHPA under Research Archaeologist Rachel Sharkey. While here, Ryan will be digitizing the archaeology film archives and creating an accompanying catalog.

Archaeology Site of the Month - The Shrader-Weaver Site (12-F-446) is a mid-1800s homestead site attributed to the Shrader and Weaver families of Fayette County, Indiana. These were prominent families in the Bentonville area. The main goods produced at the farm were molasses and maple sugar, which could potentially lead to a unique archaeological record at the site. After the Shrader and Weaver families passed, the property was bought by the Nature Conservancy, which then sold the land to the State of Indiana. Today, the property is managed by the Indiana Department of Natural Resources (DNR) as part of the Shrader-Weaver Nature Preserve.

Archaeological monitoring was completed by the DNR-DHPA in 2006 during excavation of additional drainage lines around the home (Draeger-Williams 2019). A majority of the artifacts recovered were found along the southern side of the house behind the kitchen, near the cistern, and in the suspected location of the garden. Most of the artifacts were for domestic use. Historical ceramics consisted of 72% of the assemblage, which included various types and styles of 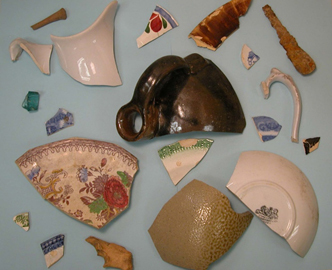 A sample of the historic artifacts recovered from the Shrader-Weaver site during monitoring for drainage lines around the home.

Although there is a lot of historical information that is known about the Shraders and Weavers, the artifacts recovered from the site show us a more intimate portrait of the families. There is much more that could be learned about the site, as fieldwork was only completed around a small portion of the property near the house. Additional archaeological investigations at the site could provide information on the early molasses and maple sugar industries, as well as a regional perspective of the Shraders, the community near Bentonville, and rural Fayette County.

Professional Corner - On Dec. 30, 2019 archaeologist Michael W. French was tragically killed. Michael began his career at the Kentucky Transportation Cabinet.  From there, he went to AMEC Earth & Environmental (now Wood) in Louisville, Kentucky where he was a senior project manager. Mike worked throughout the Eastern United States. In addition to being a talented archaeologist, he was very active in his church at Highland Baptist, and worked to further justice for all, primarily immigrants.  He was devoted to his family.

Most of his work in Indiana was done in the southern part of our state. His interest was primarily in hunter-gatherer societies, and he visited a tribe in Columbia gaining important first-hand knowledge of these societies. Michael’s Master’s thesis was on Early Archaic settlement mobility and lithic resource use in the lower Ohio Valley, based on a site located below the Falls, namely the Longworth-Gick site. Perhaps his most well-known project involved the multi-year excavation of the Shippingport site, a multi-component site located at the Falls of the Ohio. The primary component was Mississippian, but Woodland and Archaic components were also present. Michael co-authored a chapter on the later portion of the Mississippian Period at the Falls which includes some discussion on some sites in southern Indiana such as Ellingsworth and Smith-Sutton. The chapter will be included in a book being published by University of Florida Press entitled FALLS OF THE OHIO ARCHAEOLOGY: 12,000 YEARS OF NATIVE AMERICAN HISTORY which is currently in its final review.

To honor him, this month’s professional corner highlights one of his reports covering the Phase III data recovery of site 12-Cl-199. This site will be among many Indiana sites that are mentioned in the upcoming Falls book.

The Clark County site encompasses over 10 acres on a linear ridge overlooking the Muddy Fork of Silver Creek floodplain. The primary occupation of the site dates to the Late Archaic period and represents a substantial French Lick Phase component. Feature types documented include hearths, earth ovens, post molds and other pit features. Matanzas, Brewerton and McWhinney projectile points were well represented. The research explores the site structure, regional precontact chronology and technology, Archaic subsistence patterns and regional settlement systems. The Late Archaic occupation of site 12-Cl-199 was interpreted to be repeated short duration events by small groups of people rather than the classic interpretation of a Late Archaic base camp. To access the report, search SHAARD report number AR-10-00452.

This information is distributed via email by the Indiana Department of Natural Resources, Division of Historic Preservation and Archaeology (DHPA). This is meant to provide information on current archaeological topics and issues in which the DHPA is involved. An archive of past Archaeology News issues is available. If you have any questions, do not hesitate to contact our office at 317-232-1646.

Mission Statement: The Division of Historic Preservation and Archaeology promotes the conservation of Indiana’s cultural resources through public education efforts, financial incentives including several grant and tax credit programs, and the administration of state and federally mandated legislation.