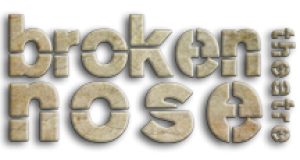 Broken Nose Theatre is pleased to present BECHDEL FEST 8: REALIGN, the company’s annual festival of new short plays featuring an ensemble of femme, female-identifying, non-binary, trans and queer actors talking about things other than men. This year’s festival showcases eight stories that center around characters who find themselves at pivotal moments, as new circumstances push each of them to reconsider both their identity and their place in the world. BECHDEL FEST 8 will stream for free from January 29 – March 26, 2021 on BNT’s YouTube channel, with a new play released each Friday for an entire week before it’s removed and a new play is broadcast.

All the works in BNT’s perennial feminist festival are inspired by the famous Bechdel-Wallace Test. Created by cartoonist Alison Bechdel, the test asks whether a work of entertainment features at least two non-male identifying characters in conversation about something other than a man. Since the fest's first iteration in 2013, Broken Nose has worked with some of the most exciting voices in the Chicago theater landscape on over 50 stories that, by design, do not revolve around men. For additional information, visit brokennosetheatre.com.

Comments BNT Artistic Director Elise Marie Davis: “Many of the immensely talented artists involved in this season's festival have been signed on since last spring, back when we were expecting to host the event in-person during the summer. The fact that they graciously and enthusiastically stayed onboard as this year's lineup was pushed back, and ultimately pivoted to becoming digital, is enormously exciting to the Broken Nose family and myself. This week-by-week release structure is brand-new to us, but we're thrilled to bring the magic of the fest into audiences' homes, virtually and entirely free-of-charge. We look forward to sharing these stories with you!”

Friday, February 12 – How Strong is Your Tree Pose?

Friday, February 26 – The Ladies Next Door 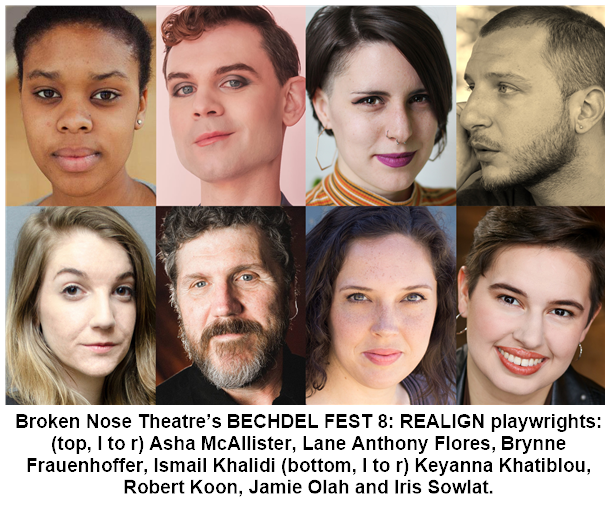 Lane Anthony Flores is a Queer actor, writer, poet and classicist based out of Chicago. In 2011, he helped found and manage Adapt Theatre Productions, which produced his original works Below, a verse adaptation of The Little Mermaid, and Pride and Prejudice, an adaptation set to the music of Taylor Swift. As an actor, he is represented by DDO Chicago and has appeared onstage at Chicago Shakespeare Theater, Steppenwolf, About Face Theatre, Raven Theatre, The Gift Theatre, and others. Currently, Lane is pursuing study in classics (Greek and Latin language and culture) with a focus in Greek tragedy. Lane is so excited about this piece, and beyond thankful for the folx at Broken Nose Theatre! He is also so thankful for you, the person reading this. Thank you, so much, for supporting live theatre and the arts!

Ismail Khalidi was born in Beirut to Palestinian parents and raised in Chicago, and has since written, directed, performed, curated and taught internationally. Khalidi's plays include Tennis in Nablus (Alliance Theatre, 2010), Truth Serum Blues (Pangea World Theater, 2005), Foot (Teatro Amal, 2016-17), Sabra Falling (Pangea World Theater, 2017), Returning to Haifa (Finborough Theatre, 2018) and Dead Are My People (Noor Theatre, 2019). Khalidi's plays have been published in numerous anthologies. His writing on politics and culture has appeared in The Nation, Guernica, American Theatre Magazine and Remezcla. His poetry and plays have been published by Mizna, and he co-edited Inside/Outside: Six Plays from Palestine and the Diaspora (TCG, 2015). Khalidi has received commissions from the Actors Theatre of Louisville, Noor Theatre, Pangea World Theatre and The Public Theatre, and is currently a Visiting Artist at Teatro Amal in Chile. He holds an MFA in Dramatic Writing from NYU's Tisch School of the Arts.

Keyanna Khatiblou is an LA-based playwright. She has been published by Samuel French, produced Off-Broadway as part of Theatre Masters National MFA Playwrights Festival, and was recently a finalist for the Alliance/Kendeda National Graduate Playwriting Competition. Her plays have been developed with Chicago companies including Theater on the Lake, The New Colony, About Face Youth Theatre, Prop Thtr, the Jackalope Playwright's Lab and the Chicago Women's Theater Alliance. She has been commissioned and produced by the Evanston Children's Theater three times to write female-focused adaptations myths and fairytales. Keyanna is currently a Core Apprentice with the Playwrights' Center. BA: Univ. of Arizona, MFA: Northwestern, 2020.

Robert Koon is a Broken Nose ensemble member, writing for his third Bechdel Fest. He was last seen onstage for BNT as the venal, yo-yo spinning Howard in Labyrinth. Other recent appearances include A Dickens Carol at Madison Street Theatre, Casa Valentina for Pride Films and Plays and Fun Harmless Warmachine for The New Colony. Robert is also a Resident Playwright Alumnus at Chicago Dramatists and The William Inge Center for the Arts. He is a member of the Dramatists Guild of America. Love to JM and Dr. K.

Asha McAllister is a playwright, potter, costume designer and theatre critic. After graduating with a BA from Kenyon College, Asha became the first playwright in residence and a company member of 20% Theatre Company. She has had two readings of her full-length Crabs in a Barrel and readings for her shorts It’s About A Sandwich, Me, You, and the Cat, Aiding and Abetting and Some Day. Coming up, she will have a staged reading of her full length Some Kind of Nightmare. Peace and long life. Live long and prosper.

Jamie Olah is a Chicago playwright specializing in the development of highly visual, movement-driven plays that celebrate the heroic stories of women and girls. She is the Founder of Chicago Playwrights Group and served as a company member with Dal Vivo and The Moving Dock Theatre Co. Her works have been presented at The New Colony, The Arc Theatre, Links Hall, Clock Productions, Red Tape Theatre, Dell’Arte International, Food & Performance, and others. Jamie is a theatre educator with over 13 years of experience empowering students of all ages to craft and share their stories. She is a three-time recipient of grants from the City of Chicago DCASE. She holds a BFA in Theatre Performance from Viterbo University. jamieolah.com.

Iris Sowlat is thrilled to write for Bechdel Fest and to bring this story to life! She returns to Broken Nose after directing for Bechdel Fest 5 and assistant-directing Human Terrain in 2016. Primarily a director, credits include Joan of Arc, Underworld Anthem and The Anxiety Variety Show (Prop Thtr’s Rhinofest), The Days Are Shorter (Pride Films & Plays), ABCD (Piven Theatre’s Lab) and Narratives of Achromatopsia (Chicago Fringe Festival). She has also worked with Northlight Theatre, American Blues Theater, About Face, and others. She is also the co-Artistic Director of Violet Surprise Theatre. “This play is for anyone who has had to pick up the pieces and make something brighter.” www.IrisSowlat.com.

Anna C. Bahow is a Chicago-based theatre director committed to the development of new work and a diversity of voices. She is an Artistic Associate with Silk Road Rising foregrounding Asian, South Asian and Middle Eastern artists, an Associate Artist with The International Voices Project bringing plays from around the world to Chicago, an Associate Artist at Chicago Dramatists and a member of Promethean Theatre. Bahow received an After Dark Award and her productions have received Jeff Awards for New Work and Use of Multi-Media. She was honored to have served as a Maggio Fellow at the Goodman Theatre, to be a recipient of a 3ARTS WAVE Grant and several Chicago Individual Artist Grants. www.AnnaBahow.com.

Benjamin Brownson (he/him) founded Broken Nose Theatre in 2012 and served as artistic director for the company’s first six seasons. Directing highlights for BNT include: My First Time, ROOMS: a rock romance, Human Terrain and several iterations of Bechdel Fest, which he co-created and for which he has also written multiple pieces. In addition to directing and playwriting, Ben has performed in the BNT ensemble hits At The Table and Labyrinth. He holds an MA in the Humanities from the University of Chicago, and currently works as a consulting associate with Morten Group, a multiracial, cross-generational group dedicated to social change and transforming organizations through assessment, education and action. He is delighted to return to his artistic roots with another round of his favorite feminist festival!

Lauren Katz is a freelance director, dramaturg and teaching artist. She served as the Artistic Apprentice at Steppenwolf Theatre Company for their 2016-17 Season, and as a fellow in the 2018-19 Directors Inclusion Initiative at Victory Gardens Theater. Recent directing projects include: Hershel and the Hanukkah Goblins (Strawdog Theatre), This is a Chair (Haven) and Women of 4G (Babes with Blades Theatre). As an assistant director and dramaturg in Chicago, Lauren has worked with various companies including: About Face Theatre, Firebrand Theatre, Goodman Theatre, Redtwist Theatre, Theater Wit, Steppenwolf Theatre, Victory Gardens Theater, Writers Theatre and Windy City Playhouse. As a teaching artist, Lauren works with Lookingglass Theatre, Mudlark Theater and Steppenwolf Theatre.

Aaron Mays is an emerging director and playwright in Chicago with a passion for stories of the African diaspora and the narratives of marginalized voices. Aaron’s most recent directing credits include Gem of the Ocean (South Bend Civic Theatre), 2 X 2 (Haven), Waiting for Godot (Tympanic Theatre) with an all-Latinx cast and Tug of War (CIRCA Pintig), a series of short plays on war, trauma and immigration. In addition, he has worked with Chicago’s top directors, serving as the assistant director for such productions as Sweat (Goodman Theatre), Two Trains Running (Goodman Theatre) and Whorl Inside a Loop (Second Stage). As a writer, Aaron's plays include Black Santa, Sticks and Stones and The Street Corner. Aaron is a proud graduate of Northwestern University.

Brenda Scott Wlazlo holds a BA in Theater from Florida State University and is the Audience Development Director at Broken Nose. She was most recently seen in Red Tape’s Jeff recommended production of All Quiet on the Western Front. In addition, she's worked at Chicago Kids Company, Redtwist Theatre, Red Theater, Chicago Slam Works, Tympanic Theater, Promethean and Red Tape Theatre (where she is also a proud company member). When not onstage, Brenda can be found in her voice studio narrating audiobooks and coaching. She has over 20 audiobooks published and can be heard on Audible, iTunes and more. You can check out her work at www.BswVoice.com.

Broken Nose Theatre is a Pay-What-You-Can theatre company. Founded in 2012, BNT was the 2018 recipient of the Emerging Theater Award, presented by the League of Chicago Theatres and Broadway in Chicago. The company has produced and developed 22 full-length plays (including 13 Chicago, U.S. or world premieres) and over 50 new short plays through our annual Bechdel Fest. We strive to spark conversation, cultivate empathy, and amplify underrepresented voices, and are committed to making new, exciting and relevant theatre that is economically accessible to all audiences. For more information, please visit www.brokennosetheatre.com.