BTE Opens 2020 with "The Cake" directed by Steve Scott

Buffalo Theatre Ensemble presents “The Cake” by Bekah Brunstetter, directed by Steve Scott, Jan.30-March 1 in the Playhouse Theatre at the McAninch Arts Center, 425 Fawell Blvd. The LA Times calls the play “funny and smart” and observes, “The Cake” explores human conflict from an insightful, slightly offbeat perch with understanding, respect and compassion for opposing points of view.” There will be a preview performance 8 p.m. Thursday, Jan 30; press opening is 8 p.m., Friday, Jan. 31. Performances run through March 1. 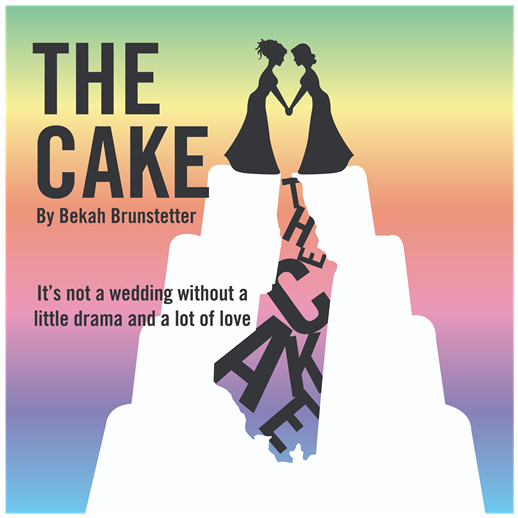 Della’s bakery in Winston-Salem, N.C. is a landmark, largely because of the love and care she takes in following recipes. When Jen, the girl she thinks of as her “goddaughter,” asks Della to make her wedding cake, not for one bride but two, it is hard for Della to follow one of her tried and true set of instructions for a perfect outcome. Faith, family and food impact one another in the discovery that love is the key ingredient to any recipe in this timely play from writer/supervising producer of NBC’s hit “This is Us.”

“The Cake” was inspired by events leading to the US Supreme Court case Masterpiece Cakeshop v. Colorado Civil Rights Commission and by her father's opposition to same-sex marriage. It premiered at Los Angeles’ Echo Theatre Company 2017. It has been widely produced since at locations including the La Jolla Playhouse and Houston's Alley Theatre. This past March, it had its Off-Broadway premiere at the Manhattan Theatre Club at New York City Center starring Debra Jo Rupp of the FOX sitcom, “That '70s Show,” as Della.

Bekah Brunstetter (playwright) is the daughter of former North Carolina Senator Peter S. Brunstetter. Her other plays include “Going to a Place Where You Already Are” (South Coast Repertory), “The Oregon Trail” (Portland Center Stage, O’Neill Playwrights Conference; Flying V) “Cutie and Bear” (Roundabout commission), “A Long and Happy Life” (Naked Angels commission), “Be A Good Little Widow” (Ars Nova, Collaboraction, The Old Globe), “Oohrah!” (Atlantic Theater Company, Steppenwolf Garage, Finborough Theater/ London), “Nothing is the End of the World (Except for the End of the World)” (Waterwell), “House of Home” (Williamstown Theatre Festival) and “Miss Lilly Gets Boned” (Ice Factory Festival). She is an alumna of the CTG Writers Group,

Primary Stages Writers Group, Ars Nova Play Group, The Playwright’s Realm and the Women’s Project Lab. She has previously written for MTV (“Underemployed” and “I Just Want My Pants Back”), ABC Family’s “Switched at Birth” and the Starz series “American Gods.” She is a past writer and supervising producer for NBC’s “This is Us.”

Steve Scott (director) returns for his seventh production at BTE, where he most recently directed “Miracle on South Division Street.” For more than 30 years he served as Producer at the Goodman Theatre, where he is currently an Artistic Associate; his directing credits there include “The Santaland Diaries;” “Ah, Wilderness;” “Vanya and Sonya and Masha and Spike;” Horton Foote’s “Blind Date;” the world premiere of Tom Mula’s “Jacob Marley’s Christmas Carol;” and six editions of “A Christmas Carol.”  Scott has directed for a wide variety of professional companies in Chicago and around the country; his most recent credits include “Why Torture is Wrong, and the People Who Love Them” at Eclipse Theatre (where he is an ensemble member), “King Lear” at Redtwist Theatre (where he is a company member), “The Legend of Georgia McBride” at Nebraska Repertory Theatre, “How to Kill a Diva” for the Jefferson Parish Performing Arts Center in New Orleans, “Working 2012” for the Dunes (Ind.) Summer Theatre and “Stage Door” for the Theatre Conservatory of the College of Performing Arts at Roosevelt University, where he has been on the faculty for more than two decades.  He has also taught at Columbia College Chicago, Loyola University of Chicago, Northwestern University, Northern Illinois University and the Latin School of Chicago; and serves on the board for Season of Concern, the Chicago theater community’s effort to provide assistance for its members who are battling serious illness or injury.  For his work as a director, Scott has received six Jeff nominations, an After Dark Award, and numerous Broadway World nominations; he received the 2017 Special Jeff Award for his contributions to the Chicago theater community and the 2018 Lifetime Achievement Award from the League of Chicago Theatres.

Buffalo Theatre Ensemble presents “The Cake” by Bekah Brunstetter, directed by Steve Scott, Jan.30-March 1 at the Playhouse Theatre of the McAininch Arts Center, 425 Fawell Blvd. There will be a preview performance Thursday, Jan 30; press opening is Friday, Jan. 31. Performances are at 8 p.m. Thursday-Saturday. and 3 p.m. Sunday. Tickets are $42. For tickets or more information, visit www.AtTheMAC.org or call 630.942.4000. Please note: this play contains adult themes and language.

ASL interpreters will be located near the stage for patrons who are deaf or hard of hearing, seated in an area of the theater that gives the best sight lines to follow the interpretation and the action on stage. To access reserved seating in view of the interpreters for a signed performance, call the box office at 630.942.2141or 630.858.9692 (TDD) or visit www.AtTheMAC.org for additional information.

The mission of Buffalo Theatre Ensemble is to provide a forum in which artists, scholars, writers, students and community members explore new ideas and provocative issues through the production of high-quality theater for the enjoyment of its audiences. Since 1986 BTE has staged more than 117 productions. For more information about BTE visit www.btechicago.com.

BTE thanks the DuPage Foundation for its support of the theater’s educational, outreach, and production capabilities and the Norm Woodel Inspiration Fund for its continued general support. BTE programs are partially supported through a grant from the Illinois Arts Council Agency.