Casting and production team have been announced for Pride Films and Plays Chicago premiere of DEX & ABBY – a new comedy by playwright Allan Baker. Dex and Abby are dogs with unique personalities, and when their owners move in together, all four members of the family have to figure out the rules of this new territory. Funny, touching, and a heartwarming tribute to our relationship with our furry best friends, DEX & ABBY is a comic delight. Daniel Washelesky, who previously assistant directed AFTERGLOW with Pride Films and Plays, is directing. The press opening is Monday, February 24, 2020, following previews from Thursday, February 20 through Sunday, February 23. 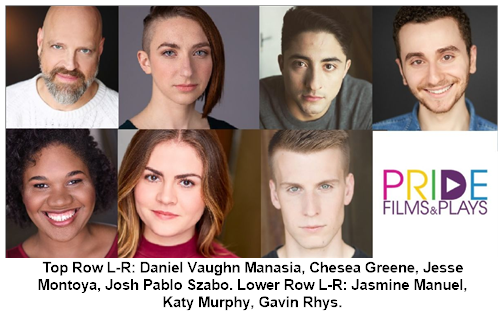 Casting for this Chicago premiere was announced today. The dogs of the title, who converse with each other, will be played by Daniel Vaughn Manasia (he/him/his) as Dex and Chesa Greene (she/her/hers) as Abby. Jesse Montoya (he/him/his, of PFP’s AFTERGLOW) and Josh Pablo Szabo (he/him/his, of Theo Ubique’s HELLO AGAIN) are Corey and Sean, the men who are Dex & Abby’s guardians (owners). Jasmine Manuel (she/her/hers) will play their friend Katy. Understudies include Gavin Rhys (he/him/his, Sean, Corey), and Katy Murphy (she/her/hers, Abby, Katy).

DEX & ABBY will play from February 20 through March 29, in a time slot originally planned for Pride Films and Plays’s US Premiere of THE PASS, which has been rescheduled for July 2 – August 9, due to scheduling conflicts. DEX & ABBY, which received its world premiere at the Ground Floor Theater of Austin, Texas in May of 2019, will be performed on the Broadway stage at the Pride Arts Center, 4139 N. Broadway.

When two men fall in love, what happens if their pets don't get along? Dex and Abby are dogs with unique personalities, and when their owners move in together, all four members of the family have to figure out the rules of this new territory. Funny, touching, and a heartwarming tribute to our relationship with our furry best friends, DEX & ABBY is a comic delight.

Allan Baker (Playwright) After retiring in 2001, Allan began writing in 2004 and has since written thirteen plays, all but one with gay characters and themes. Eleven of these plays have been produced from coast to coast in the US and from Guam to Ontario, internationally. In New York City, his plays have been produced by Emerging Artists Theatre, NativeAliens Theatre Collective for the New York City Pride Festival in 2009, Turtle Shell Productions and at the Samuel French Festival. In 2017 Allan’s DARE won the Mario Fratti-Fred Newman Political Play Contest, sponsored by the Castillo Theatre in New York City. In February, his 10-minute play, ...LAST AND ALWAYS, will be produced by The Raven Theatre in Healdsburg, CA as part of their Short Play Festival.  Fifteen plays were selected from more than eight hundred submissions.

Other plays have been produced by Buffalo United Artists; the Valley Repertory Company of Enfield, CT; the Salem Theatre Company in Salem, MA; by Uptown Players in Dallas for the 2011 Dallas Pride Festival; at the Hyde Park Theatre, the Off Center Theatre and Rollins Theatre in Austin for the 2010 Austin Pride Festival; and by the West Coast Players in Clearwater, FL. Allan has had plays produced at Iowa State University; the Registry Theatre in Kitchener, Ontario; Blue Slipper Theatre in Livingston, MT; The Actors Theatre of Santa Cruz, CA; Eclectic Company Theatre in LA; and the University of Guam. His most recent production of his award-winning DARE, was at the Desert Rose Playhouse in Palm Springs to conclude the theatre’s 2017-2018 season. In 2019 Allan’s play, DEX & ABBY, was produced by The Ground Floor Theatre in Austin.

Allan’s plays have been finalists for festivals in Greenville, NC, San Luis Obispo, CA, New York City and for the 2012 National Award for Short Playwriting of the City Theatre of Miami. His play, ESKANDAR, was a finalist for the Arch and Bruce Brown Foundation competition in 2014 and one of three winners of the 2015 Texas Playwrights Festival at Stages Repertory, in Houston.

Daniel Washelesky (Director) is a director, dramaturg, playwright, and the Managing Director of The Passage Theatre, where he served as dramaturg for SPIRITS TO ENFORCE and HAPPY BIRTHDAY MARS ROVER. Born and raised in Chicago, he completed his M.A. in Theatre and Performance Studies at Washington University in St. Louis. With Steppenwolf Theatre, he has assistant directed THE CHILDREN, provided dramaturgical support for THE REMBRANDT and THE DOPPELGÄNGER, and script supervised LINDIWE and a workshop of LA RUTA. Recent directing credits include PETTY (AND I KNOW IT) (Davenport’s Piano Bar), THE DATE (Relationship & Sexual Violence Prevention Center, WU), and ROSENCRANTZ AND GUILDENSTERN ARE DEAD (All Student Theatre, WU). Next Daniel is currently the dramaturg for two plays in Valiant Theatre’s New Works Festival and directing his third cabaret collaboration with James Gavin and Hannah Rosenhain.

Pride Films and Plays changes lives through the generation of diverse new work (or work that is new to Chicago) with LGBTQ+ characters or themes that is essential viewing for all audiences. The company produces a full season of full productions, shoots one short film each year, and continues our famed play developmental projects. PFP is the principal tenant in Pride Arts Center.

Pride Arts Center, in its own right, produces events complementing the PFP vision, including dance, cabaret, film, and more. Events can be one-night or limited run productions or feature national treasures like Charles Busch.  PAC occupies The Broadway at 4139 N. Broadway, which has 85 seats, and The Buena, which has 50 seats at 4147 N Broadway.