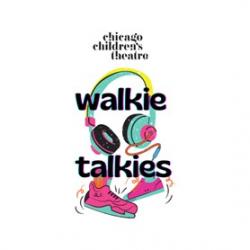 Walkie Talkies are fun, totally original, story-based audio experiences that encourage families to get outside and explore Chicago neighborhoods together.

﻿Not only that, Walkie Talkies are a new way for families to take a walk, release stress and create happy shared family memories until we can be back together at the theater.

Each episode was commissioned by Chicago Children’s Theatre and created by local theater artists. The result is a fun and educational new audio series that children and families can enjoy together, outdoors and safely, even over the winter months, while learning more about the beautiful city they live in.

So lace up your sneakers, pop in your ear buds, and take a walk through some of Chicago’s most distinctive neighborhoods. Each pod is under one hour and comes with a walking map to guide families and field trips on each bite-sized journey, plus resources including photos of top tour highlights, vocabulary keys, recommended reading and song lists, and other fun family activities.

Go to chicagochildrenstheatre.org to download and stream Walkie Talkie episodes directly to your smart device via Spotify, Soundcloud, Pocketcast and soon on Apple iTunes.

Adventure-seeking families should “smash the subscribe button” to be the first to download future Walkie Talkies exploring even more Chicago neighborhoods and attractions.

The Green Heron - or - Should I Be Scared?

Produced and presented by Shawn Pfautsch and Jessica Ridenour

This Walkie Talkie starts on top of the hill behind the North Pond restaurant at the north end of the park near Diversey Street, heading south. From behind the Richard Oglesby Monument, kids and families follow a spunky young Green Heron south along the shores of North Pond, beside the Peggy Notebaert Nature Museum until the story ends at Fullerton Parkway. You’ll meet some of the heron’s animal friends on the way, and learn a little bit about nature here in the

heart of the city too. Just hit the pause button to take a break, look at your map, or wait to watch some Canadian geese to fly by.

Chicago-based artists Shawn Pfautsch and Jessica Ridenour are excited to collaborate at Chicago Children’s Theatre for the first time. Although they’ve been married for five years, The Green Heron is their first play together. You may have seen Pfautsch on stage at The House Theatre, The Hypocrites or in Chicago Children’s Theatre’s productions of A Year With Frog and Toad and Frederick. Parents may have seen Ridenour on stage at Second City or on their televisions on Chicago PD.﻿

Created and narrated by Jasmin Cardenas

Listeners are encouraged to keep count how many decorative monarch butterflies and Mexican flags they see along the way. Stops at neighborhood landmarks like Café Catedral, Our Lady of Guadalupe Shrine, Our Lady of Tepeyac Mural and the Little Village Public Library provide opportunities for Jasmin, Mateo and Catalina to sing traditional songs, tell stories about Mexican mosaics, legends, history and culture, teach some simple Spanish vocabulary, and share how Little Village became such a vibrant and colorful home for Mexican immigrants new to Chicago.

Jasmin Cardenas is an actress, arts activist, professional storyteller and lifelong Chicagoan. Working with children and young people is her passion and using theater to find solutions to real world problems is her joy. Devising plays with brilliant young people across the city gives her hope. She has performed at The National Storytelling Festival in Jonesburough, TN, will be featured in 2021 and has toured across the United States from Portland, Oregon to NYC. As a theater actor and director she has worked with many companies including Steppenwolf, Goodman, Lookingglass, Sojourn, Lifeline, Free Street and Collaboraction. Currently a commissioned playwright by 1st Stage Theater in Virginia she is working on a new solo show about working people. She is the winner of the 2018 Outstanding Storyteller Award from ALTA, the Alliance of Latinx Theater Artists of Chicago. Cardenas is a mom and enjoyed collaborating with her two children, Mateo (8) and Catalina (5) for this project.﻿

While on a walk to cool down from an argument with her mother, Stacey, a young, Black Chicagoan finds herself exploring a neighborhood close to home. She encounters several places from her family's memories like the Jeffery Theater, Woolworth’s, South Shore Beach, and Majani’s Restaurant, and conjures up a few of her own. Take a walk on Stacey's path through Chicago’s South Shore community as she recounts these stories, remembering the past to plant seeds for her future.

Barrett is a Chicago-based theater artist and practitioner, developing programs to amplify teen and community voices and holding space to rehearse, tell, and change the stories of their lives. She is a company member with the ICAH’s For Youth Inquiry, Associate Artist with Pivot Arts, and is the Associate Director of Education at the Goodman Theatre. As a director and performer, she has worked with Chicago companies including Sojourn, The Theatre School at DePaul, Free Street, Pegasus, Court, eta, and Theater Unspeakable. Continuing to build the world she wants to see and live in, Barrett is currently rewriting the Declaration of Independence as a participatory play. ﻿

Walkie Talkies join Chicago Children’s Theatre’s growing roster of free, online theater and storytelling resources designed to keep kids engaged and entertained at home until we can all be together in a theater again.

Examples include the critically acclaimed toy theater video production of Frederick: A Virtual Puppet Performance based on Leo Lionni’s Frederick, read by Michael Shannon, and Doll Face Has a Party!, a romp of a video about a directed by Brian Selznick.

In addition to its new YouTube channel, Chicago Children’s Theatre is offering a robust line-up of virtual Play@Home youth performing arts classes and school’s out day camps this fall.

To learn more and register for classes or camps, visit chicagochildrenstheatre.org.

Chicago Children’s Theatre was founded in 2005 with a big idea: Chicago is the greatest theater city in the world, and it deserves a great children’s theater. Fifteen years later, Chicago Children’s Theatre is the city’s largest professional theater company devoted exclusively to children and young families, with a national reputation for the production of first-rate children’s theater with professional writing, performing, and directorial talent and high-quality design and production expertise.

Inclusion and access are core values at Chicago Children’s Theatre, where every child can have access to the company’s programming regardless of financial position. Thanks in part to the Susan M. Venturi Fund in memory of James and Roslyn Marks, CCT provides scholarships for children and families with demonstrated need. As a result, one in five youth at CCT receive financial assistance annually. Additionally, tens of thousands of free and reduced price tickets are distributed to under-resourced schools each season in partnership with Chicago Public Schools.

Chicago Children’s Theatre won the 2019 National TYA Artistic Innovation Award from Theatre for Young Audiences/USA for its pioneering work creating and presenting live theater experiences that tear down barriers for persons with disabilities. In addition, Chicago Children’s Theatre has garnered six NEA Art Works grants, and in 2017, became the first theater for young audiences in the U.S. to win a National Theatre Award from the American Theatre Wing, creators of the Tony Awards.