The Fire is the first team to score twice in a match against Columbus this season. The Crew, the top team in MLS right now, have only conceded four goals in 11 games.

In the 11th minute, a precise through ball from Alvaro Medran into space found a streaking Berić. The Slovenian striker’s cross to Mihailović led to a left-footed tap-in for his first goal of the season. Three minutes later, Berić netted his team-leading third goal of 2020 off a cross from Fabian Herbers.

In the second half, the Crew would strike twice. A corner kick in the 68th minute found U.S. international Gyasi Zardes whose header was deflected in by midfielder Fatai Alashe. Zardes then scored the equalizer in the 88th minute as the Crew was able to grab a point on the road.

Next on the schedule: Chicago Fire FC will begin the second phase of the continuation of play on the road versus Orlando City SC at Exploria Stadium on Saturday, Sept. 19. The match will begin at 6:30 p.m. CT and will be broadcast live on WGN-TV and ESPN+ and transmitted locally in Spanish on 105.1 WOJO-HD2. The pregame show, presented by CIBC, will begin at 6:15 p.m. CT on ESPN+. Yesterday, the Fire announced a trio of upcoming games. 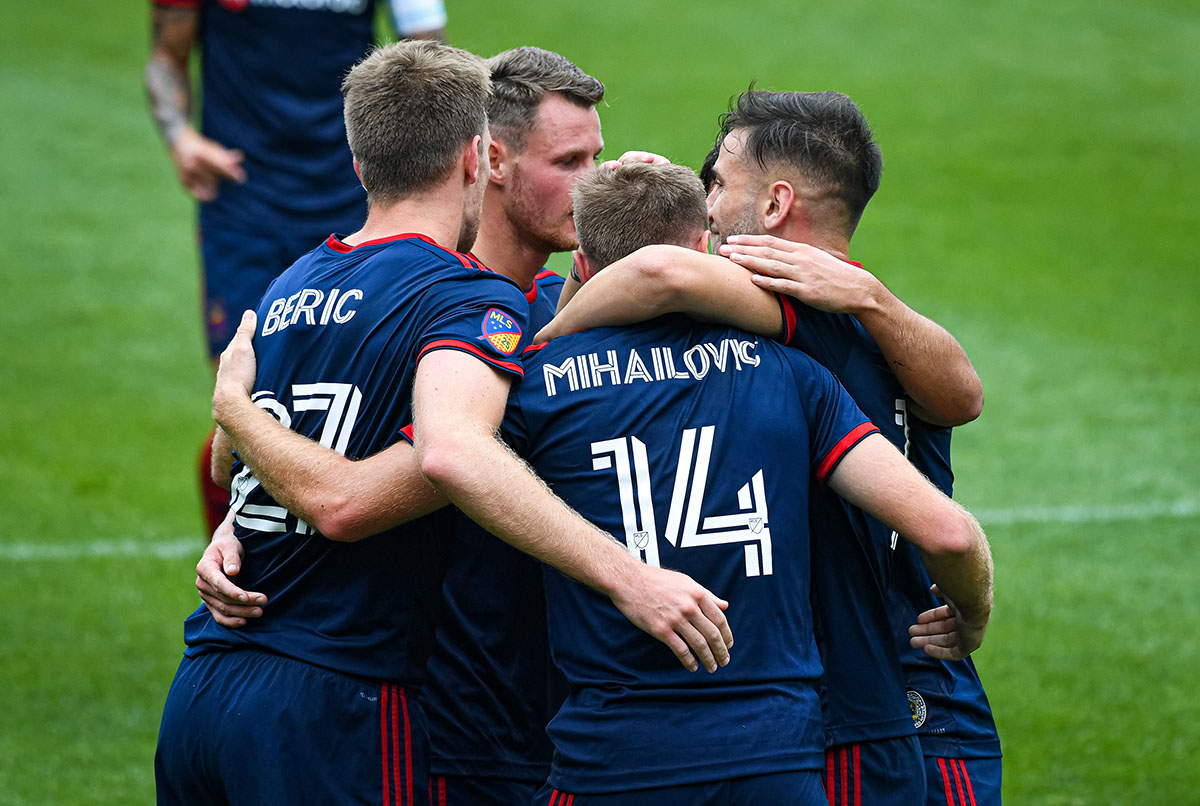 Key attacking plays:
CHI - Fabian Herbers 6th minute (WATCH): Robert Berić collected the ball at midfield and slipped it through the right side to a sprinting Fabian Herbers. The German’s shot went just wide of the far post.

CHI - Elliot Collier 65th minute (WATCH): Collier held the ball on the left side and took a quick shot from close range that forced a reaction save from Columbus goalkeeper Eloy Room.

CHI - Álvaro Medrán 77th minute: A ball in-behind found Medrán 1v1 against Room. The Spaniard attempted to chip the goalkeeper but his touch was too strong and narrowly went over the goal.

Key defensive plays:
CHI - Bobby Shuttleworth 50th minute (WATCH): After a cross was headed up in the air by Zardes, midfielder Luis Diaz took a shot with pace that was saved by Shuttleworth.

CHI - Bobby Shuttleworth 54th minute (WATCH): Shuttleworth made a diving save off a left-footed shot by Zardes.

On the injury status of Djordje Mihailović and his thoughts on the match…
"Djordje (Mihailović), I think, rolled his ankle, so it was an ankle problem. He is, I think, going for a scan so I have no more information right now. Hopefully, nothing serious comes out of the scan. Look, overall it feels like a loss. When you're 2-0 up, and I think even before the 2-0, we had one or two really good chances. We're playing against the leader, a really good team, a made team, a team you always see every week and they know what they're doing and they're very good in the game and you concede in minute 88 after having, again, two or three very big chances, two half-chances or chances, it hurts. It feels like a loss. But again, if you look at it rationally, yes, there are a lot of positives in there. I think, like I always say, we create a lot, the team has a plan and I saw that today. Yeah, it's just, obviously in our situation, you need wins and when you have two minutes before the end, you're still winning and you have such big chances then it doesn't feel good. But overall, it was a good performance, it was a good game, I think, for everyone to watch. As a coach, it feels like a loss."

On creating good luck and earning a point against the league leader…
"Yeah, I don't know if you can believe in luck in football or in sports, I'm not sure about that. No, I would not have signed because I am convinced and I believed and I spoke to the team all week that we can beat them. I don't think it was a 3-0 game in Columbus. They're a really good team, they're a made team, they know what they're doing. But I believe that we can beat them and that's why I wouldn't sign for a draw before the game. How do we turn it around? We turn it around and keep working, keep doing what we believe and that's what we're doing, that's what we're going to do. I'm sure and I believe in this team, I believe in what we do and we will turn this around. I don't know when, but we'll turn this around because every game, there is a lot, a lot of good things. We are a good team, we are playing good football, we're creating a lot. Not sure if it's luck; there's certain situations in life and sport where maybe you have to do more so that it's not luck, but that's just my personal opinion. But we have to keep working; we gotta sleep tonight, tomorrow the guys have off and then we start a new week with positivity. We’ll keep doing what we do and always (try) to get better every single day, fix the little problems we have and keep working and go into the next game."

On what the team needs to do to start finishing its chances…
"Look, I think finishing chances or finishing plays, it's often details, it's often concentration, it's often, is it the last pass, is it the final cross, is it your actual finishing? So it has to do a little bit with everything, there's not one button you can press and then it works. You have to keep working in training, when there is an easy solution always in training, sometimes you look at finishing, there is no pressure, no opponent, you have to be focused and concentrated and try to score all of these chances you have in training. You have to repeat things, you have to believe and stay positive; there's a lot of things, it's not just one button you can press. But we create a lot and we have to keep working in training. I think a positive attitude and belief that you can score and will score is very, very important. so it's a mix of everything."

On the outcome of the match…
“I mean, it’s disappointing. We’re disappointed. We can feel it in the atmosphere of the locker room. We are not happy. I think we had the lead of 2-0, we had the game under control and then I don’t know, we just don’t have this luck or I don’t know what is happening in these last couple of games. We cannot manage to win a game. I think we just need a little push or a little luck, or a little something just to begin winning. To begin coming into positive results. So for sure we are not happy, this is a loss for us. And, yeah, at this moment it’s hard and we have to keep working, keep training and I’m sure it’s going to change. The luck is going to come our way for sure.”

On scoring a goal and getting an assist…
“I mean I am happy, of course, that I scored, for my assist and everything, but I think we played the first half perfectly. Offensively and defensively. We didn’t make (big) mistakes. And then this is still like the second half we come out, we were not our best, I think we have this kind of problem that we cannot keep the concentration on something. I don’t know exactly what to say on that but we have to keep working on that. To be focused on the whole 90 minutes. We cannot draw when we are ahead 2-0, you know? We just have to keep working on our focus, on our concentration.”

On the offensive relationship with his teammates…
"I think we are still a work in progress. We are still not completely on the same page. We still have some situations where we have to do better like in the second half. We had a lot of chances, a lot of half-chances. I think it’s going to come even more with time and every day is better and better and I think it is a work in progress and I am hoping for all the best in the future. But you can see we are coming to the good spots in the game, we have all these chances and then this finishing touch we have to do it better because today we had the opportunity to score more than just two goals."

On the mood of the group and staying positive with the winless streak…
“Yeah, I mean there’s no getting around it. We’re disappointed, obviously. We were up two goals at home, in control of the game and then to give away two goals like that. A bit unlucky, but we’ve got to do better. We’ve got to, at home especially, be able to get in our blocks and see a game like that out and I don’t think there’s a guy on this team that you’re going to talk to that’s not going to say they’re disappointed right now.”

On the two late goals conceded...
“The first goal I know was off a corner, I mean I’d have to watch it back. I can’t say too much right now, you know. It’s an initial header, it seemed like it kind of hit somebody in the face and it’s behind me by the time I can react to it. I mean the second one, he takes a shot that hits someone in the back of the leg and it lays out right in front of Gyasi (Zardes) for a 1v1 so I mean it’s frustrating, it’s extremely frustrating, I think this is a bit of our luck right now that these are the kind of goals that we are conceding where things are not really rolling our way in front of the goal defensively. But that being said, I think there are things that we can improve, absolutely, and we’re going to. It’s not something that we take for granted and I think at training, these are things that we are going over, we’re trying to improve and we’re trying to get better at. I think we are disappointed right now but I think we need to keep a positive attitude and keep trying to improve these things and continue to try to get these results and try to move up in the table.”

On getting a consistent run of games with the starting lineup...
“Yeah it’s been nice. I mean it feels like it’s kind of been a long time coming for me. You know last year I had a tough year. A little bit of injury and some bad luck and I don’t think my confidence has wavered at all. I’ve tried to carry myself as if I’m going to play every game and ready to roll when I get an opportunity and you know that’s why I’m here. I’m here to try to make saves and try to improve the team as much as I can.”