Following New England defender Henry Kessler’s finish in the 11th minute, the Fire responded with more shots (10-2), shots on target (4-1) and possession (62.3%-37.7%) through the opening 45 minutes. With five minutes remaining in the first half, Chicago found the equalizer when Terán produced a thumping header from Giménez’s corner kick (WATCH).

In the 62nd minute, New England regained the lead when a long ball over the top allowed forward Teal Bunbury to bag his third goal of the season. Chicago immediately responded with a goal of its own less than one minute later when forward Chinonso Offor laid the ball off to Giménez, who confidently slotted the equalizer into the bottom corner (WATCH).

With momentum swinging in the Fire’s favor, the home side created back-to-back chances to take the lead late in the second half, courtesy of forward Ignacio Aliseda. In the 78th minute, a goal-line clearance from Kessler prevented Aliseda from scoring his fourth of the season, while New England goalkeeper Matt Turner was called upon to make a strong save on the Argentine’s powerful volley just one minute later.

As the Fire pushed for the game-winning goal, New England managed to find the winner against the run of play when midfielder Carles Gil scored his third of the season in the first minute of second half stoppage time.

NEXT GAME: Chicago Fire FC will continue the Club’s three-game homestand on Sunday, Sept. 26. The Fire will face Nashville SC at 12:00 p.m. CT at Soldier Field. The match will be broadcast live on WGN-TV, CFFC Live and TUDN 1200 AM. 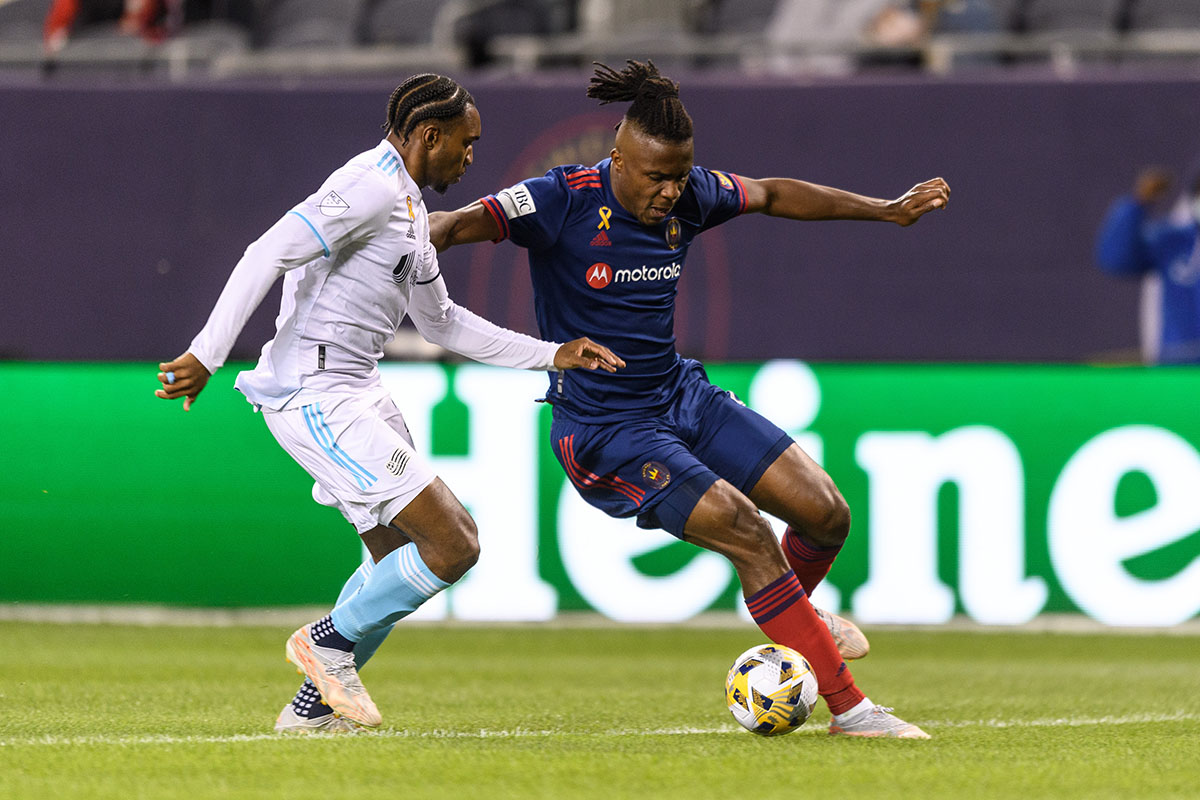 On the decision to start Gastón Giménez after the team violation from last week…
“Yeah because I said they are suspended for one game and once that is done they are back with the team and I treat them like every other player again. That’s it. I am not a coach or a person who if you do something wrong once, I am not going to have that for a week, two or three weeks, or all the time. That’s it.”

On the value of Gabriel Slonina earning the starts…
“I mean these games are very important for him. And again, I think he has done a good game. We will obviously analyze with Adin (Brown), his goalkeeper coach, where he can do better, but these games are so, so important to grow and to learn and to get more experience. And he’s a very young goalkeeper so these games are super important and good for him.”

On his thoughts on the performance of the team…
“Yeah, look that is obviously the frustrating thing, right? And that happened quite often in this time, that we have good games, but today was a good game, I think we did. They are the leader of the whole league and we dominated in possession, in shots on goal, shots in total. I think we had big chances. At the end of the day we will take out the positive of that. I think the way we played, the way we were flexible to then go into a back four diamond was positive. Our team fought, fought hard, but played well, created a lot of chances and in the end of the day it’s these little details that were we to do better, we have the chance to do better. In the last goal, we have two possibilities to make a foul in minute 92 where we need to be smarter. The second goal is obviously very badly defended. And then our chances, we need to finish them better in the final third. These are the little things. But overall again, this performance where there were a lot of positives against a very strong opponent as we know. But yeah, that is what we take from this game but it’s obviously very, very frustrating.

On facing disciplinary action over the weekend…
“I made a small error. It's something that we've spoken about already with the team. I respect the decision that was made and I don't have much more to say."

On playing with urgency…
“For us and for the team, we thought we played a great game on the field. We played really well against the league leaders. We had so many situations where we created goal-scoring opportunities and we weren't able to convert on them, and they didn't create that many opportunities. But as you saw in the last goal that they scored, they had their chances and they converted their chances. So I think we did what we could, we did the best that we could out there to try to win. I think the fans saw it and they identified with us, that we were giving our greatest effort. And now, it's something that happens, and we just have to keep working hard, keep our head up. There's no secret in football besides working hard and continuing to look forward. So we just have to keep our head up and keep going forward.”

On the mood of the team following a home loss…
“When you're losing, it's not easy, right? To have a road trip that long, not get the points that we wanted out of those games, it's definitely disheartening. But I think one of the characteristics of this team that we've shown all along is that we're fighters, we're never gonna give up. You saw a good performance tonight, unlucky on the result, but I thought it showed so much character to come back from both goals. We created a lot of chances there when it's 2-2. Disappointing, the results of late, but you can't fault the effort, you can't fault how this team is still fighting till the very end. I think it's something that we can continue to build on and I'm proud of the guys for that, at least.”

On the lessons Gabriel Slonina can take going forward…
“For him, getting minutes is very important for his development. I think, not only is he getting the games and development, but he's also playing very well. I think you know it's hard anytime you're getting your first games. I think he's also extremely professional on and off the field. I think he's got a huge future in front of him, so I'm excited for him to get these minutes. I think any player gains experience the more games they get. Unfortunately, we couldn't get a win for him this time. Overall, though, he's doing a great job and you've got to applaud his performances.”

On defensive lapses and lack of finishing…
“I think sometimes we have to recover a little bit quicker. Recognize the moments when we got to get back and get a little bit better counter prevention. The other way you can kind of combat that is by finishing our chances. I think we've, in the last games on the road, I think at home right now, we've created quite a few number of opportunities. And I think finishing those definitely is a way that you can put a team away. A little unlucky, them making good saves off the goal line, I think a few tonight, their goalie making good saves. You've gotta hand it to them but at the same time, we have to be killers in front of the goal. And I think that will give us more momentum, give us better chances of winning games. But also, at the back, we have to be tighter, be more compact and be a team that doesn't give a goal so easily.”