Chicago homegrown goalkeeper Gabriel Slonina, 17, made his third consecutive start and fourth appearance of the campaign. The Addison, Ill., native made four saves in the contest to tally his second career shutout, including a big reactionary save on a point-blank header in the 74th minute (WATCH).

Controlling the possession throughout the match (63.2% - 36.8%), the Fire came close to finding the breakthrough goal in the 90th minute when midfielder Gastón Giménez slipped forward Robert Berić in behind on goal. However, goalkeeper Joe Willis came off his line and smothered the Slovenian’s shot on goal (WATCH).

NEXT GAME: The Fire will finish its three-game homestand on Wednesday, Sept. 29 against New York City FC at SeatGeek Stadium at 7:00 p.m. CT (WGN-TV, CFFC Live and TUDN 1200 AM). The match was relocated to SeatGeek Stadium due to a conflict with the Chicago Bears’ schedule at Soldier Field. Following the game against NYCFC, the Fire will play five of its six remaining regular season games on the road. The Club’s regular season home finale will take place on Saturday, Oct. 23 at 7:00 p.m. CT against Real Salt Lake. 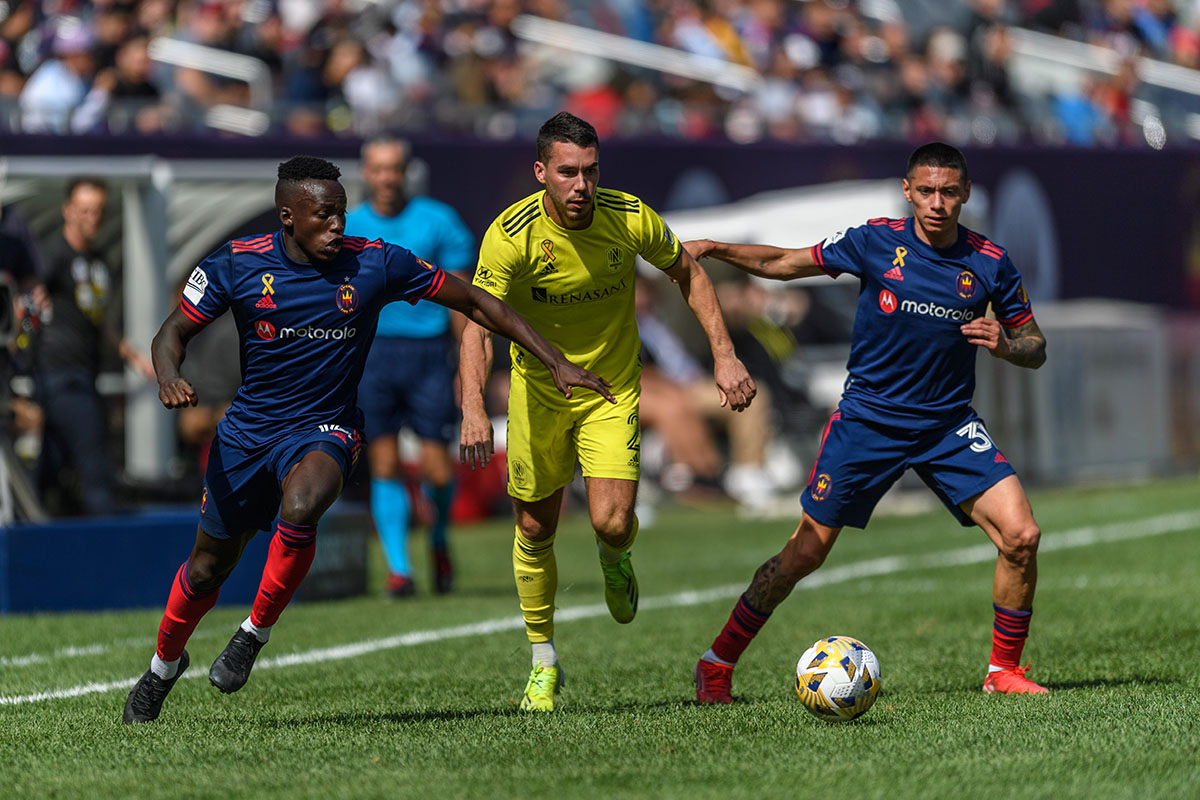 On his overall thoughts on the game…
“Yeah, I think your comments are good. I think it’s a solid point against one of the best teams at the moment in the Eastern Conference, who have a lot of confidence. If you look at their results from the last two months, they are really, really good. So I think it’s a solid point. We didn’t concede many chances. We were defensively solid. We didn’t run into counter attacks. That was all good.

Of course, on the other hand, you wish that you create more, that you could bury one of these little chances, but it was difficult for both teams.”

On the recent play of Gabriel Slonina and the influence of Bobby Shuttleworth for Slonina…
“Yeah, I think Gaga (Gabriel Slonina) has had good games, solid games, very calm games for a very young 17-year-old, let’s call him boy, man. He’s very calm and I think it was good to see today he knows that on the third goal against New England that he can do better. We aren’t only blaming him because we had the chance to make fouls before that. So it was good to see him react, let’s not say a big mistake, but on a goal where he can do better. And I think that is good to see, the mental strength to then go to the next game and being very calm. And today was a difficult game because there is not much to do for a goalkeeper, but you have to be switched on all the time and he did really well in that.

On how Bobby Shuttleworth is handling not starting recently…
“Look, we had a brief conversation and I explained to him my thoughts and that we want to give Gaga (Gabriel Slonina) a few games. And then we also told him it’s not because of a bad performance, he’s had a good year for us and we know what we have with him, but we want to see how the young kid does. He obviously took this well, but of course he probably is not happy. A player who doesn’t play and is happy would be in the wrong place. He’s working, he’s supporting and so far it’s good. But of course, I assume the player himself is not happy, but we had a brief conversation. That’s how we did it.”

On the field at Soldier Field...
“Today was rough. Today was difficult. I think you could see that for both teams that it was very, very difficult to play fast, to play combination football. That’s just the reality. I am not going to sit here and lie. Today was very difficult for both teams to play a good, attractive, offensive-minded football. And I am not saying that every time we had a perfect field we did that and we won, that’s not where I want to go. But obviously today it didn’t help for both teams. In the end of the day, again, we have to deal with it, we have to control what we can control and that’s what we said to the players and I think they tried their best. They tried their best to still try to play, but obviously every time you may play one or two-touch, here you need three or four touches and it slows down everything else for both teams.”

On the paint on the field with the endzones being colored and if it affected the players…
“Look, that is a question you’d have to ask the players. I don’t think I have ever played on a colored field, so I can’t really give you my experienced answer. What I can tell you is the divots, the holes, the bumps, the long grass not wet, that affects the player a lot to play good football. It is what it is. Again, look, we knew it was going to be like that. We have to deal with it and we tried to deal with it.”

On the play of Federico Navarro since joining the team…
“Yeah, he has integrated very well. He’s trying to integrate. Integration is always give and take or give and get something. And he’s doing that. He’s a good kid. He’s a very good kid, very serious and wants to learn. I think he’s had very solid games. He brings what we expect from him, what he knew what he was going to bring to the table, he brings that. That aggressiveness. He recovers a lot of balls. And I think I am happy with that. I think with the ball, he is 20-years-old. With the ball he can progress, he can look more vertical to play. There are a few points which we obviously want to work with him. But so far, I think, so good.”

On the performance of the team…
“Before anything else, it was a good game. I think we controlled a lot of the game. We really deserved to get a little bit more out of that, but we played against a team that really closed themselves off in the back and we really couldn't get into those spaces and get a lot back there. So it was a good, tight game. The field, it wasn't the same as last time, I'm not really sure exactly but maybe it wasn't the same as last time and it may have a little bit of deficit but that doesn't take away from the game at all.”

On the effect of the field conditions…
“I think as far as the field goes, it didn't really affect anything. Anyone who plays football knows that you have to adapt quickly to anything that you're put up against. You have to just adapt and play on any part of the field. I think that we were concentrated from the very first minute, and we really didn't take notice. I don't know if you noticed the bad state of the field, but we didn't really notice anything.”

On measuring up to Nashville SC…
“They're a strong team, they defend really well, they defend do-or-die out there. But I think that we also created a lot of situations out there, we just need to correct a few things and finish some of our chances. I think that they deserve the second place, it's well done, they play very well, but we're up to par with any team that's out there. I think we just have to correct a few errors and keep going out there.”

On adjusting to Major League Soccer…
“I think I'm still adapting, I think I'm going quickly, but I'm doing everything I can so that I can adapt quickly and be better for this team. Really, this team has been great. They have been really helpful to any player who comes to be able to adapt and adjust. What I found here was a very quick game; maybe in Argentina, the game isn't as quick, it's a little bit more settled, but here it's very quick, it's very physical and it's what I expected. So, I'm just doing whatever I can to be able to adapt quickly so that I can keep growing and keep adding to the team.”

On his personal growth as a starter…
“Personally, I take every match like it's a final. I want the team to perform, first and foremost, and then I prepare my game mentally, physically. Every time, I'm trying to have the best performance, so I think personally things are going okay right now. I mean, it's all about the team, and I want to win so I think the team is more important for this part of the season right now.”

On lessons learned as a regular starter in Major League Soccer…
“I think the experience has been amazing and I'm so grateful to be playing and getting there, because experience on the field is so important in a young player's development. And I think you can train as much as you want, but if you don't have that game, realistic-type decision-making and everything, you aren't improving as much as when you're just training. But I think the biggest thing I've learned is that it takes a lot to be on the field as a starter. Mentally, it's a big impact and physically. I think preparing for the game is a huge aspect of performing well.”

On the mentorship of Bobby Shuttleworth…
“Bobby is such a good mentor for me, his discipline and consistency. I just learned so much from him in terms of what it takes to be a professional goalkeeper, because no matter what, he was so consistent and disciplined and getting in the gym and recovering. I think I've learned so much from him and that's part of why I'm performing.”

On the field conditions…
“I don't think it affected the game much because it's [the same] for both sides, you know, everyone's dealing with the same pitch. And I think that they did the best they could and the grass is green anyway, so the green paint is not much of a problem.”