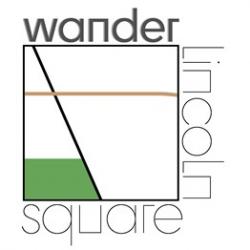 Chicago Immersive, in collaboration with interactive travel agency First Person Travel, is proud to announce the new interactive walking tour WANDER: Lincoln Square—A Chicago Walking Experience, September 19 – November 1, guided tours are given weekly Thursdays through Sundays, in Lincoln Square. This guided tour of the North Side neighborhood includes live agents and prerecorded historical scenes to facilitate exploration of the town’s present with the discovery of its past.

Each showing will include up to 20 socially distanced ticket holders and will last approximately 65 minutes. Tickets are $25 and are available at ChicagoImmersive.com or by calling the Chicago Immersive office, 773.236.2172. Ticket holders will receive information on Wander’s app and where to meet at the beginning of the tour.

“Chicago Immersive is excited to be developing this technology to turn our city into an interactive museum. Cultural tourism shouldn't just exist in the Loop and in buildings. Our hope is that our first outing with Lincoln Square will allow us to start exploring the potential to bring this to other wonderful, historical and fun neighborhoods like Beverly, Ukrainian Village and Bronzeville," Chicago Immersive Artistic Director and Co-Creator Anderson Lawfer said.

"Usually during this time each year, our neighborhood is full of performances, public art, concerts and more. This is why we are so happy to welcome Wander: Lincoln Square to the community, a great way for our neighbors to have an outdoor adventure while staying safe. We can't wait to get our tickets and explore Lincoln Square's past and present on this creative walking tour." added Maggie O'Keefe, president of the Lincoln Square North Neighbors.

Gabe Smedresman, founder of First Person Travel, said, “We’re really excited to be partnering with Chicago Immersive to bring the streets of Lincoln Square to life with immersive audio storytelling."

Participants will be shared information on where to meet for the beginning of each tour. During the tour, participants may select their own path, following guided audio stories led by representatives of the past and/or watching live interactions between civilians from a distance, amplified through the app via microphone and headphones. Therefore, participants will be asked to bring a charged smartphone with internet and GPS location capabilities and their own headphones in order to access the experience.

All participants, staff and agents must be masked and will have their temperature checked at the beginning of each tour. All participants, staff and agents will stand at least six or more feet away from each other at any time they are gathered together. This is an outdoor walking tour, so comfortable shoes and appropriate clothing for being outdoors is recommended. Tours are dependent on the weather and ticket holders will be notified via text if their tour of WANDER: Lincoln Square is canceled due to weather.

NOTE: WANDER: Lincoln Square—A Chicago Walking Experience, was designed with an understanding that the Coronavirus pandemic is an ongoing and fragile situation, sensitive to fluctuating health and safety requirements, precautions and discoveries, therefore all procedures are subject to change at any time.

Chicago Immersive (CI) is a National Immersion Award-winning new company from founders Anderson Lawfer and Nicole Bloomsmith. CI is dedicated to bringing a new style of immersive events to Chicago and the Midwest. Focusing on full immersion and inclusion, it encompasses aspects of escape rooms, cognitive problem solving and theatre to create an epic experience. Last year CI debuted with the hit holiday time-traveling show Grace and The Hanukkah Miracle.

Eli Newell is a Chicago-based creator from St. Paul, Minnesota. He has directed productions at Chicago Shakespeare Theater, Raven Theatre and Strawdog Theatre Company. His newest work as a playwright Cold Town/Hotline premiered at Raven Theatre last fall. Newell has served as an assistant and associate director on

Claire Glubiak is a playwright and arts administrator based in New York City, where she works as an associate producer for En Garde Arts. In September 2018, Northwestern’s regional ImagineU Theater presented an adaptation of Harold and the Purple Crayon that Glubiak co-wrote and produced. Her short play Lament was a finalist for Red Bull Theater's 2017 short play festival. Her play Willing was a semi-finalist for the 2019 National Playwrights Conference and the 2019 Princess Grace Awards Playwriting Fellowship. She holds a BA in theatre and a certificate in integrated marketing communications from Northwestern University.

Jeffrey Levin is a composer, sound designer and musician based in Chicago. Levin has contributed original music and sound designs for over 100 productions for many theaters locally and regionally. He has collaborated with Steppenwolf, Court, Northlight, Victory Gardens, Timeline, Steep, A Red Orchid and many more. Regionally he has worked with Gulfshore Playhouse, Asolo Repertory, Hope Summer Repertory and the Denver Center for Performing Arts. Awards and recognitions include ten Joseph Jefferson Award nominations for Sound Design and Original Music and one win, Edes Award for Emerging Artists. Levin received his Masters of Music from DePaul University and his Bachelor of Arts degree from Columbia College.

Jamal Howard was the associate artistic director at Emerald City Theatre where he directed and choreographed Corduroy, Magic Tree House: Showtime with Shakespeare and The Wiz. Howard is also the co-artistic director of New American Folk Theatre where most recently directed the world premiere of Scraps as well as Dirty Girl and Dark of the Moon.

Anderson Lawfer is co-founder and artist director at Chicago Immersive. Previously, he served as co-artistic director of Strawdog Theatre Company from 2016-2019. He was the artistic director of Hugen Hall from 2012-2016 and focused on new works, adapting and directing Pontypool, Fail/Safe and Kill Shakespeare. He is the creator and host of many late night shows including Theatre Wars!, The Direct Off! and The Game Show Show and Stuff! Lawfer recently directed the Guarino/Langford musical Take Me and the hit Halloween immersive experience Masque Macabre at Strawdog Theatre Company. He is currently directing the Fever international production Mad Hatter's Gin and Tea Party.

Nicole Bloomsmith is co-founder, composer and writer at Chicago Immersive. She recently co-created and performed in their award winning, inaugural production of Grace and The Hanukkah Miracle and is currently playing “March Hare” in Mad Hatter’s Gin & Tea Party with Fever. A singer-songwriter, she released her debut album “Find Me,” which is streamable everywhere.

Chicago Immersive, in collaboration with interactive travel agency First Person Travel, is proud to announce the new interactive walking tour WANDER: Lincoln Square—A Chicago Walking Experience, September 19 – November 1, guided tours are given weekly Thursdays through Sundays, in Lincoln Square. This guided tour of the North Side neighborhoodincludes live agents and prerecorded historical scenes to facilitate exploration of the town’s present with the discovery of its past. Each showing will include up to 20 socially distanced ticket holders and will last approximately 65 minutes. Tickets are $25 and are available at ChicagoImmersive.com or by calling the Chicago Immersive office, 773.236.2172. Ticket holders will receive information on Wander’s app and where to meet at the beginning of the tour.