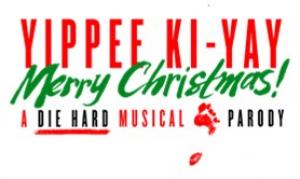 The premiere will be of the most recent staged production which was produced at The Den Theatre’s Mainstage in Wicker Park for the 2018-2019 holiday season. The show was professionally filmed and edited with multiple cameras by cinematographer Sam Donald Bowers (Program Director of The iO Comedy Network, Producer of Lamestream Media on YouTube). As YouTube Premiere viewers will be able to watch the stream live with the cast and interact with them via YouTube’s chat function. The book and score is conceived by Jordan, McCullough, and Gardy with direction by Tiffani Moore Swalley (The Second City).

A hilarious musical parody of the classic Christmas movie Die Hard, and yes Die Hard is a Christmas movie, Yippee invites audiences to the annual Nakatomi Christmas Eve Party on the 30th floor of the Nakatomi Plaza. Grizzled New York cop Bruce McClane is there to rekindle love between his estranged wife and 80s businesswoman Holly Generic. Everything is going swimmingly until fashion obsessed Hans Olo and his group of 12 German terrorists take everyone hostage...everyone except McClane.

“Yippee is our holiday tradition,” states Michael Shepherd Jordan. “Audience members from the first year of production at MCL in 2014 annually reach out to me asking when and where Yippee is going to be performed. We feel so blessed to have the ability to stream the full version of the show online.”

Garday adds, “The production quality of the filming is amazing! Sam and his team really captured the essence of the live performance. What we’re most excited about with this opportunity is for Chicago audience members to share this live performance with friends and family all over the country.”

“I’ve been producing live theatre for many, many years,” chuckles Jensen. “I don’t think any of us imagined we would be in a position where being live on stage in front of an audience wasn’t possible. If I’ve learned anything over the years it’s that theatre evolves, and if streaming is how we can reach our audience this year that’s what we’ll do.”

“I’m most excited by the live interaction with the fans,” says McCullough. “Even though we’re online we’ve never been able to have this type of personal interaction with our audience during the show.”

The show will premiere on the official YouTube channel for the production www.youtube.com/yippeethemusical on Dec. 17 at 7PM CST. It is free to watch. The production team asks viewers to kindly subscribe to the channel, at no cost, so that they can enjoy clips and songs of the production throughout the year. For updates and information follow Yippee Ki-Yay Merry Christmas on Facebook and Instagram @yippeethemusical, as well as www.yippeethemusical.com.

DISCLAIMER: Yippee Ki-Yay Merry Christmas is an unauthorized musical parody and is in no way affiliated with the feature film Die Hard nor Twentieth Century Fox, Gordon Company, Silver Productions, nor any of its distributors.