"A Christmas Story: The Musical" - Review by Carol Moore 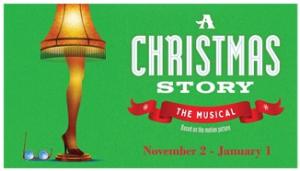 **** Highly Recommended **** Every family has their own holiday traditions.  In my family it was A Christmas Story, my children’s favorite Christmas movie.  No matter how many times I see this nostalgic story, I always laugh!  “You’ll shoot your eye out” has become a family catchphrase.  Over the years it has become one of my favorite plays, although I was never all that fond of the musical.  Marriott Theatre’s production of A Christmas Story: The Musical has changed my mind!  4 BIG Spotlights 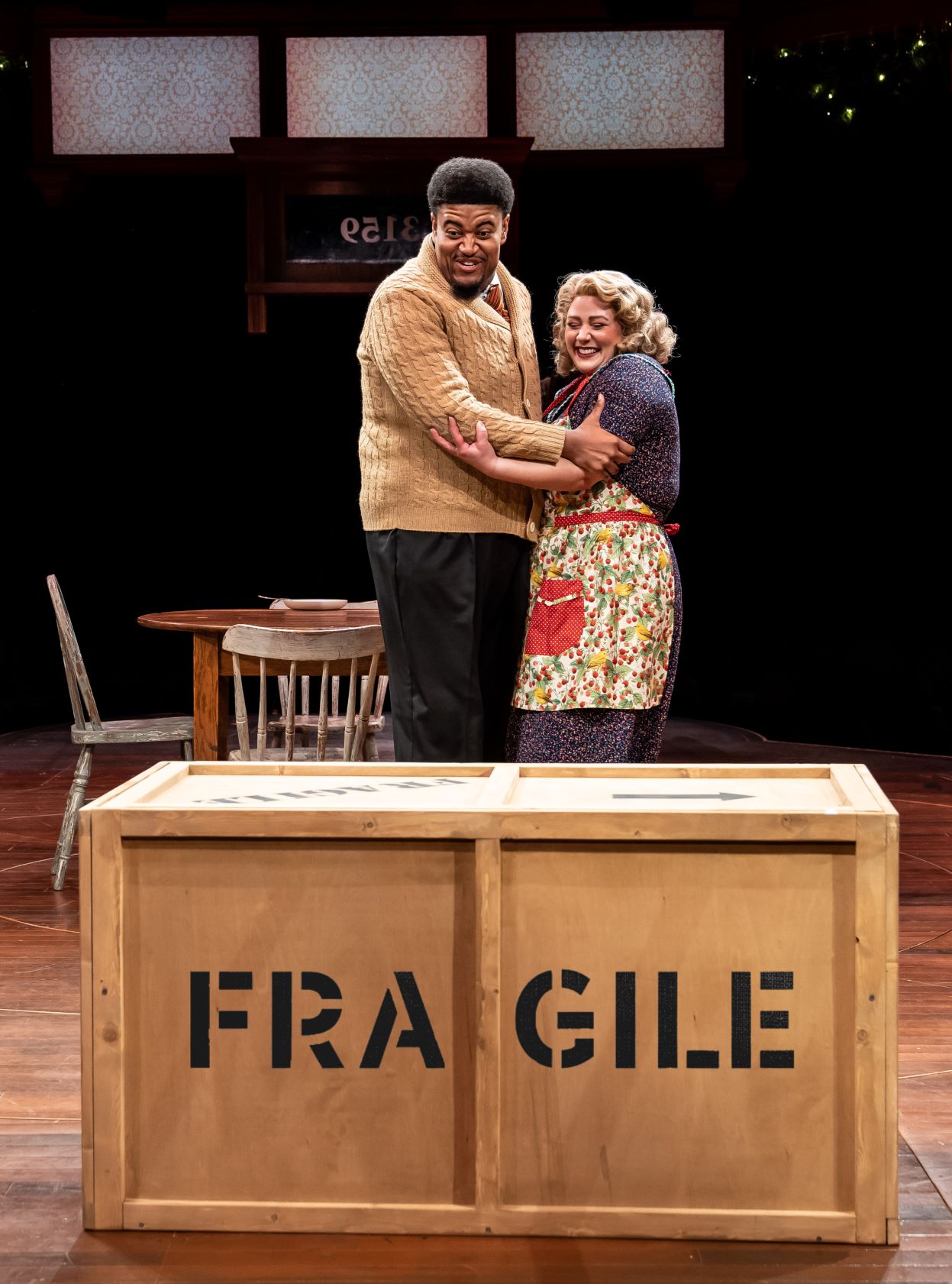 A personal note:  Ralphie’s home town, Hohman, Indiana is actually Hammond.  Playwright Jean Shepherd grew up in the Hessville, my home town.  My Dad, Bill Lannin, lived on Cleveland Street and went to Warren G. Harding School with these guys (Flick and Schwartz were real people – there was even a Farkus in my class).

A Christmas Story: The Musical opens at a radio station as humorist Jean Shepherd (Kevin McKillip) reminisces about a favorite Christmas memory.  Shepherd returns to set add commentary and set up scenes throughout the story. 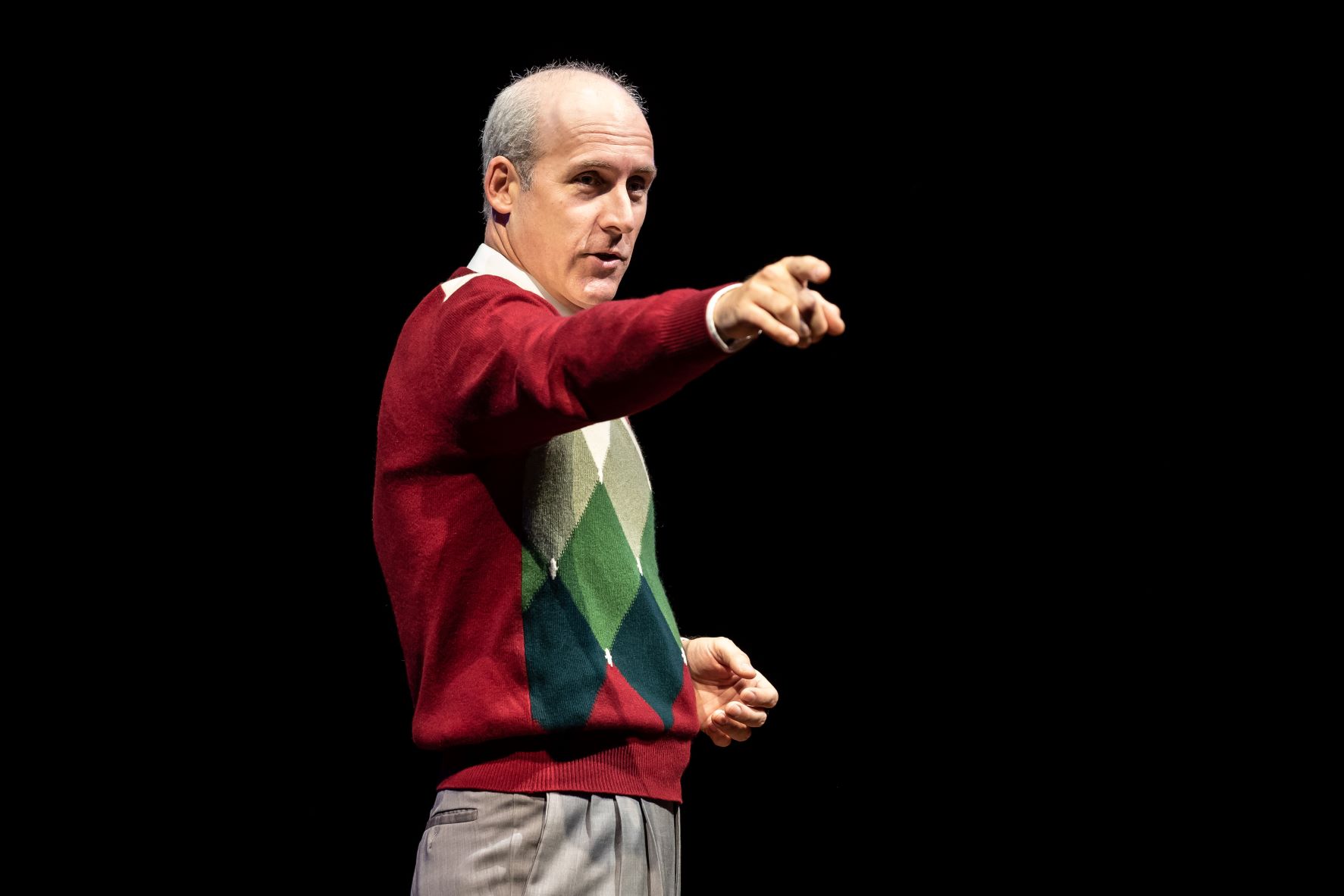 It’s getting close to Christmas, and Ralphie (Kavon Newman at my performance, shared with Keegan Gulledge) is on a mission!  He really, really wants a genuine Red Ryder Carbine Action 200-shot Range Model air rifle, with a compass and this thing that tells time in the stock, for Christmas, he has to figure out the best way to let his parents know what he wants. 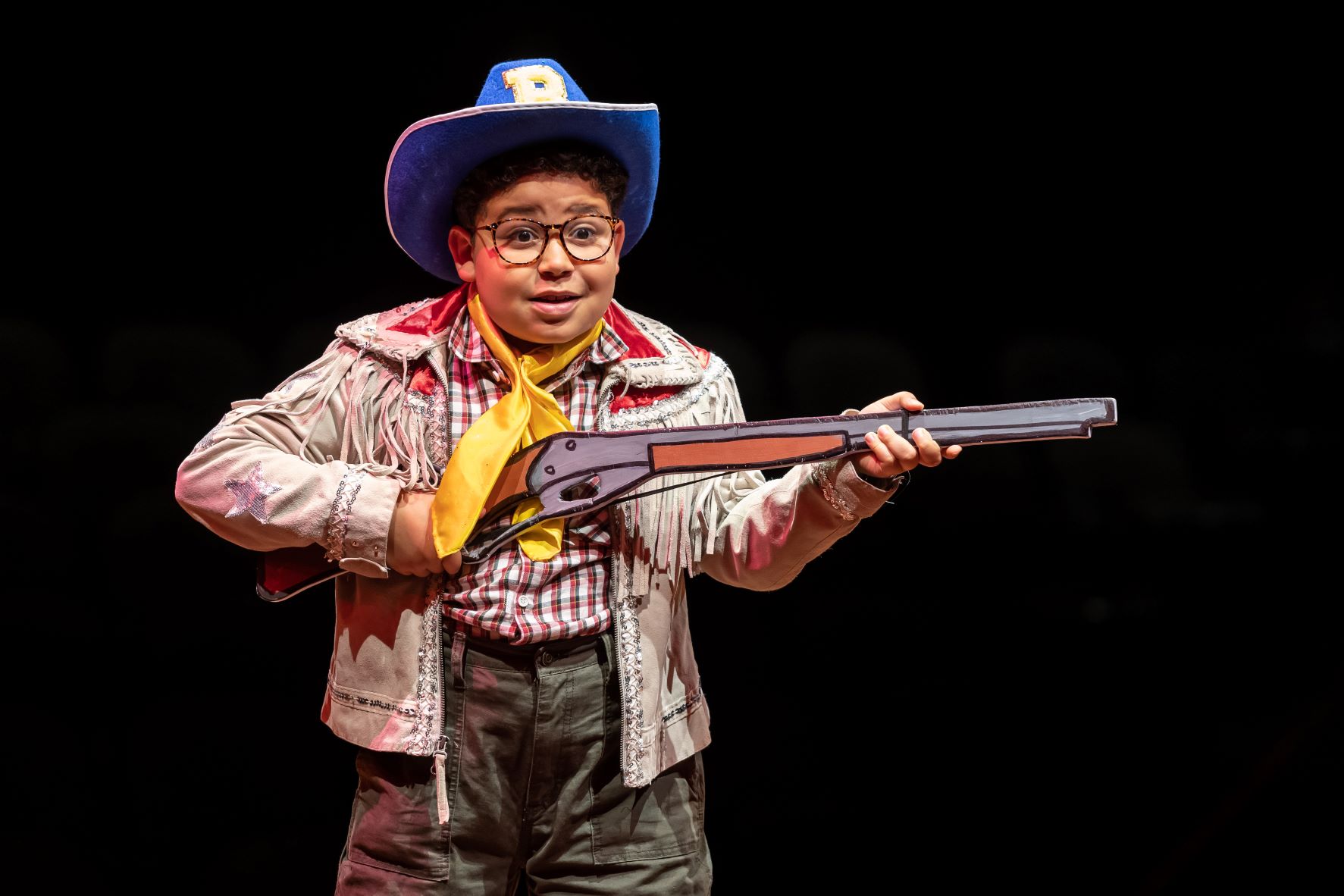 Unfortunately, every adult from Mother (Sara Reinecke) to Miss Shields (Jenna Coker-Jones) to Santa Claus (Jackson Evans) warns him that he’ll shoot his eye out!  By the way, Miss Shields proves she can really belt out a song, when she vamps her way through You’ll Shoot Your Eye Out!

Mother is always there, taking care of the family, deferring to The Old Man (Lorenzo Rush, Jr.), and unflappable in the face of calamity.  The Old Man is larger than life, with his colorful vocabulary – especially when he’s being chase by the Bumpus dogs – or in the cellar dealing with clunkers in the coal-burning furnace. 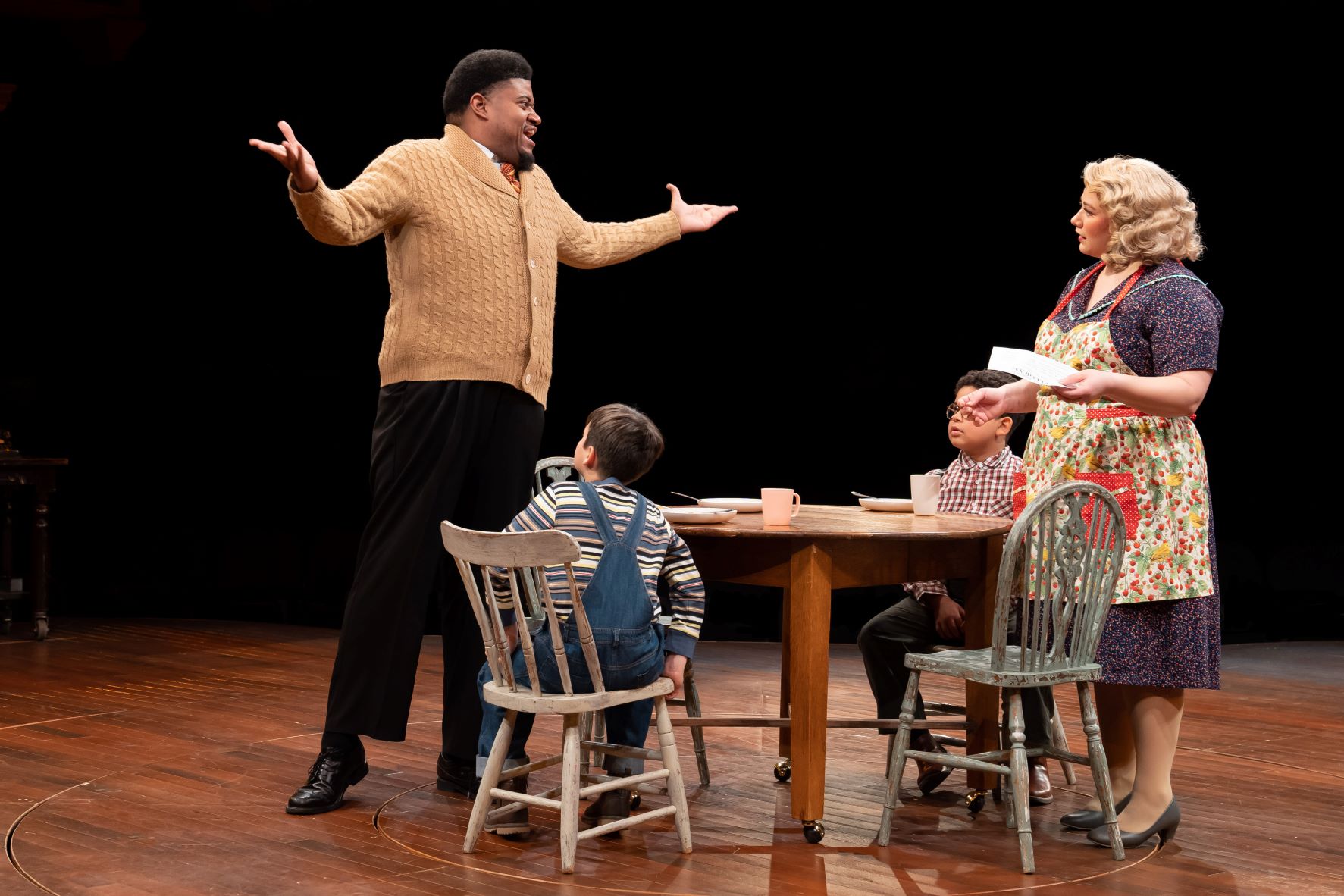 The Old Man loves to enter contests, so when he finally wins a ‘Major Award’, he’s thrilled.  When the award is delivered, in a large wooden crate stamped “fra-gi-li” according to The Old Man, it turns out to be a leg lamp (which has become a treasured Christmas addition to many homes). 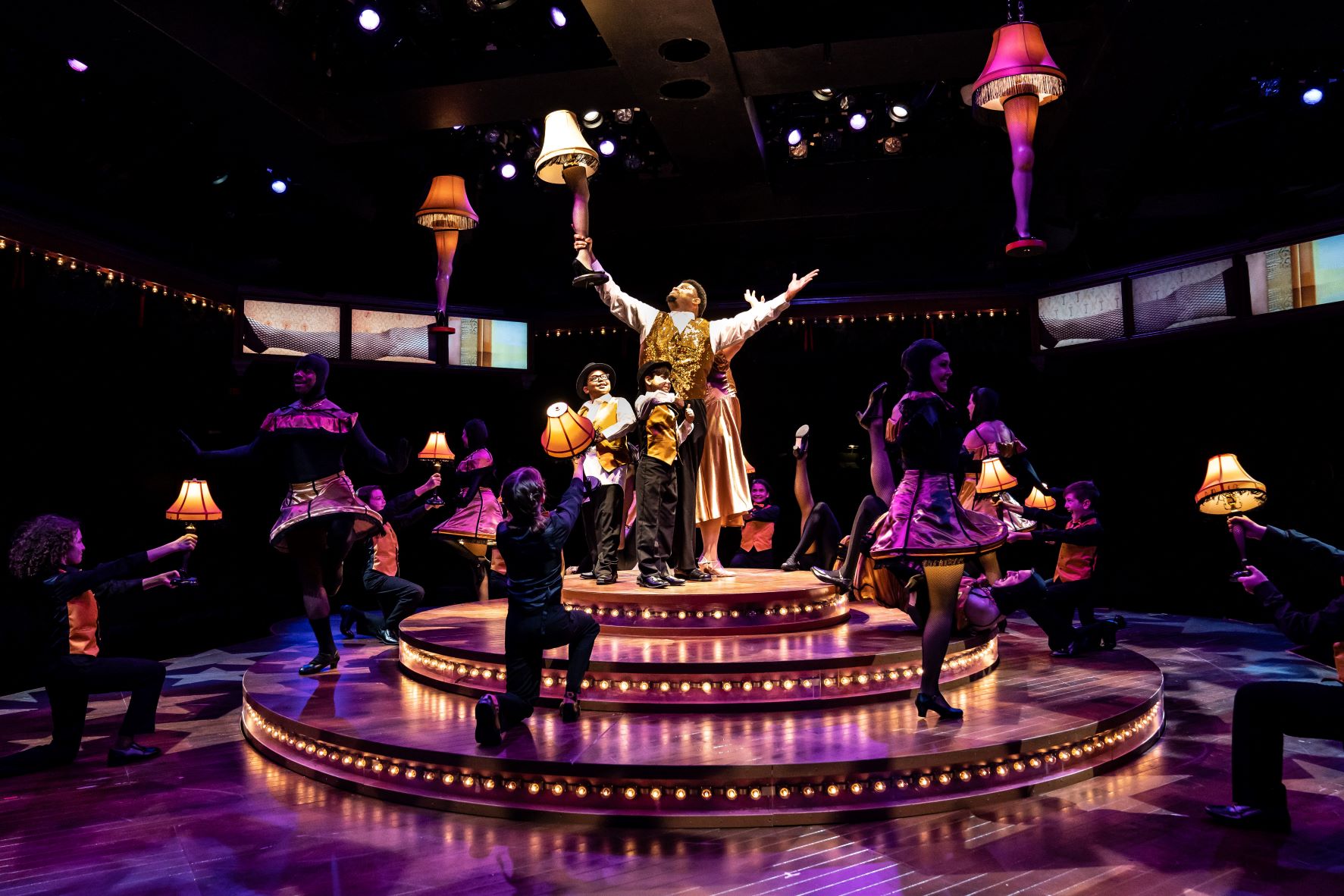 Ralphie doesn’t pay much attention to his younger brother Randy (Levi Merlo or Thomas Murphy Molony).  Randy likes to hide under the kitchen sink.  Mother tries every trick in the book to get him to eat. 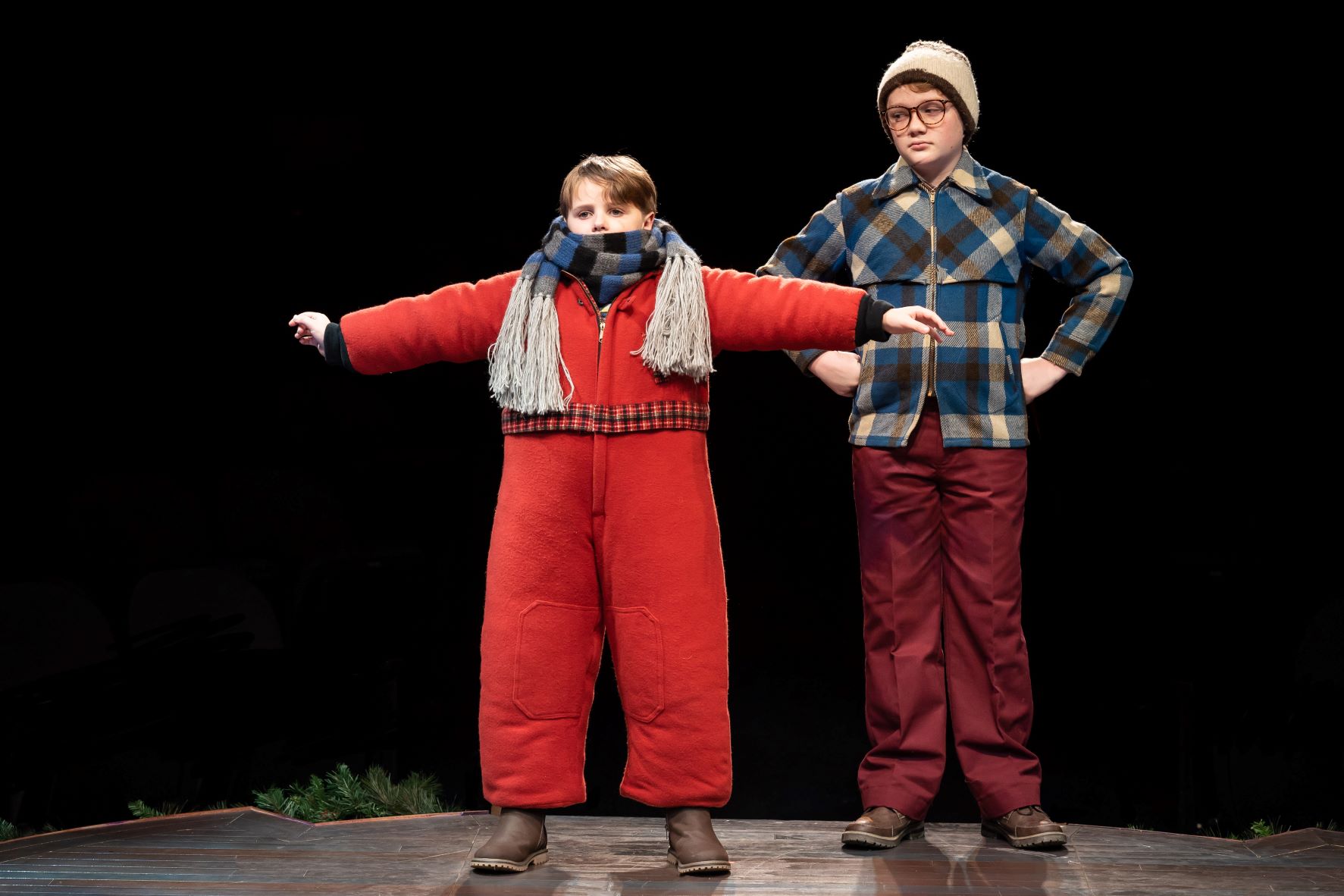 Ralphie and his friends, Schwartz (Jake Maverick Gabor) and Flick (Jaxon Mitchell), like boys everywhere, were always on the alert for the neighborhood bully, Scut Farkas (Braden Crothers), singing When You’re a Wimp.  One day Schwartz “triple-dog-dared” Flick to put his tongue on the flag pole to see if it would stick. 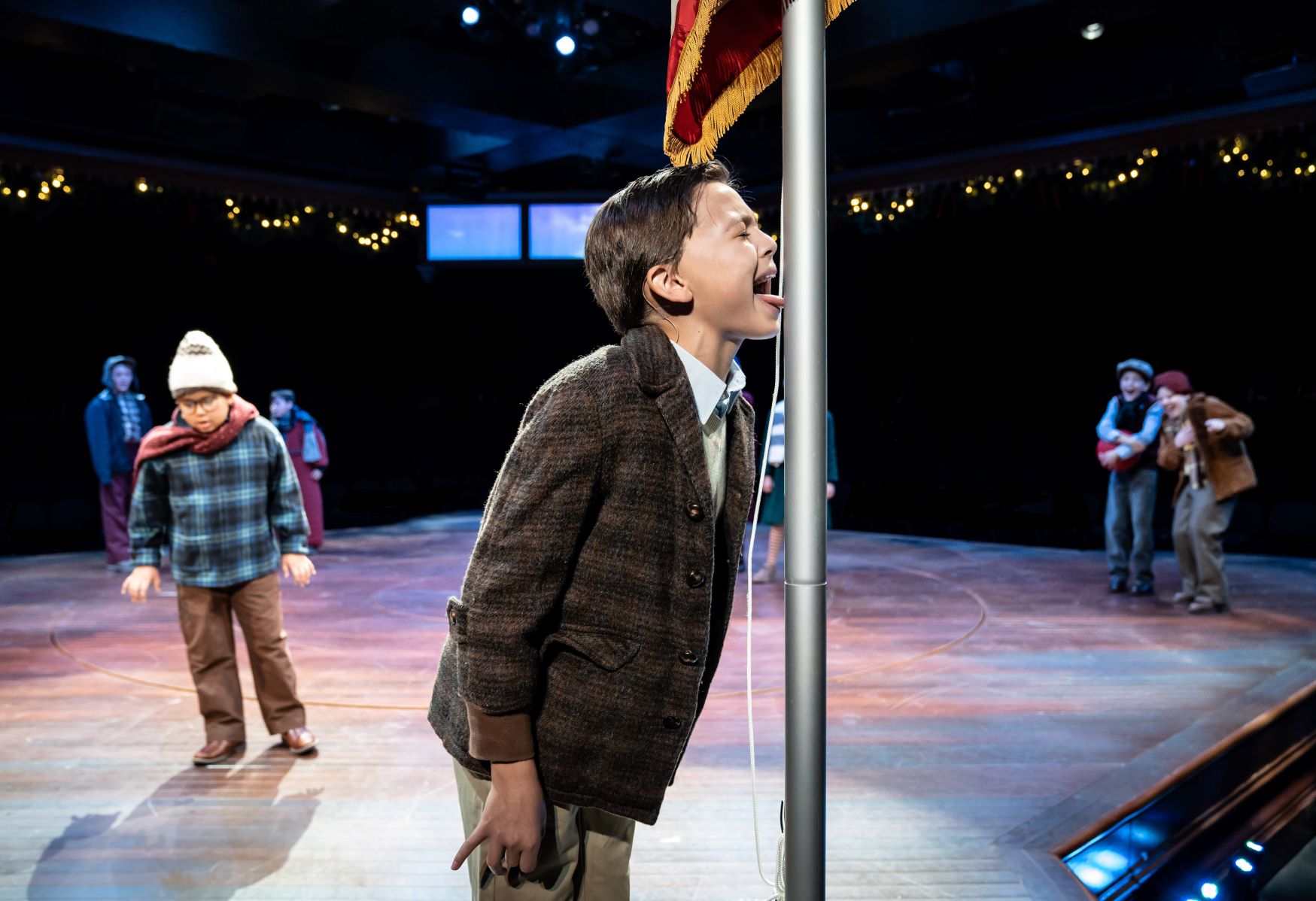 On the way to buy a Christmas tree, the car got a flat tire.  The Old Man, proud of his speedy tire changes told Mother to time him.  Instead, she sent Ralphie out to help.  When he dropped the lug nuts into the snow, he blurted out the word, “the mother of all words” according to Shepherd, the F-word!  Even though he tried to cover it up, his father heard and told his mother who asked where he’d heard that word.  Instead of blaming The Old Man, he blamed Schwartz!  As she thrust a bar of soap in his mouth, Mother was calling Mrs. Schwartz. 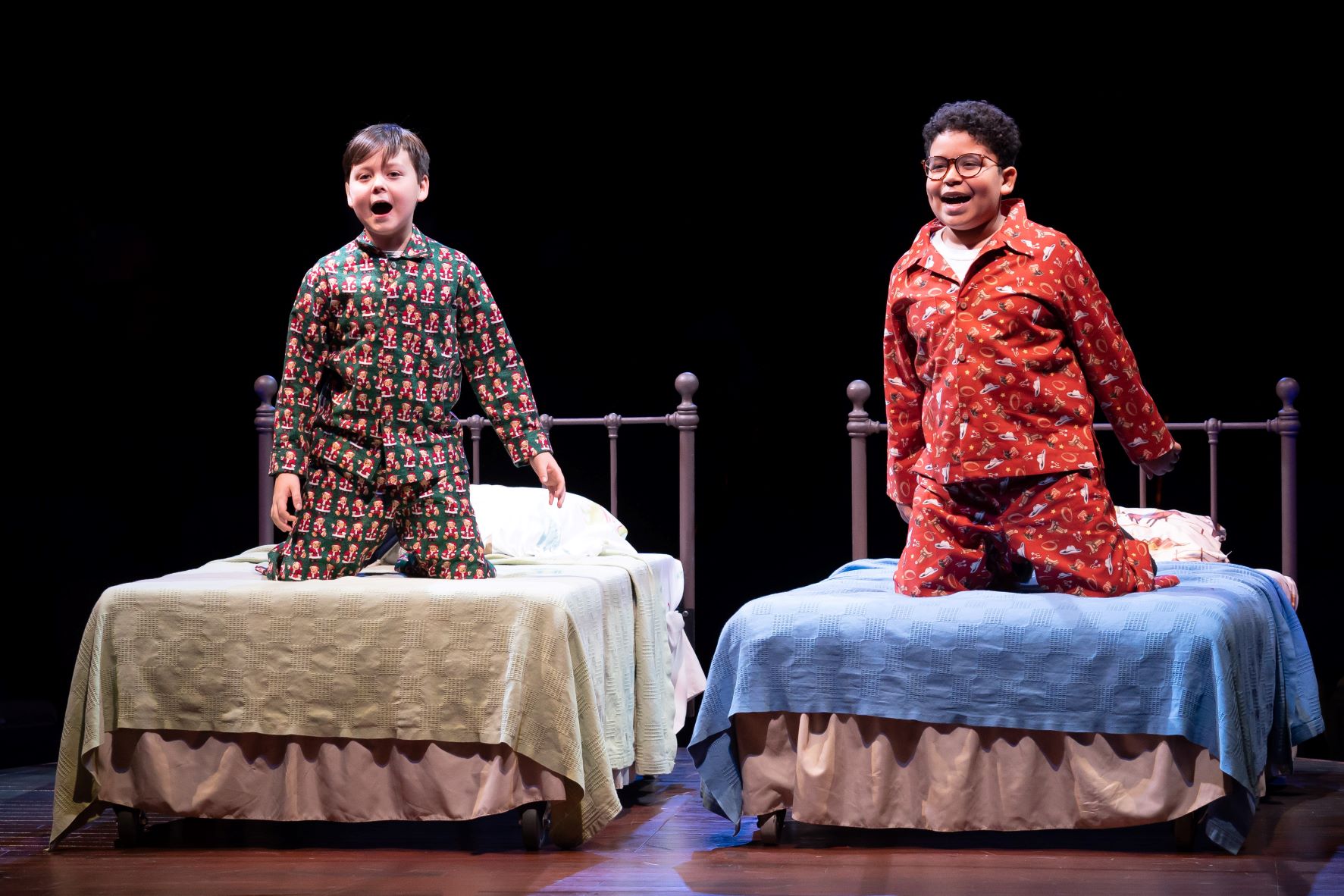 It’s complicated to block a show performed in the round.  Everything happening on stage should be visible from all four sides all the time, otherwise audience members might complain – or quit buying tickets.  The performers must also be aware of that constant need to be facing a different direction.  Kudos to director Scott Weinstein and choreographer Tiffany Krause.  They made it look easy.

Note: Guests are encouraged to wear masks while inside the building.

A Christmas Story: The Musical runs through January 1st at the Marriott Theatre, 10 Marriot Drive, Lincolnshire.  Parking is free; valet parking is also available.  Running time is 2 hours, 30 minutes, with an intermission. 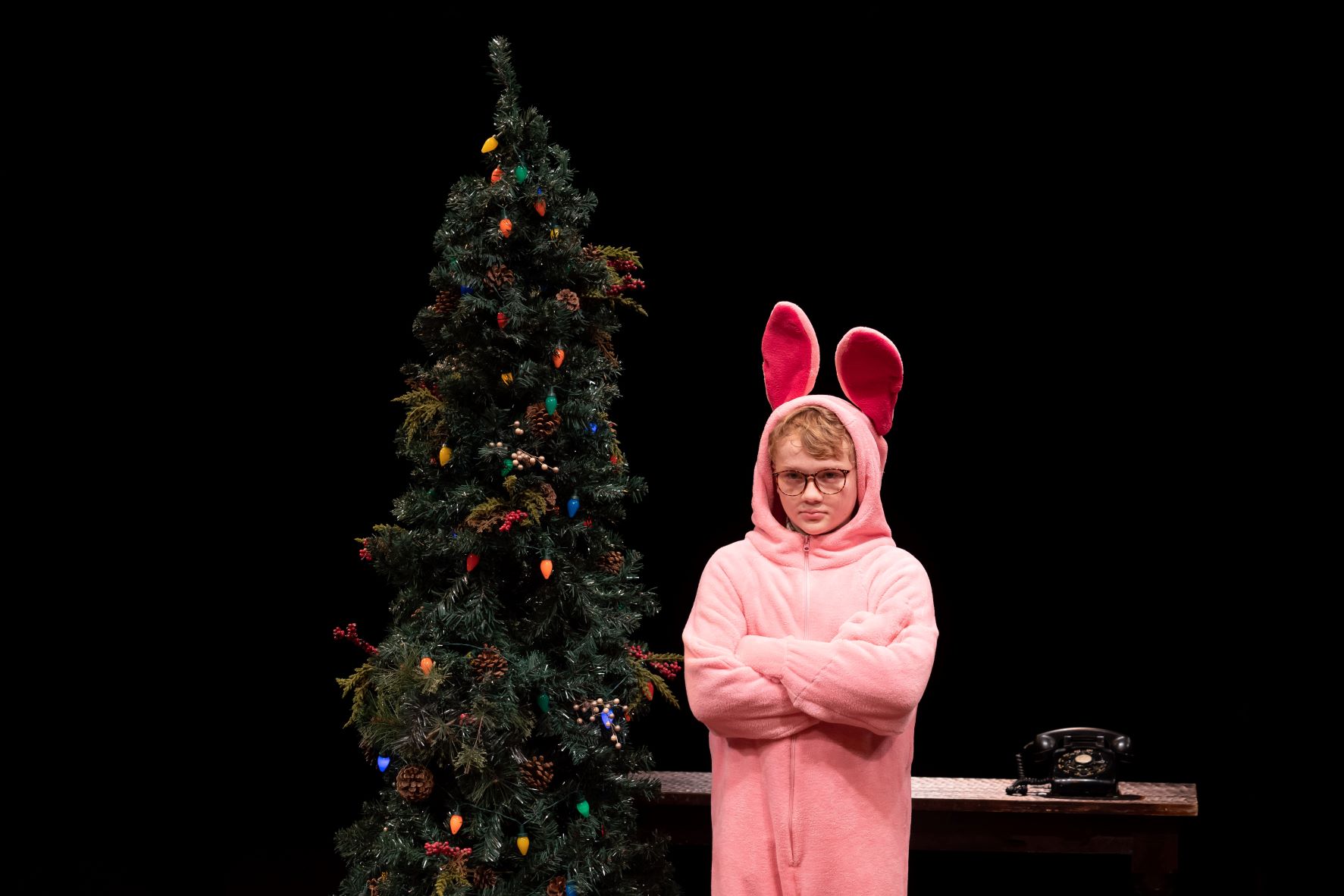