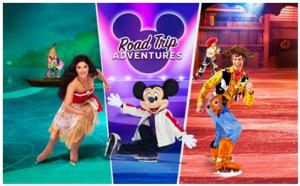 Before the show ever started, a gal named Taylor (Burrell) and a guy named Patrick (Quinn) revved up the crowd by flashing audience close-ups on a giant screen.  Of course, those pictures were available for purchase. 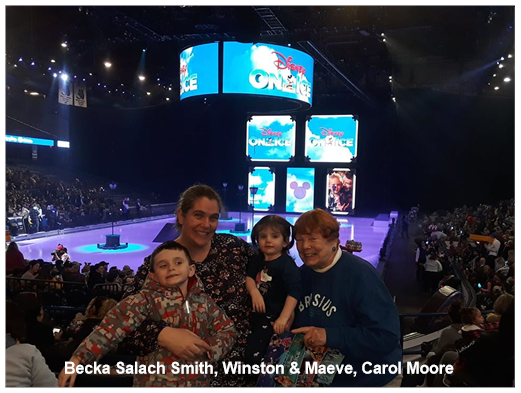 There were lots of new things in this show – aerialists, bicycle stunt riding, tilting lampposts – and they used the aisles and corners of the rink too.

Taylor and Patrick explained that that we’d all be going on a road trip introducing the stars of the show, Mickey and Minnie Mouse, who were greeted with loud cheers, which only got louder when Donald Duck and Goofy joined them.  Mickey, Minnie and the gang got on their special bus to set out on their adventure.

First stop was the rooftops of London where Mary Poppins whizzed around the ice with with Jack and his dancing lamplighters.  A couple of them even rode bicycles up a ramp into flips and spins.

Next stop, the island of Motunui where Moana helped to restore the heart of Te Fiti.  I didn’t know anything about Moana, so Winston filled me in!  Staying in sunny climes, the next adventure was a safari in Africa.  Animals galore joined Simba, Timon and Pumbaa. 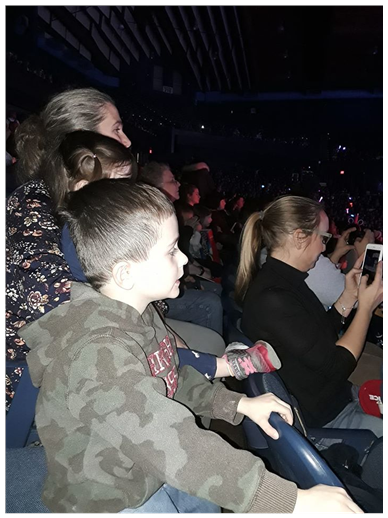 Aladdin was on skates while the Genie was a projection on a huge screen in the center of the ice.  As Aladdin skated with Jasmine, she flew up on a trapeze, doing aerial stunts above the ice to a new song, “Speechless”.

We traveled way, way far away to the “Frozen” north.  Anna and Kristoff were surrounded by green leaves and flowers until they went even further north where they met up with Elsa and Olaf.  While Elsa skated, she was surrounded by Snowflakes.  There were even aerial Snowflakes!

Winston’s absolute favorite part of the show was the appearance of Buzz Lightyear, along with Woody and Bo Peep, in a carnival setting.  As they looked for their new friend Forky, the kids were pointing him out wherever he hid.

There was even an appearance by the entire Incredibles family!

Disney On Ice presents Road Trip Adventures will run through February 2nd at the United Center (Chicago), then the show will move to the Allstate Arena (Rosemont) on  February 6th through 9th.  Parking is free with ticket purchase in all official Allstate Arena and United Center parking lots.  Running time is two hours with an intermission.  Tickets start at $15.  FYI (800) 745-3000 or www.ticketmaster.com