Frank Ferrante's An Evening With Groucho Returns to Chicago 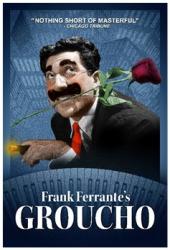 Actor/director Frank Ferrante returns to his internationally heralded stage performance for one night only in AN EVENING WITH GROUCHO on Tuesday, October 26 at the Spiegeltent ZaZou, located on the 14th floor of the Cambria Hotel Chicago Loop (32 W. Randolph Street). Ferrante, who currently plays the comic host “Caesar” in the cirque extravaganza TEATRO ZINZANNI at the same venue, was deemed “nothing short of masterful” by the Chicago Tribune for his role as the legendary comedian, Groucho Marx. 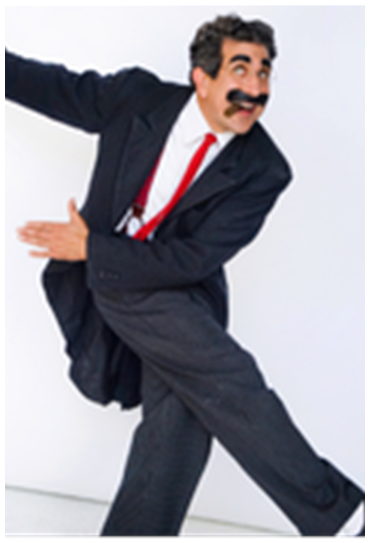 AN EVENING WITH GROUCHO is a laugh-filled theatrical portrait of “America’s most gifted funny man” (The New York Times). Written and performed by Ferrante, the two-act comedy with music celebrates the style and spirit of comedian, Groucho Marx (1890-1977) whose irreverent humor continues to influence artists. Born the middle son of Jewish immigrants, Groucho Marx never made it past sixth grade, yet for 72 years he exhilarated audiences in every medium – stage, radio, film, books and television.

‘GROUCHO’ revels in the legend's prime complete with greasepaint, keen wit and unbridled comic physicality. The show is equal parts biography, music, pop culture history and stand-up comedy and the result is a riotous romp. ‘Groucho’ sings (“Hooray for Captain Spaulding,” “Lydia The Tattooed Lady,” Gilbert & Sullivan’s “Willow, Tit-Willow,” etc.), dances and relates stories of his brothers, Harpo and Chico and friends, Charlie Chaplin, W.C. Fields and poet T.S. Eliot. What sets ‘GROUCHO’ apart from any other theater piece is the sheer amount of improvisation. Ferrante as Groucho Marx liberally ad-libs throughout, wending his way through the theater and making his audience part of the show. Written and performed by Ferrante and directed by independent filmmaker Dreya Weber, the production was recently filmed at the two-time Tony Award-winning Cincinnati Playhouse in the Park and will be broadcast nationally on PBS in spring of 2022.

About:
Frank Ferrante’s GROUCHO
Frank Ferrante was discovered by Groucho’s son, playwright Arthur Marx, who cast Ferrante when he was 22 to portray the elder Marx from age 15 to 85 in the New York and London premieres of Arthur’s own Groucho: A Life in Revue. The show played Off-Broadway at the Lucille Lortel Theatre during the 1986-87 theatrical season for 254 performances. Frank is the owner of Groucho Marx Productions, Inc. 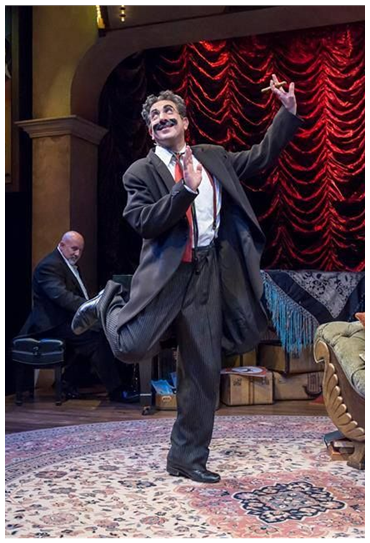 Frank Ferrante (Playwright/Actor) was chosen as a 2019 top ten stage performance by the Chicago Tribune for his role as the outrageous host ‘Caesar’ in the cirque show Teatro ZinZanni. In 2017, The Wall Street Journal picked him as a top ten nationally for his role as Pseudolus in the Stephen Sondheim musical A Funny Thing Happened on the Way to the Forum. As a stage director, he helmed the premiere of the Pulitzer Prize finalist Old Wicked Songs. On television, he played a talking mime on the Emmy Award-winning Childrens Hospital and can be heard voicing characters on SpongeBob SquarePants and Garfield.

Dreya Weber (Film & Stage Director) is a theater director and independent filmmaker honored with 48 national and international film festival awards for her work on The Gymnast and A Marine Story. She is considered the premiere aerial choreographer having created touring concert aerials for Cher, Madonna, Britney Spears and most notably, Pink whose performance of Weber’s choreography in Glitter in the Air was the highlight of the 2010 Grammy Awards.

Gerald Sternbach (Music Director/Accompanist) is a composer who has worked with most of New York’s top Broadway and cabaret talents. He accompanied Mel Brooks on the comedian’s HBO special and Carrie Fisher in her one-person Wishful Drinking.

Responses from Groucho’s Intimates:
”Nobody does Groucho better than Frank Ferrante."
– Arthur Marx, Groucho's son
"Frank doesn't just do Groucho... he is Groucho."
– Miriam Marx Allen, Groucho's daughter
"Frank is the only actor aside from Groucho who delivered my lines as they were intended.”
– Morrie Ryskind, Writer of the Marx Brothers' hits Animal Crackers and A Night at the Opera