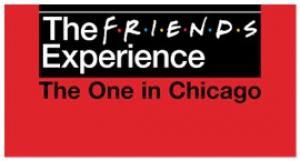 After going “on a break” to comply with COVID-19 city mandates, the wildly popular Friends Experience is scheduled to re-open in Chicago on Wednesday, March 17. Created by Superfly X, Warner Bros. Consumer Products and Warner Bros. Television Group, fans can once again explore FRIENDS like never before with set re-creations, original props and costumes, photo ops and more. Tickets go on sale Friday, February 12, at 12 p.m. CST exclusively at www.FriendstheExperience.com/Chicago. 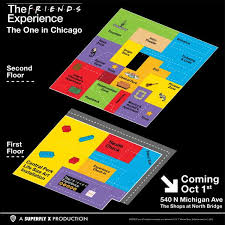 “The One in Chicago” is located at The Shops at North Bridge on the Magnificent Mile at 540 N. Michigan Ave. (the corner of N. Michigan Ave. and E. Ohio St.). The interactive, two-story experience features 12 nostalgia-packed rooms and activations including Monica’s kitchen and balcony and the iconic Friends fountain. The space provides opportunities to explore the show’s history and re-create some favorite moments including peaking around Rachel and Monica’s purple door, relaxing in Chandler and Joey’s recliner, or helping Ross with the infamous sofa pivot. And of course, the space features a re-created Central Perk with the legendary orange couch where fans can be like Phoebe and serenade their friends with “Smelly Cat.”  The experience also includes a Friends retail store featuring several exclusive products that is also open to non-ticketed guests.

The Friends Experience: The One in Chicago originally opened October 1, 2020, before temporarily closing in mid-November. The experience will re-open March 17 and run through May 31. Hours are posted on the website at www.FriendsTheExperience.com/Chicago. Guests can reserve a timed entry to visit with a ticket priced at $35.00 plus taxes and fees. Private access tickets are also available for groups of six or 10 guests. These tickets allow fans to visit the space in the morning before general ticketholders arrive as well as ensure maximum social distancing between groups for a more private experience. 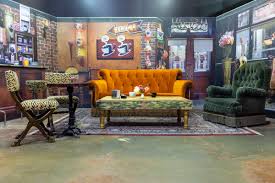 The Friends Experience remains “Monica Clean” and is taking measures throughout the space to ensure a safe environment for its staff and guests. Accredited as a STARä facility by the Global Biorisk Advisory Council (GBAC), safety protocols and procedures at the Experience include but are not limited to social distancing, requiring masks, non-invasive temperature checks and thorough cleaning and sanitization measures. Learn more about the enhanced cleaning and safety protocols at www.FriendsTheExperience.com/Chicago.

“Our team has created the ultimate celebration of Friends in an environment that is both safe and fun,” said Jonathan Mayers, Founder and CEO of Superfly X. “We’re looking forward to welcoming fans back this spring.”

Superfly X is the global themed entertainment division of Superfly. Founded in 2020, Superfly X is transforming the way fans interact with their favorite entertainment properties with The FRIENDS Experience. Superfly X is building on its expertise in creating iconic live experiences like Bonnaroo Music & Arts Festival, Outside Lands and Clusterfest as well as for some of the most recognized brands in the world.  Superfly is headquartered in New York.

Warner Bros./WarnerMedia Consumer Products, a WarnerMedia Company, extends the Studio’s powerful portfolio of entertainment brands and franchises into the lives of fans around the world.  WBCP partners with best-in-class licensees globally on an award-winning range of toys, fashion, home décor, and publishing inspired by franchises and properties such as DC, Wizarding World, Looney Tunes, Hanna-Barbera, HBO, Cartoon Network and Adult Swim. The division’s successful global themed entertainment business includes groundbreaking experiences such as The Wizarding World of Harry Potter and Warner Bros. World Abu Dhabi. With innovative global licensing and merchandising programs, retail initiatives, promotional partnerships and themed experiences, WBCP is one of the leading licensing and retail merchandising organizations in the world.

Celebrating the 25th anniversary of its debut in 1994, Friends remains one of television’s most beloved series. One of the highest-rated shows on television in its original network run, the series still remains a perennial go-to in syndication and on streaming services, where it continues to be a smash hit worldwide. A favorite among critics and fans alike throughout its 10-season run, Friends not only won the Emmy® for Outstanding Comedy series, but also garnered Emmy® Awards for series stars Jennifer Aniston and Lisa Kudrow. From Warner Bros. Television, Friends follows the lives and loves of a close-knit group of friends living in New York City: siblings Ross (David Schwimmer) and Monica Geller (Courteney Cox), along with friends Chandler Bing (Matthew Perry), Phoebe Buffay (Lisa Kudrow), Joey Tribbiani (Matt LeBlanc) and Rachel Green (Jennifer Aniston). Friends was created by David Crane and Marta Kauffman, who executive produced the series with Kevin Bright through Bright/Kauffman/Crane Productions in association with Warner Bros. Television.