Get in the Holiday Spirit with "It's a Wonderful Life: Live in Chicago" - Review by Carol Moore 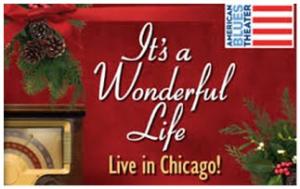 Before the show, as the audience is being seated in Stage 773’s festively decorated Pro (Proscenium) Theatre, Musical Director/Piano Player/ Announcer, 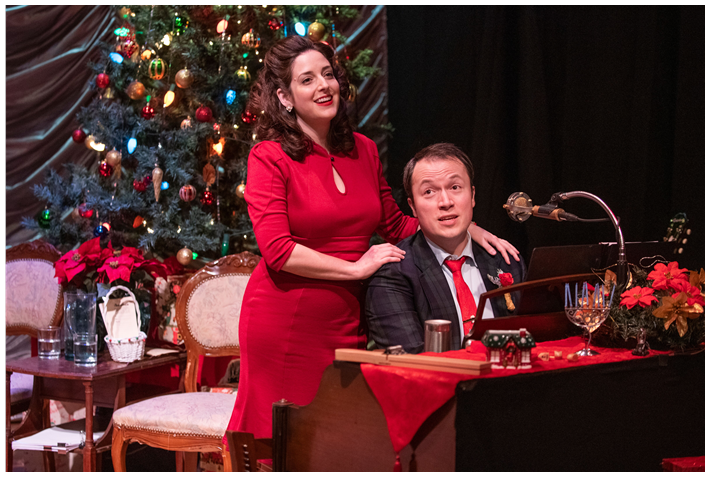 Michael Mahler, plays cheerful holiday tunes.  Mahler and his real-life wife, Dara Cameron, sing a couple of carols too.  Meanwhile, members of the cast circulate through the audience offering people the chance to write an ‘audiogram’ to be read on the air.

About ten minutes before show time, Mahler preps the audience for the broadcast.  He explains that before Frank Capra ever made his movie, George Bailey’s story was a hit on radio which ABT is re-creating today.  Mahler went on to explain how the ON AIR and APPLAUSE signs to the audience.  The he asked where people were from.  I heard people mention Milwaukee, Boston, New York City, Pittsburgh and Los Angeles, as well as Ohio, Florida, Maine and Switzerland!

A little closer to show time, Mahler encouraged everyone to join in singing holiday songs like “Jingle Bells” and “Frosty the Snowman” while on the screen, a handy little ball bounces over the words.  He even does a little ‘name the tune’ contest, playing the intro to 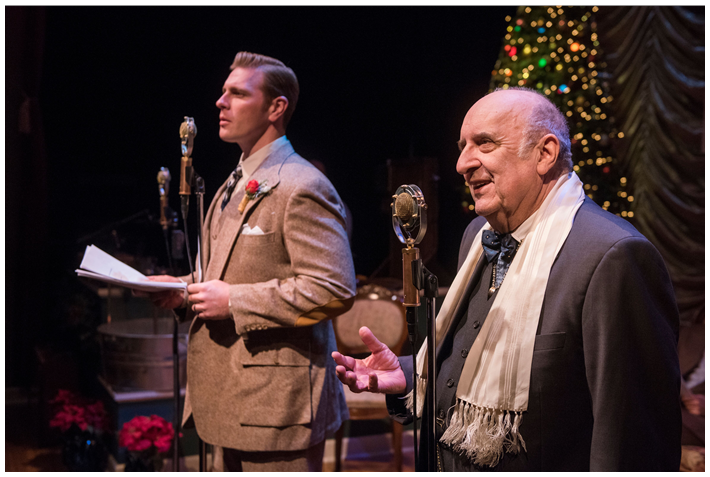 Since the country was still at war in 1943, the “Soldier Spotlight” honors a serviceman or servicewoman.  At the performance I attended, they chose a woman who had served in Iraq and Afghanistan.  Finally, after a five second count-down, the ON AIR sign lit up, the cast moved to the microphones and the broadcast began.

By slightly changing their voices/inflections/accents, everyone in the cast plays at least two parts.  Off to the side, Foley (Shawn J. Goudie) provides the sound effects.  I know I don’t need to recap the story except to say it’s 1944 and this broadcast is originating from the WABT Studio on Belmont Avenue in Chicago.

The actors and their parts:

An additional treat, the cast members serve milk and cookies in the lobby after the show. 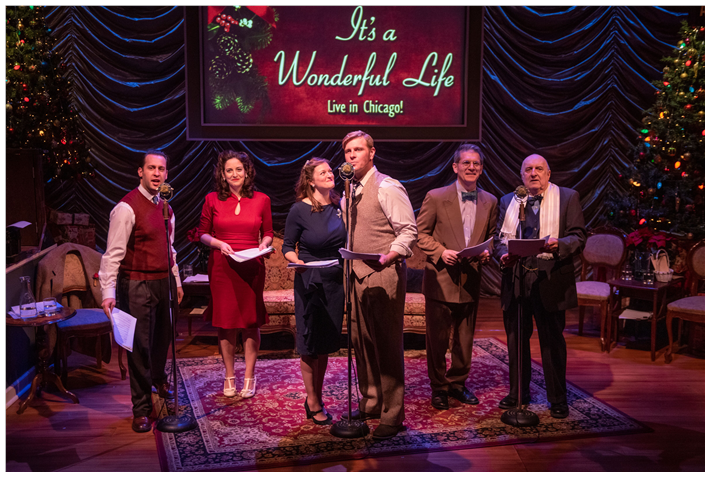 “It’s a Wonderful Life: Live in Chicago!” runs through January 4th at Stage 773, 1225 W. Belmont Avenue, Chicago.  Valet parking is available for most performances.  Running time is 90 minutes, no intermission.

Plan on arriving at least 10 minutes early for carols, prizes and audiograms.  Children 12 and under receive keepsakes on December 21st (Santa visits) and December 28th (Hanukkah).  Tickets range from $19-$69.  FYI (773) 327-5252 or www.americanbluestheater.com.