In response to the COVID-19 pandemic, Hell in a Handbag Productions is kicking-off summer with its very first digital online production: THE GOLDEN GIRLS: The Lost Episodes, Vol. 4 – LOCKDOWN!, written by Artistic Director David Cerda and directed by Spenser Davis. The geriatric Fab Four and their whacky friends and relatives return for this world premiere episode set to stream from June 25 – August 15, 2020. Tickets ($20) are currently available at stage773.com and handbagproductions.org. Patrons will receive a link and password to view the performance via Vimeo at any time through August. 15. 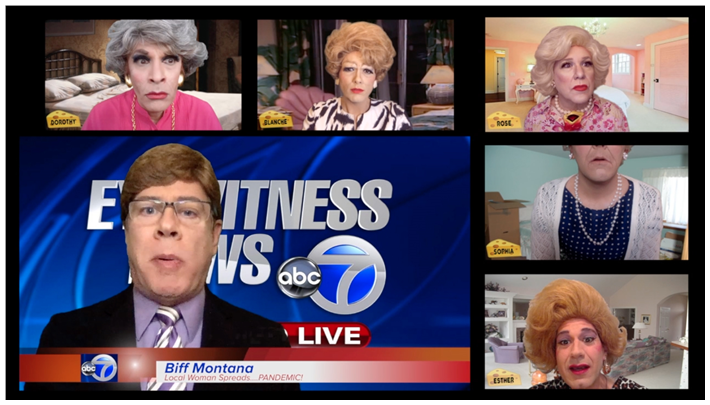 Blanche returns from SantaCom with souvenirs, wild tales – and possibly Legionnaires disease! The doctor orders a 30-day quarantine. Will the girls make it out before they kill each other? Don’t miss the newest episode in Handbag’s long-running parody of the beloved TV sitcom.

David Cerda (Playwright) is the co-founder and Artistic Director of Hell in a Handbag Productions, now in its 18th year. As the resident playwright, his plays include POSEIDON! An Upside-Down Musical, Rudolph the Red-Hosed Reindeer, Christmas Dearest, Sexy Baby, Lady X- The Musical, The Drag Seed, and many more. Cerda was in inducted into the Chicago LGBT Hall of Fame in 2016 and received an honorary lifetime Jeff Award in 2017 for his contribution to Chicago theatre.

Spenser Davis (Director) is an award-winning director, playwright and filmmaker based out of Chicago. Previous directing credits include At The Table (Jeff Award for Best Director, Production and Ensemble), From White Plains, the world premieres of A Phase and his own play Plainclothes (Jeff Award for Best Ensemble), and the U.S. premiere of Labyrinth(Broken Nose Theatre); the world premieres of May the Road Rise Up and Adventures of Spirit Force Five (The Factory Theater); the U.S. professional premiere of Blue Stockings (Promethean Theatre); Bachelorette (Level 11); and the world premiere of Under the Tree (The New Colony). Other credits include A Red Orchid, American Blues, Mary-Arrchie, Strawdog, First Floor, Otherworl, and Pride Films and Plays. His production of At The Table was named “One of the Year’s Best” by The Chicago Tribune and was dubbed one of Storefront Rebellion’s “Top 25 of the Decade.” As a playwright, he's received the 2020 Elizabeth George Commission from South Coast Rep, the 2019 M. Elizabeth Osborn Award from the American Theatre Critics’ Association and was named a finalist for the Harold & Mimi Steinberg/ATCA New Play Award. His first play, Merge, has since been adapted as a television pilot. He is currently working on The Mag Mile, a series of plays which centers around working-class Chicagoans at intense moments of accountability. He’s the Director of Programming for Broken Nose Theatre, an ensemble member of The Factory Theater, and the series writer-director for Squid, a microbudget short-form comedy series on Amazon Prime. He’s represented by William Morris Endeavor.

About Hell in a Handbag Productions

Hell in a Handbag is dedicated to the preservation, exploration, and celebration of works ingrained in the realm of popular culture via theatrical productions through parody, music and homage. Handbag is a 501(c)(3) Not for Profit. For additional information, visit handbagproductions.org.