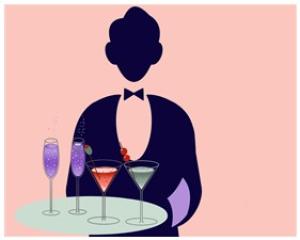 **** Recommended **** To open their final season, First Folio decided to reprise Jeeves Intervenes, which first appeared on the stage in the Mayslake library in 2008.  Most of the original cast members have returned too, making this a delightful evening.  Jeeves Intervenes is a comedy of manners, in a time when disputes and conflicts were settled with civility and good manners.  You can’t help laughing as Jeeves rescues that lovable twit, Bertie Wooster from family follies and his own scrapes.  Jeeves Intervenes is slightly insane and totally hilarious.  4 Spotlights

I must say that I absolutely loved Angela Weber Miller’s gorgeous set, Bertie’s posh flat in Mayfair has everything a gentleman needs. 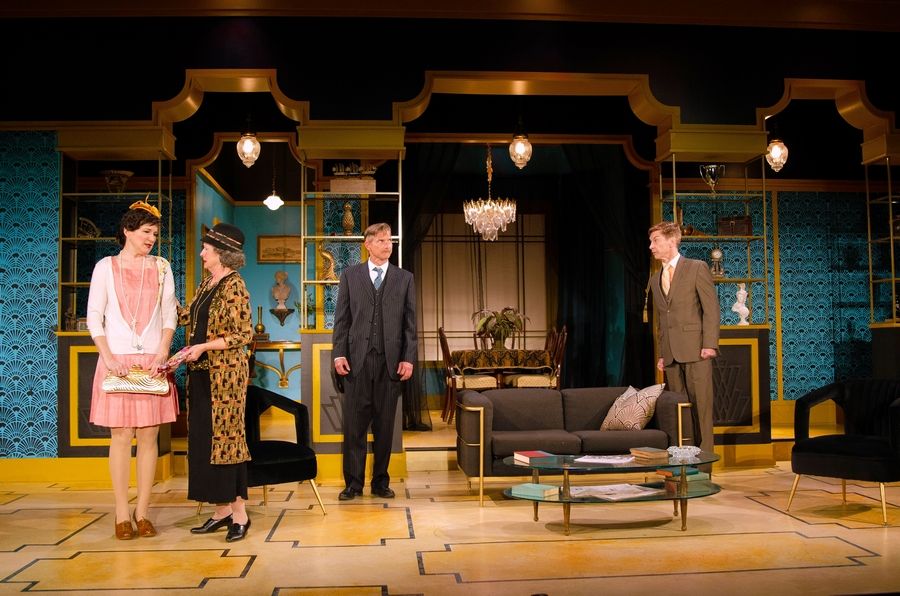 Bertie Wooster (Christian Gray) is a wealthy, not-too-bright member of the British upper-crust. He really is a twit, but he admits there’s not much upstairs and goes about living his best life. 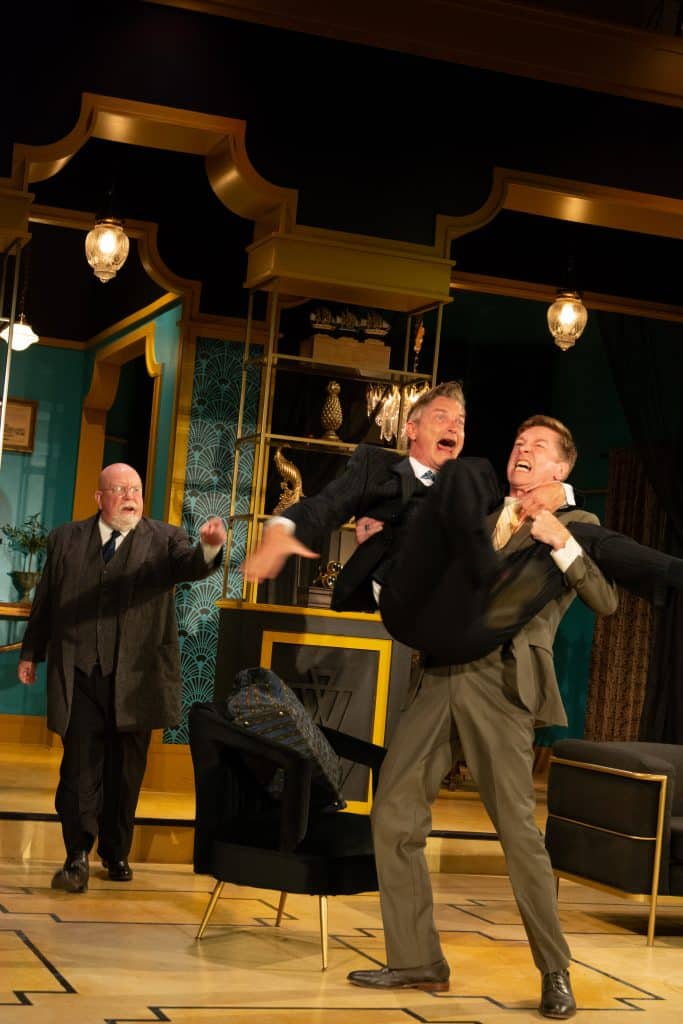 Bertie’s valet, Jeeves (Christopher John Grella) anticipates his every need.  Jeeves always has the perfect way for Bertie to extricate himself from any situation, and this one will require real finesse!  Bertie got a letter from his Aunt – who he calls a gorgon (among other names) so instead of going to Cannes, Bertie – and Jeeves – have to visit Aunt Agatha Gregson (Jill Shellabarger) and the rest of his relatives in the country -  and, to add insult to injury, Aunt Agatha and Gertie are in town and expect to see him.

If that isn’t bad enough, Aunt Agatha has picked out a suitable young lady, Gertrude Winklesworth-Bode (Lydia Berger Grey) for Bertie to marry.  Even though she has pots of money, Bertie says the whole Bertie and Gertie thing is just too too much, especially since she and Aunt Agatha have decided that after the wedding, she’s going to get rid of Jeeves – gasp!

Before Bertie can decamp, his hapless school friend, Eustace Bassington-Bassington (Nick Sandys) – by the way, it’s pronounced Bassington with a broad ‘a’ followed by Bassington with a long ‘a’ – shows up with his own pickle.  His uncle, Sir Rupert Watlington-Pipps (Ron Keaton), who gives him a small allowance, plans to ‘make something of him’ by sending him to India to work his way up in the jute industry! Eustace has been telling his uncle about his success in business, but now Sir Rupert is coming to visit and he’ll find out it’s all a ruse.  He has an idea, however.  Bertie’s flat could be his flat, just until his uncle agrees to continue his allowance.  When the hair-brained schemes Bertie and "Bassy" come up with backfires on them, Jeeves takes charge.

When Gertie stops in ahead of Aunt Agatha, Eustace takes one look at her and becomes completely inarticulate – a sign he’s fallen madly in love.  After Gertie leaves, he begs Bertie to put in a good word for him.  Of course, just to complicate things, Sir Rupert arrives a day early, and mistakes Bertie for a servant.  Then when the two sets of guests meet, the misunderstandings continue.  But wait, do Aunt Agatha and Sir Rupert have a history? 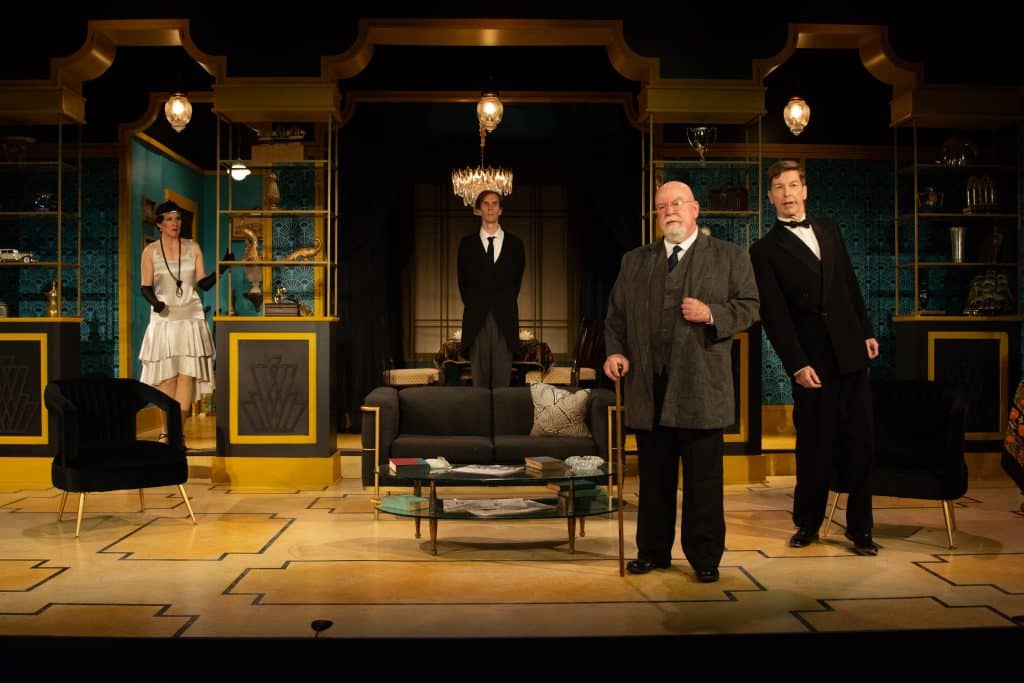 Many of the laughs came from sight gags, pratfalls and dead-pan looks.  Some bits I really enjoyed; when he’s home alone, Bertie does a tango with a sofa pillow, when Eustace tries to woo Gertie with philosophy, Bertie has to hide behind the sofa to coach him; when furious Bertie and Eustace are wrestling and caught by Sir Rupert - they reassure him by announcing they're rehearsing for a charity play; or when Aunt Agatha and Sir Rupert are brawling in the kitchen Jeeves brandishes some tickets to Cannes and they decamp! 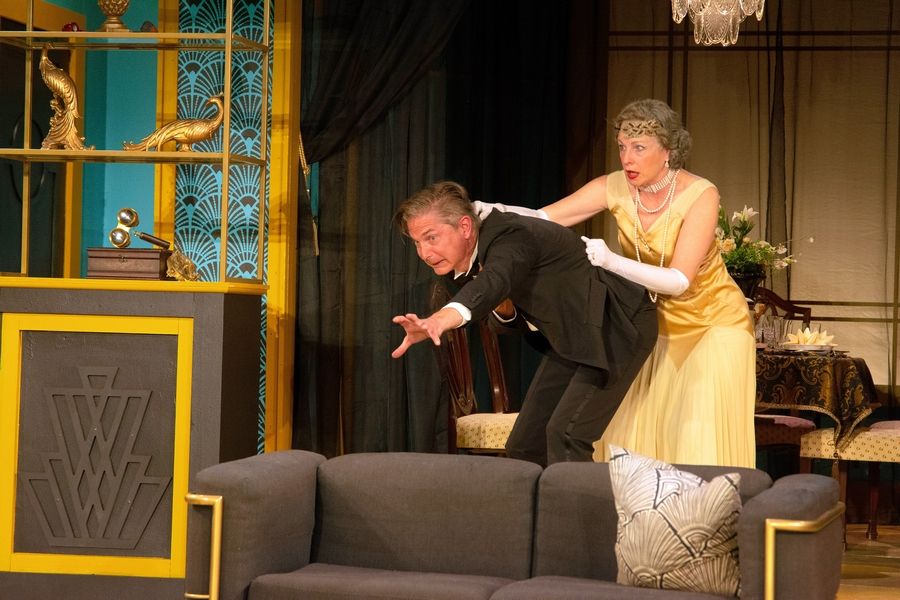 Note: Guests must show proof of vaccination before entering the building.  Guests are required to wear masks while inside the building.