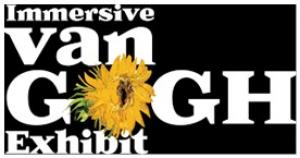 Lighthouse ArtSpace Chicago, a new venue within Chicago’s recently renovated landmark Germania Club Building, will open Thursday, Feb. 11, 2021 with the U.S. premiere of the blockbuster art experience Immersive Van Gogh. The three-story facility is dedicated to immersive art presentations, merging the boundaries between entertainment and culture to give visitors the sense that they are encountering art as never before. Utilizing the building’s Victorian Era architectural details, 35-foot-tall walls and multiple levels (including balconies), the venue will present vibrant art exhibitions that surround the viewer on all sides. 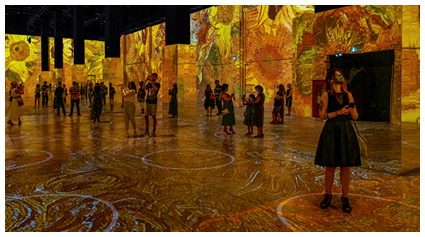 Tickets for the exhibition will go on sale to the public at 11 a.m. CST on Monday, Nov. 23 at vangoghchicago.com and by phone at 844-307-4644. Ticket prices start at $39.99 ($24.99 for children 16 or younger), with timed and flexible ticket options available. Tickets will be on sale for viewings Feb. 11 – May 2, 2020. The venue is easily accessible by public transportation and has ample parking in the nearby James House parking garage.

The hour-long walk through experience has been designed with health and safety as a priority. Admissions will be limited in line with the City of Chicago’s capacity guidelines with touchless ticket-taking; temperature checks upon arrival; hand sanitizer stations and social distancing markers prominent throughout the venue; and digitally projected social distancing circles on the gallery floors to ensure appropriate spacing. All guests must wear a face covering at all times during their visit to Lighthouse ArtSpace Chicago.

Immersive Van Gogh was designed by creative director and Italian film producer Massimiliano Siccardi, with original, mood-setting music by Italian multimedia composer Luca Longobardi, who provided a score that combines experimental electronic music with pure, ethereal and simple-seeming piano. Vittorio Guidotti is the Art Director. Siccardi and Longobardi are both pioneers of immersive digital art experiences and veterans of the Atelier des Lumières in Paris, where they created the world-renowned Van Gogh, Starry Night exhibition, among others. With more than 50 projectors illuminating over 14,000 square-feet, visitors to Immersive Van Gogh will be encircled from head-to-toe in Van Gogh’s brushstrokes and colors, including animated details from works such as Self Portrait with Felt Hat (1888), The Bedroom in Arles (1889), Irises (1889) and The Starry Night (1889).

“Immersive Van Gogh is a new way of encountering art, as it quite literally surrounds viewers on all sides with the brilliant work of one of the greatest painters of all time,” said Immersive Art Space Co-Producer Corey Ross. “Both connoisseurs and new admirers of Van Gogh’s work are guaranteed a breathtaking perspective on the influential artist’s oeuvre. Merging state-of-the-art technology, theatrical storytelling, animation and some of the finest works of art ever created, Immersive Van Gogh is a uniquely mesmerizing experience that seemingly transports the viewer into the artist’s mind to see these timeless works as never before.”

“Despite being unknown throughout his life, Van Gogh’s artwork has created a lasting impact through its emotional richness and simple beauty,” said Massimiliano Siccardi, Immersive Van Gogh designer. “Both myself and Luca Longobardi are very excited to visit Chicago and once again bring Van Gogh’s legacy to life in a way that is unique to the beautiful architecture of the Germania Club Building.”

The premiere of Immersive Van Gogh, which opened in Toronto this past July, has already received rave reviews from critics around the world. The Toronto SUN pronounced it “intense and emotional, cathartic and liberating” and Debra Yeo of the Toronto Star reflected “I wondered: could projections of paintings on walls and floors be thrilling? The answer is yes.” Called “dazzling” by Lonely Planet and a “blockbuster digital experience that has taken the art world by storm” by artnet news, the exhibition can be summed up by CTV’s description: “a completely new way of encountering art.” Immersive Van Gogh has already been enjoyed by more than 180,000 guests since its debut in Toronto during the pandemic in July 2020. During July and August 2020, according to Ticketmaster, it has surpassed worldwide ticket sales for any of the ticketing platform’s live cultural events.

About the Producers and Creative Team

Massimiliano studied at the London School of Contemporary Dance of London. But in 1990, he left the world of dance to begin a new journey in the world of video art. Massimiliano quickly became the artistic force behind several visual mise-en-scène for choreographers around the world. He also created video scenographies for numerous prestigious festivals and galas around the world. He also re-constructed the video mapping of the Basilica di Giotto and for the Teatro Petruzzelli of Bari, where one of his permanent installation’s virtually reconstruct the frescoes of the Cupola. Massimiliano is also a celebrated photographer and has had photo exhibitions in Spoleto and Rome, to name a few. He is professor of digital image elaboration at the Accademia di Comunicazione e Immagine of Rome. In 2012 Massimiliano received the prestigious International Award “Romaindanza” for his talent in the visual work of dance theatre. Since 2012, he has been artist in residence at the Carrières de Lumières - Atelier des Lumières where he authored the mise-en-scène of numerous immersive shows. He is currently creating projects within Italy as well as New York, Berlin, Leipzig and Rome.

Italian composer and pianist Luca Longobardi is a classically trained musician who incorporates the contemporary electronic music into his pieces. Born in 1976, Longobardi studied classical music in Italy and New York and went on to earn his doctorate in digital audio restoration in Rome in 2011. His works reveal a strong interaction between classical and contemporary music. The experience he has gained as a theatre musician has increased his interest in the relationship between sounds and spectacle; he has composed music for ballets and films and accompanied installations and experimental art productions (Atelier de Lumières - Paris, Carrière des Lumières - Baux-de-Provence, Kunstkraftwerk - Leipzig). At his multimedia performances and in his recordings, strong experimental electronic music meets pure, ethereal and simple-seeming piano playing that nevertheless relays deep emotions.

Founded in Toronto in 2003 by Corey Ross, Starvox Entertainment has ranked in Profit Magazine’s Fastest growing Canadian companies for 5 years in a row. Starvox produces, manages, represents and promotes cross-over performing arts shows and exhibitions that tour Canada, the United States and internationally. Ross has produced multiple theatrical shows in Chicago including the Harry Potter parody Potted Potter, Evil Dead The Musical, Champions of Magic and Sherlock Holmes. In Las Vegas, Ross produces three shows for Caesars Entertainment—Wow, Extravaganza and Potted Potter.  In the world of art exhibitions, Ross produces the Art of Banksy in London, Canada, the USA, Taiwan, and Japan as well as Immersive Van Gogh and Illusionarium in Toronto.

Toronto’s Show One Productions was founded in 2004 by the enterprising Russian born impresario Svetlana Dvoretsky. Initially focused on classical music, the company has since expanded greatly and is now a leading presenter of high-profile International artists, symphony orchestras, theatre and dance companies and special projects. The company is especially proud of its presentations of Mikhail Baryshnikov, John Malkovich, Michel Legrand, Slava Snow Show, Valery Gergiev and the Mariinsky Orchestra, Vladimir Spivakov and the Moscow Virtuosi, Eifman Ballet, the Vakhtangov Theatre, opera stars sopranos Sondra Radvanovsky and Hibla Gerzmava, and the late baritone Dmitri Hvorostovsky. Trio Magnifico Opera Gala – the historic union and once-in-a-lifetime event at The Four Seasons Opera House of soprano Anna Netrebko and tenor Yusif Eyvazov in their Toronto debuts, with Hvorostovsky in his last Toronto appearance – remains an exceptional musical memory in the history of the performing arts in Canada. Dvoretsky is a proud recipient of the Order of York by the Government of Canada for “an outstanding contribution in art and culture.”

New York-based Maestro Immersive Arts is the latest creative venture by Maria Shclover and Irina Shabshis, in partnership with Lighthouse Immersive (Canada) to introduce the immersive art genre in major markets across the United States.

Shclover is a classically trained pianist who later became a finance and international business professional, after graduating from NYU Stern School of Business. With extensive finance experience under her belt, Shclover founded Maestro Artist Management in 2004 that initially concentrated on presenting classical music and special events.

Shabshis joined Maestro Artist Management in 2005, with a classical music background and vast computer science experience. Maestro Artist Management focused on providing a bespoke experience to international artists and over the years became one of the leading boutique artist management companies that presented international tours of such legendary classical musicians as Yuri Bashmet, Olga Kern, Denis Matsuev, Mischa Maysky, Vadim Repin, Vladimir Spivakov and Dmitri Hvorostovsky. Together, the company presented more than 1,000 events and sold more than 700,000 tickets, working with international stars such as Michel Legrand, John Malkovich, Mikhail Baryshnikov and many others. As a presenter of some of the world’s best talent in the international performing arts, the company closely collaborated and partnered with some of the most prestigious art organizations, such as Carnegie Hall, Lincoln Center, Kennedy Center, The Metropolitan Opera and various Broadway productions.

Legendary Dutch painter Vincent Van Gogh (1853 – 1890) is recognized as one of the world’s greatest and best loved artists. He was born in the Netherlands to his father, Theodorus Van Gogh, and his mother, Anna Cornelia Carbentus, a moody artist whose love of nature, drawing and watercolors was passed on to her son. He worked at his uncle Cornelis’ art dealership when he had already been fluent in French, German and English, as well as his native Dutch. He fell in love with English culture when he was transferred to the Groupil Gallery in London in 1873.

During his short life he painted more than 2,000 artworks ranging from ordinary household items and self-portraits to surreal landscapes that inspire awe. Van Gogh was a post-Impressionist painter whose work — notable for its beauty, emotion and color — highly influenced expressionism in 20th-century art. He struggled with mental illness and remained poor and virtually unknown throughout his life.

He was tragically admitted to a psychiatric hospital after offering his severed ear to a woman at a local brothel. For hope, he turned to painting and nature, until one day when he went out to paint in the morning with a loaded pistol in his hand and reportedly shot himself in the chest. In his 37 years alive, Van Gogh only sold one painting, The Red Vineyards, to his brother Theo.