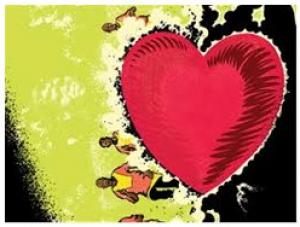 Directed by ensemble member Eric Simonson and Jonathan Berry, the life-affirming love story travels from Chicago’s Kingston Mines to South Africa and beyond. Lindiwe marries the traditional South African sounds from the province of KwaZulu-Natal (also known as Zulu) with Chicago’s iconic blues and features acclaimed  musicians Frank Russell (bassist) and Buddy Fambro (guitarist) performing alongside Ladysmith Black Mambazo. Lindiwe’s love story challenges us to define the boundaries between this world and the next, all the while exploring the sacrifices we make for love. 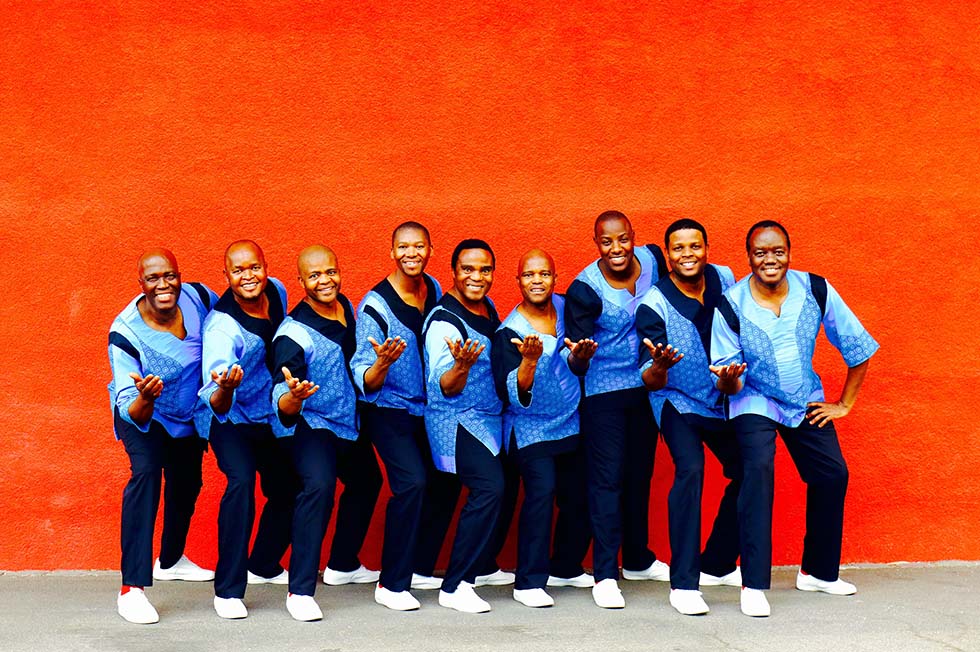 Lindiwe begins November 7 (opening November 17 at 6pm; press performance November 19 at 7:30pm) and runs through January 5, 2020 in the Downstairs Theatre (1650 N Halsted St). Single tickets to Lindiwe ($20-$109) are available at 312-335-1650 and steppenwolf.org. For the best seats and prices, Classic and Flex Memberships available: steppenwolf.org/membership.

Lindiwe marks the third collaboration between Steppenwolf and Ladysmith Black Mambazo. The legendary South African a cappella group and Steppenwolf first partnered in 1992 for The Song of Jacob Zulu, which was also directed by Eric Simonson and transferred to Broadway receiving six Tony® nominations. Actor Cedric Young who is featured in Lindiwe was part of the original Zulu cast. In 1996, Simonson, Steppenwolf and Mambazo teamed up again for the “beautiful and deeply moving” (Chicago Tribune) production of Nomathemba, which went on to The Kennedy Center. Simonson received an Oscar nomination for his 2000 documentary On Tiptoe: The Music of Ladysmith Black Mambazo about the group’s global impact and message of love and peace.

“We are very excited to be working with Eric Simonson and Steppenwolf again. What we love about the creative people at Steppenwolf is that they understand our group and our rich history. They are able to connect their theatrical dreams with our culture and our country of South Africa. Lindiwe is exactly this—a connection between our two cultures, American and South African. We have been writing new songs and look forward to presenting them to the people of Chicago. Ngiyabonga (Thank You in Zulu)!” shares Ladysmith Black Mambazo.

“With the play set in South Africa and Chicago, I thought it would be fascinating to combine the iconic music of Mambazo with Chicago’s iconic music, the blues. The result is incredible—Mambazo has a presence and a sound that hits you in the solar plexus, there is something deeply spiritual and timeless about them,” shares writer and co-director Eric Simonson.

Bios
Ladysmith Black Mambazo is South Africa’s five-time GRAMMY Award-winning singing group founded in the early 1960s. A radio broadcast, in 1970, opened the door to a recording career that includes more than 70 albums, earning 19 GRAMMY Award nominations and five GRAMMY Award wins, including their most recent album, Shaka Zulu Revisited for Best World Music Album. In the mid-1980s, American singer/songwriter Paul Simon famously incorporated the group's rich harmonies into the Graceland album, a landmark recording considered seminal in introducing South African music to mainstream audiences. When Nelson Mandela was released from prison he stated that Ladysmith Black Mambazo’s music was a powerful message of peace that he listened to while in jail. It was Mandela who called Ladysmith Black Mambazo “South Africa’s Cultural Ambassadors to the World.” The group sings from a traditional music style called isicathamiya (is-cot-a-ME-Ya), which developed in the mines of South Africa. The group has also recorded with Stevie Wonder, Dolly Parton, Sarah McLachlan, Josh Groban, Emmylou Harris and many others. Ladysmith Black Mambazo carries a message of Peace, Love and Harmony to every theater they perform in. We hope you will join them as they spread their message.

Eric Simonson's plays and adaptations at Steppenwolf include Nomathemba (written with Ntozake Shange and Joseph Shabalala), Carter’s Way, Honest, Slaughterhouse-Five and Fake. Other plays include Louder Faster, Magic/Bird, Bronx Bombers, Bang the Drum Slowly The Last Hurrah, Work Song: Three Views of Frank Lloyd Wright (with Jeffrey Hatcher), Edge of the World and Speak American. On Broadway, his credits include Lombardi, Magic/Bird and Bronx Bombers. His plays have been produced around the world and throughout the United States at theaters including The Huntington Theatre Company, L.A. Theatre Works, City Theatre of Pittsburgh, The Kennedy Center, Milwaukee Repertory Theater and more. His production of Steppenwolf’s The Song of Jacob Zulu received six Tony® Award nominations, including one for Best Direction. He’s received an Academy Award for his documentary A Note of Triumph, an Oscar nomination for his documentary Ladysmith Black Mambazo and an Emmy nomination for his HBO documentary about Studs Terkel. Simonson’s television work includes writing for The Man in the High Castle, Homecoming (Amazon), Killing Reagan and Swagger (Apple TV). He is the recipient of the Princess Grace award and is the Artistic Director of the Door Kinetic Arts Festival in Door County, Wisconsin.

Jonathan Berry is an Artistic Producer at Steppenwolf and a director and teacher in Chicago. Steppenwolf productions include The Curious Incident of the Dog in the Night-Time, The Children, You Got Older, Constellations, The Crucible, Gary and A Separate Peace. Berry is a Steep Theatre ensemble member where productions include Red Rex, Birdland, Earthquakes in London, Posh, If There Is I Haven’t Found It Yet, The Knowledge, Festen, Moment and The Resistible Rise of Arturo Ui. He’s also an ensemble member at Griffin Theatre where productions include the Harvest, Winterset, Pocatello, Balm in Gilead, Golden Boy, Spring Awakening, Punk Rock, Port and On the Shore of the Wide World. He has served as the Assistant Director for Anna D. Shapiro’s Broadway productions Of Mice and Men and This Is Our Youth. Other theatre credits include Dirty, Suicide, Incorporated, Othello (Gift Theatre); The Solid Sand Below, The World of Extreme Happiness for New Stages (Goodman Theatre); Kill Floor (American Theater Company); Little Shop of Horrors, Sideman (American Blues Theater); I am Going to Change the World (Chicago Dramatists); and The Casuals (Jackalope Theatre Company). He pursued his MFA in directing from Northwestern University. He has taught at University of Michigan, Northwestern University, University of Chicago, Columbia College and The School at Steppenwolf.

Plan Your Visit
Steppenwolf is located at 1650 N Halsted St near all forms of public transportation, bike racks and Divvy bike stands. The parking facility ($13 or $15, cash or card) is located just south of our theater at 1624 N Halsted. Valet parking service ($15 cash) is available directly in front of the main entrance starting at 5pm on weeknights, 1pm on weekends and at 12noon before Wednesday matinees. Limited street and lot parking are also available. For last minute questions and concerns, patrons can call the Steppenwolf Parking Hotline at 312.335.1774.

Accessibility
Committed to making the Steppenwolf experience accessible to everyone, performances featuring American Sign Language Interpretation, Open Captioning and Audio Description are offered during the run of each play. Assistive listening devices and large-print programs are available for every performance and the Downstairs and 1700 Theatres are each equipped with an induction hearing loop. All theaters feature wheelchair accessible seating and restrooms, and Front Bar features a push-button entrance, all-gender restrooms and accessible counter and table spaces.

Front Bar: Coffee and Drinks
Connected to the main lobby is Steppenwolf’s own Front Bar: Coffee and Drinks, offering an inviting space to grab a drink, have a bite, or meet up with friends and collaborators, day or night. Open Tuesdays – Sundays, Front Bar serves locally roasted coffee and espresso by Passion House Coffee Roasters and features food by The Goddess and Grocer. The menu focuses on fresh, accessible fare, featuring grab-and-go salads and sandwiches for lunch and adding shareable small plates and desserts for evening and post show service. front-bar.com

Year of Chicago Theatre
Steppenwolf Theatre Company is proud to be part of the 2019 Year of Chicago Theatre, presented by the City of Chicago and the League of Chicago Theatres. To truly fall in love with Chicago, you must go to our theatres. This is where the city bares its fearless soul. Home to a community of creators, risk-takers, and big hearts, Chicago theatre is a hotbed for exciting new work and hundreds of world premieres every year. From Broadway musicals to storefront plays and improv, there’s always a seat waiting for you at one of our 200+ theatres. Book your next show today at ChicagoPlays.com.

Teen Arts Pass
Steppenwolf Theatre Company is proud to support the Teen Arts Pass (TAP) initiative as an arts partner, which allows teens to experience live arts performances all around Chicago for only $5. All With TAP, Steppenwolf performances are now available to young people ages 13 to 19 for $5. Teens can register for free for TAP at teenartspass.org. TAP is a program of Urban Gateways, which engages young people in arts experiences to inspire creativity and impact social change.

Steppenwolf’s Mission: Steppenwolf strives to create thrilling, courageous and provocative art in a thoughtful and inclusive environment. We succeed when we disrupt your routine with experiences that spark curiosity, empathy and joy. We invite you to join our ensemble as we navigate, together, our complex world.