Lookingglass Theatre Company presents the holiday stream of Ensemble Member Mary Zimmerman’s The Steadfast Tin Soldier. Experience Chicago’s beloved holiday tradition with your family this holiday season, as the production streams into your home this December!  Based on Hans Christian Andersen’s story about a little tin soldier who never gives up, this production is a gorgeous spectacle of music and movement that is perfect for the whole family. 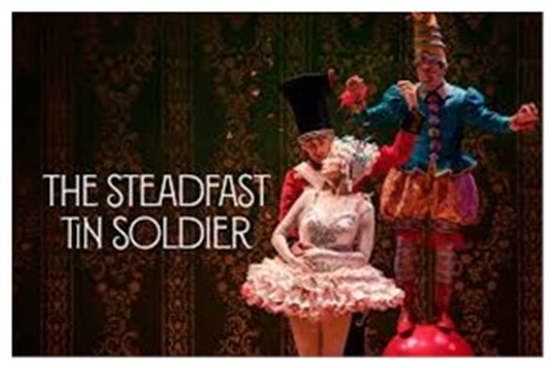 Online access to the production is $25 and includes Livestream and On Demand. An Opening Night Livestream will take place December 1, 2020 at 6:30PM Central. Opening night is $75 and includes a pre-show event with live music hosted by Ensemble Member Kasey Foster, who plays the Ballerina in The Steadfast Tin Soldier. Following the show, Artistic Producer Kareem Bandealy will host a Q&A with Adaptor/Director and Ensemble Member Mary Zimmerman, Co-Sound Designer, Composer and Ensemble Member Andre Pluess, and Costume Designer Ana Kuzmanic.

Tickets are on sale now at www.lookingglasstheatre.org.

“I’m very glad that our little Tin Soldier managed to march his way into the hearts of so many, and that he’ll be coming back again in the Holiday season steadfast as ever. We wanted to make something that was visually and emotionally overpowering—as well as very funny—and do that with no spoken language at all,” says Mary Zimmerman. “I’m thrilled that people of all ages and from around the world will be able to watch the show and feel it all the same, no English required. I think the silence of the characters—and the beautiful music that accompanies their adventures—allows older members of the audience to fall into a private, younger part of themselves; and for children, they are watching something in the manner they are used to: gathering up the story through the intensity of their earnest attention, through their intelligence which has no words.”

MARY ZIMMERMAN (Playwright/Director/Lookingglass Ensemble Member) is a writer and director and has worked with Lookingglass for more than 25 years. For Lookingglass, Mary has adapted and directed The Odyssey, The Secret in the Wings, The Arabian Nights, S/M, Eleven Rooms of Proust (Co-production with About Face Theatre), Argonautika, Treasure Island, and Metamorphoses, which toured to Berkeley Repertory Theatre and Guthrie Theater the winter/spring of 2019. Mary is also part of the Goodman Theatre artistic team where she adapted and directed The White Snake, The Jungle Book, Candide, The Notebooks of Leonardo Da Vinci, Silk, Journey to the West, Mirror of the Invisible World, and a re-creation of The Odyssey, as well as directing Wonderful Town, Pericles, The Baltimore Waltz, All’s Well That Ends Well, and most recently The Music Man. She has also worked with: New York Shakespeare Festival in the Park, Berkeley Repertory Theatre, Oregon Shakespeare Festival, Huntington Theatre Company, McCarter Theatre, Arena Stage, and Shakespeare Theatre in Washington, D.C. New York credits: Lincoln Center, Second Stage Theatre, Brooklyn Academy of Music, and on Broadway at Circle in the Square Theatre. In the world of opera, she directed and co-wrote the libretto Galileo Galilei (composed by Philip Glass) that was produced at Goodman Theatre, Brooklyn Academy of Music, and the Barbican Theatre in London. She has directed four operas at Metropolitan Opera: Rusalka, Lucia Di Lammermoor, La Sonnambula, and Rossini’s Armida, each of which has been broadcast live into movie theatres worldwide. In 1998, Mary received a MacArthur Fellowship and in 2002, the Tony Award for Best Director of a Play for Metamorphoses on Broadway. She is a Professor at Northwestern University, where she holds the Jaharis Family Endowed Chair in Performance Studies.

KASEY FOSTER (Ballerina/Lookingglass Ensemble Member) is a performer, choreographer, producer, and puppeteer. She a member of Actors’ Equity Association. Kasey was most recently seen on the Lookingglass stage in last winter’s production of The Steadfast Tin Soldier. Other Lookingglass credits include 20,000 Leagues Under the Seas, Treasure Island, Moby Dick, and The Little Prince. Recent on camera credits include: Chicago Med and IFC’s Documentary Now! Kasey sings with bands Babe-alon 5, Grood, Kevin O’Donnell, Old Timey, This Must be the Band, and Nasty Buoy. She has created over fifty original works, and produces two annual series called Dance Tribute and The ACTual Show. kaseyfoster.com

LEANDRO LÓPEZ VÁRADY (Associate Arranger/Music Director/Piano) was previously seen at Lookingglass in last season’s The Steadfast Tin Soldier. Leandro was born in Buenos Aires, Argentina and graduated from the Catholic University of Argentina as Licentiate in Music, majoring in Composition with a Gold Medal and Awards. He traveled Asia with the Eldeé Young Quartet, and worked in Saint Martin’s Episcopal Church as Music Director. Leandro has performed around the world, including Poland, Cuba, and Bulgaria as pianist of the Orbert Davis’ Chicago Jazz Philharmonic; as well as Symphony Center, Harris Theater, Millennium Park, Auditorium Theater, Chicago Jazz Festival, Taste of Chicago, and the Jazz&Pop Festival in Buenos Aires. Leandro is the pianist for the Doug Lofstrom’s New Quartet, Steve Hashimoto's Sueños, Juli Wood's Chicago Calling, and the Cerqua Rivera Dance Theatre Music Ensemble. Leandro received a Gold Record Award for his work on Mietek Szcześniak’s Nierówmi album. He teaches at Lewis University in Romeoville, IL.

GREG HIRTE (Violin) is an actor, musician, and composer in LA and Chicago. Greg was most recently seen at Lookingglass in last season’s The Steadfast Tin Soldier and before that, Treasure Island. Other recent theatre credits include: his 19th season with Goodman Theatre’s A Christmas Carol, Luther in Ring of Fire: Music of Johnny Cash, and Leon in Hank Williams: Lost Highway (American Blues Theater). Other Chicago credits include: performance and musical compositions for Goodman Theatre, Chicago Shakespeare Theater, Court Theatre, Drury Lane Theatre, Victory Gardens Theater, and Piven Theatre Workshop (Jeff Award Nomination for Best Original Score, Sarah Ruhl’s Melancholy Play), as well as several international theater and music festivals. Greg is a member of several bands both local and national.

JUAN HORIE (Cello) makes his debut at Lookingglass. He has previously worked with Teatro Vista in The Abuelas as a cellist and musical consultant. Since his arrival to Chicago in 2017, he has performed with prominent Ensemble Dal Niente, is member of the 5th Wave Collective, Unconducted Orchestra, and often joins regional orchestras in the Chicagoland area. In his native Venezuela he was part of the renowned Teresa Carreño Youth Symphony Orchestra, participating in five European tours and one Asian tour, and in festivals such as Salzburg Fetzspiele and Beethoven-fest, and halls like Berliner Philharmonie, and Amsterdam Concertgebouw, among others. Teresa Carreño Youth Orchestra became Teresa Carreño Symphony Orchestra after a nation-wide audition, in which Juan earned a seat. He also played in Orquesta Barroca Simón Bolíva. Juan studied cello at Academia Latinoamericana de Violoncello in Caracas, and IUDEM, and Baroque Cello at the Academia Latinoamericana de Música Antígua.

CONSTANCE VOLK (Flutes) Constance Volk is a returning performer with Lookingglass for The Steadfast Tin Soldier. She performs with and is a founding member of Ensemble Dal Niente. Constance doubles on flute and vocals with Musical Bridges to Memory. She plays with Fulcrum Point New Music Project. Constance has worked with Spokane Symphony, Spektral Quartet, International Contemporary Ensemble, and Sympathy for Astronauts. She sings and flutes with Vicarious Tool Tribute. Constance also works as a visual artist in a variety of styles. Her paintings, poster art, coloring books, and portraits can be viewed at: constancevolk.com

Written and Directed by:         Mary Zimmerman

The production was filmed by HMS Media.

The production will offer 8 showtimes/week. All patrons will have access to the production for 48 hours after the performance date and time.

Members of The Secret Passage receive a discount.

About The Secret Passage

The Secret Passage is a digital membership that reveals a corridor of hidden doors. And behind each door lives an exclusive peek into the Lookingglass process. From mind-expanding artist conversations to first-ever play workshops to archival audio recordings of our former glories to discounts on classes and public Lookingglass events, the perks of the pass will cast you as a true “insider” and a key player in preserving our future.

The Secret Passage memberships are $50, for access through August 2021, or $8 monthly. Members will receive a discount to The Steadfast Tin Soldier, along with access to the following monthly programming, plus more to be announced:

For more information on The Secret Passage, visit www.lookingglasstheatre.org/secret-passage

Inventive. Collaborative. Transformative. Lookingglass Theatre Company, recipient of the 2011 Regional Theatre Tony Award, was founded in 1988 by eight Northwestern University students. Now in its 32nd Season, Lookingglass is home to a multi-disciplined ensemble of artists who create story-centered theatrical work that is physical, aurally rich and visually metaphoric. The Company, located in Chicago’s landmark Water Tower Water Works, has staged 70 world premieres, received 161 Joseph Jefferson Award Nominations, and produced work all across the United States. In 2016, Lookingglass received the MacArthur Award for Creative and Effective Institutions and in 2017, was the recipient of the League of Chicago Theatres’ Artistic Achievement Award.