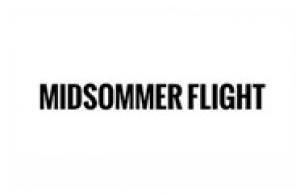 The decision was made on Friday, March 13 and announced via social media. Showcasing the directors' work in a public performance has always been a major part of the spirit of Directors Flight, in all of the planning and dreaming and preparing, and remains a priority as Midsommer Flight determines next steps and new dates. The company will be following the news in the coming weeks as the health crisis continues to evolve.

Wolf says, “As disappointing as this is, a public health crisis requires all of us to take responsibility as citizens of the world. We believe this is the right choice and we hope that our action, combined with everyone else's cancellations and social distance measures, will help to flatten the curve of the pandemic.

Announced in fall 2019, Directors Flight is a program with the goal of promoting, cultivating, and inspiring classical directing talent in Chicago. The announcement last fall included a call for applications to participate. Instead of a tuition-based model, Midsommer Flight has opted to pay each selected director a small fellowship stipend for their participation.

Since January, Directors Flight has been providing one-on-one mentorship, along with various workshops led by Founding Artistic Director Beth Wolf, company members, and guest artists. Workshops include abridging text for performance, rehearsal strategies, working with fight/intimacy and music directors, casting processes, and more. The program was to culminate in three workshop performances of Shakespeare’s MUCH ADO ABOUT NOTHING, which were to have been presented April 2-4. Each of the five directors were to direct one act of the comedy, giving them the chance to gain hands-on rehearsal experience, as well as the chance to invite industry leaders to see their work.

Wolf explains her inspiration for the program. "Looking around Chicago, I recognized that there are few opportunities outside of MFA training for directors to hone their craft. Acting classes are everywhere, but directing classes are few and far between. There are also limited opportunities for directors to work on Shakespeare plays -- as ubiquitous as Shakespeare seems to be, the reality is that only a few storefront theatres produce Shakespeare regularly, and so there are few chances for emerging directors to gain the skills and experience to do it really well. Midsommer Flight is uniquely positioned to share all that we have learned since our founding in 2012. I'm so excited to find both emerging and established directors who are passionate to learn more about Shakespeare."

ABOUT MIDSOMMER FLIGHT. Midsommer Flight is a theatre company dedicated to presenting high quality, accessible productions of Shakespeare’s plays in Chicago communities. After the company’s well-received inaugural production of A MIDSUMMER NIGHT’S DREAM in 2012, the Chicago City Council honored Midsommer Flight with a resolution praising “the Midsommer Flight theater troupe on their dedication to bringing the arts to underserved communities.”  The company incorporated as a not-for-profit in the state of Illinois in early 2013 and has since produced ROMEO AND JULIET (2013), MUCH ADO ABOUT NOTHING (2014), MACBETH (2015), TWELFTH NIGHT (2015, 2016, 2017, 2018, 2019) AS YOU LIKE IT (2016), HAMLET (2017), TWO GENTLEMEN OF VERONA (2018) and THE TEMPEST (2019). The company was nominated in 2019 for the third time for the League of Chicago Theatres “Emerging Theatre Award.”

Midsommer Flight is committed to presenting financially accessible theatre. Summer productions are 100% free to the public (donations gratefully accepted) and winter programming is Pay-What-You-Can. In addition, live music will be presented prior to each summer performance. Audiences are encouraged to come early and bring a picnic to enjoy this free programming.  For more information visit www.midsommerflight.com.
###