The action increases to 290 the number of state-designated sites protected by the Nature Preserves Act. 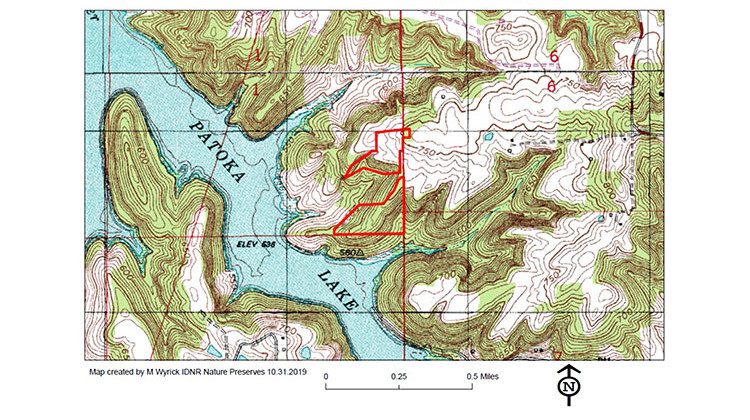 Since 1987, the Indiana State Museum has been excavating the cave. As a result, scientists have gained information about Indiana’s past climate, plants, and animals during the latter part of the ice age. In addition, many noteworthy animal and plant species are found in Patoka Hills—a cave-adapted springtail insect and a cave millipede, both of which lack eyes and pigmentation and are rare worldwide. Noteworthy plant species at Patoka Hills include two state endangered plants. The preserve is owned and managed by the Division of State Parks.

In other action, the NRC granted preliminary adoption to a number of amendments to 312 IAC 9 regarding the Division of Fish & Wildlife, the most significant of which follow. Granting preliminary adoption starts a long and deliberative process, including a public comment period that will include two in-person hearings at two different locations for each rule package.

Amendments include adding ruffed grouse to the list of state endangered species of birds. Historically, ruffed grouse likely existed throughout Indiana. Populations have steadily declined and are now at less than 1% of the levels observed in the 1980s. Ruffed grouse are on track for local extinction without major management actions. Adding ruffed grouse to the state endangered species list will require environmental reviews in forested environments to consider the impacts on this species. Allowing ruffed grouse to become totally extirpated from Indiana would indicate a failure to act as stewards for this species and require expensive restoration efforts that would be unlikely to succeed without the pressing habitat management.

Amendments to some of the fisheries rules granted preliminary adoption include adding cisco and Western sand darter to and removing Northern brook lamprey from the state’s list of endangered species of fish. Cisco used to occur across Indiana, but currently is limited to seven lakes and, without intervention, will likely become locally extinct. Western sand darter is thought to once have occurred across Indiana but is currently restricted to a few disjointed areas.

Additional fisheries rule changes that were preliminarily adopted include establishing a 14-inch minimum size limit for sauger, saugeye and walleye taken on the Ohio River; reducing the daily bag limit to six sauger, walleye, and saugeye in aggregate; and reducing the possession limit to 12 in total. The rationale is that current sauger regulations are not providing enough protection of that species from overfishing. Because sauger grow relatively quickly, anglers should see increases in the number of large sauger and enjoy better quality fishing experiences within two years. Kentucky has already made this change.

Also regarding fish and wildlife related amendments to 312 IAC 9, the NRC granted preliminary adoption to all other rule proposals listed on the agenda.

The NRC also approved an amendment to the non-rule policy that sets the dates for Free Fishing Days, which are four days a year on which Indiana residents can fish without a license. The dates are the first full weekend in June, June 6-7 this year, which are also associated with the first full weekend of National Fishing and Boating Week sponsored by the Recreational Boating and Fishing Foundation. The other two dates this year are May 3 and Sept. 26. The May date coincides with the first day of Visit Indiana week, and the September date coincides with National Hunting and Fishing Day and National Public Lands Day.

The NRC also approved amendments to the non-rule policy governing the Roster of Indiana Animals, Insects, and Plants that are Extirpated, Endangered, Threatened, or Rare (also described as special concern). The action adds alligator gar and eight species of mussels to the list of species of special concern and makes a number of changes to the lists of insects and plants.

The NRC also accepted reports and will consider at a later meeting granting preliminary adoption regarding separate citizen petitions to create a Lake Manitou Ecozone and a Simonton Lake Ecozone.

In other action, the NRC:

- Approved a report from the Division of Hearings to the Marshall County Circuit Court regarding its consideration of a petition to establish an East Shore Conservancy District on Lake Maxinkuckee, an issue for which the NRC serves an advisory role.

- Granted final adoption to amend 312 IAC 5-9-2, adding Juice Box Cove to the list of locations in Geist Reservoir where a person must not operate a boat at greater than idle speed.

More details on all actions taken by the NRC yesterday and supporting documents can be found at nrc.IN.gov/2354.htm.

The NRC is an autonomous board that addresses topics pertaining to the DNR and the NRC Division of Hearings.

NRC members include the DNR director, heads of three other state agencies (Indiana Department of Environmental Management, Indiana Office of Tourism Development, and the Indiana Department of Transportation), six citizens appointed by the governor on a bipartisan basis, the chair of the DNR’s advisory council, and the president of the Indiana Academy of Science. The Academy of Science president and the agency heads, other than the DNR director, may appoint proxies to serve the commission in their absences.