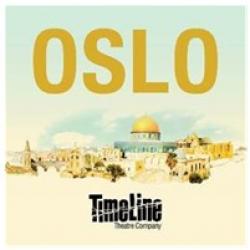 Playwright J. T. Rogers said, “…I burrowed into this sliver of history as deeply as I could, in order to summarize a specific moment in time and place.  Then I took the who, what, when, and where of journalism and threw them into a blender.”  He went on, “I wanted to write a play, not a textbook or a reenactment.  I sought to capture the spirit of those real events – their craziness, fear, joy, and heartbreak.  I wanted to tell a story about men and women risking their own lives and challenging their own beliefs as they struggle without a road map toward peace.”

Rogers did end up with a play about real people, every single one of whom had his/her real hopes and fears.  The play runs an emotional gamut as the characters – who all have their own agendas – try to find common ground.  Some surprisingly funny jokes are told over a round or two of adult beverages.

I can’t say enough about the supporting cast either.

By the way, while you’re waiting to be seated, check out the Oslo timelines on the pillars in the lobby.  If you have questions about the backstory of “Oslo”, there’s a handy insert in the program chock full of information about everyone involved.

Timeline Theatre production of “Oslo” runs through October 20th at Broadway in Chicago’s Broadway Playhouse, 175 E. Chestnut, Chicago.  Parking is available in the Watertower Place garage, $14 with theater discount (get a voucher card from an usher).