"Over the Tavern" - Review by Carol Moore 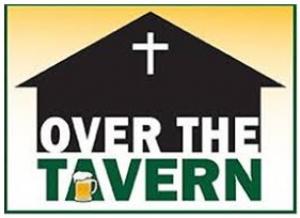 As I listened to comments in the lobby after the show, I heard a couple of younger ‘glued-to-their-phones’ types who couldn’t believe that the Pazinski family only had one phone – and that it was in the kitchen!   I know audience members of a certain age will get the references, but for those afore mentioned ‘glued-to-their-phones’ types, the program has a synopsis of 1959 in America & Around the World – everything from statehood for Alaska and Hawaii to Mattel introducing the first Barbie doll to The Ed Sullivan Show on Sunday nights. 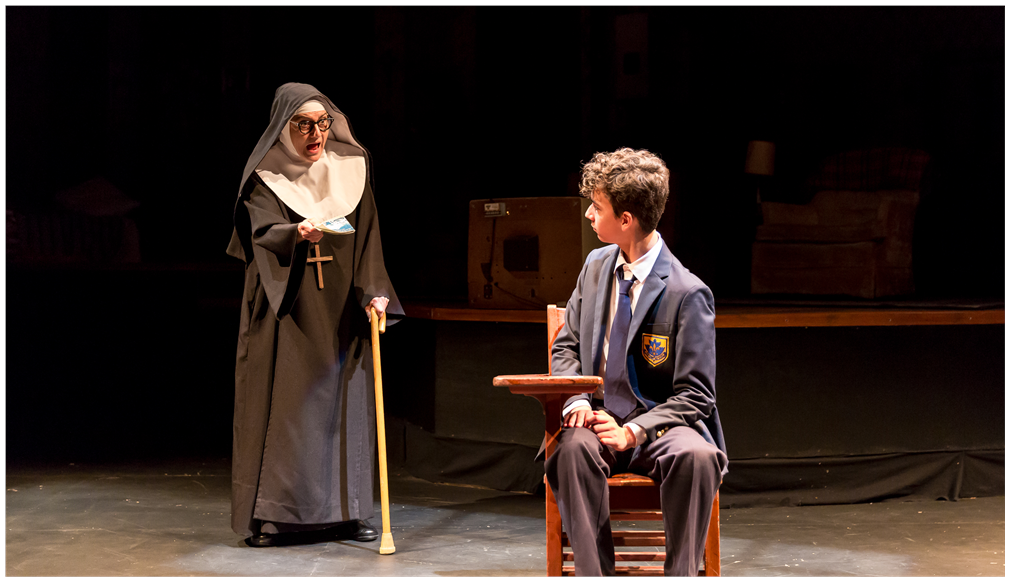 12-year old Rudy Pazinski (Logan Baffico), who loves to impersonate Ed Sullivan, is having a teeny bit of difficulty with Sister Clarissa (Janet Ulrich Brooks).  Although he needs to learn his catechism so that he can be confirmed, it’s not going too well.  He gets detention after detention for clowning around and for questioning everything ‘Ster’ says.  Eventually, tired of 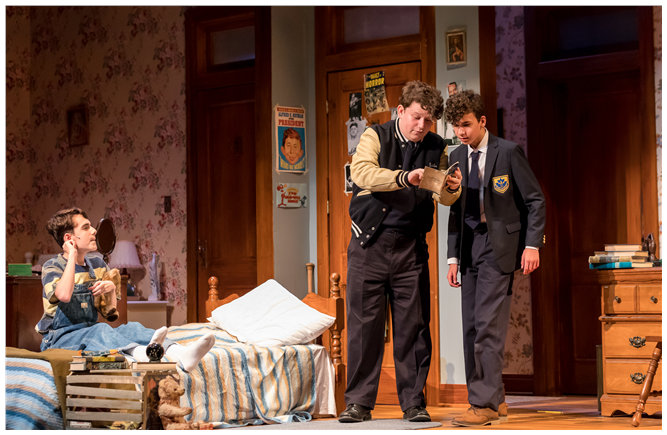 answering his questions, she tells him to stop thinking and start memorizing.

At home, his older brother Eddie (Seth Steinberg) heard a rumor about a girl getting undressed in front of her bedroom window.  If he can figure out who she is, he might catch a glimpse of something.  He wonders whether and impure thought is a venial or a mortal sin. 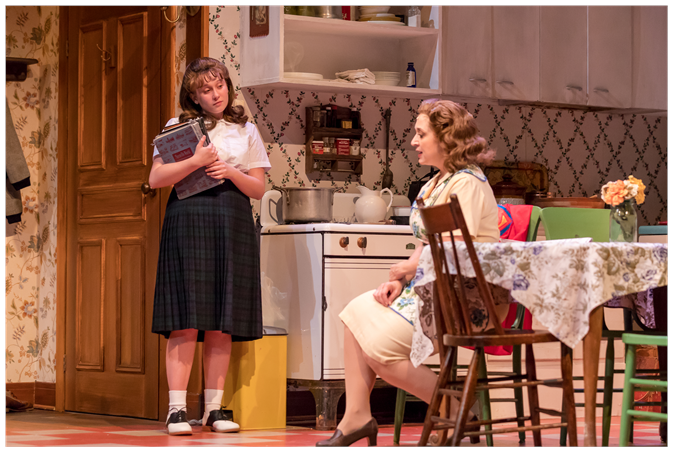 During the ‘50s, Catholic girls were expected to dress modestly.  Skirts were below the knee, makeup – if allowed at all – was limited to lipstick.  Rudy’s sister Annie (Isabelle Roberts) is rebelling against those rules – as most girls did in the ‘50s – by rolling her uniform skirt up at the waist to make it a little shorter, teasing her hair, wearing makeup.  She’s a champ at flouncing around the house.

The Pazinski kids are positive their mother, Ellen (Cory Goodrich), has eyes in the back of her head.  No matter what they’re doing, she catches them.  She always seems to be working and watching out for her youngest, George (Julian Solis), who loves his Superman cape and his toys.  When he says a naughty word, she tries to stop him from saying it, but of course he drops the word at all the worst times. 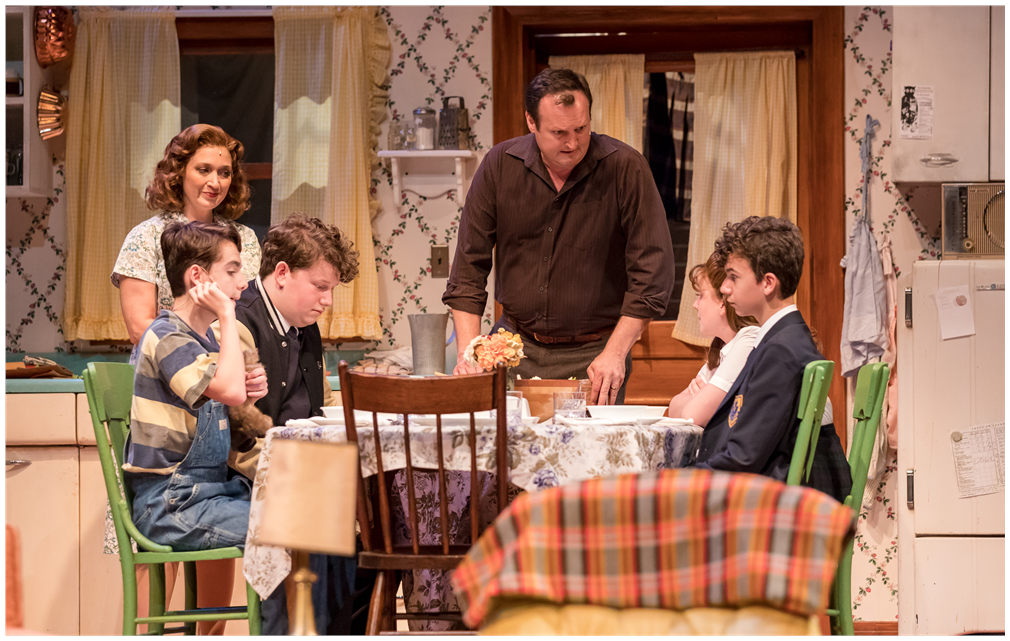 Eddie, Rudy and Annie all wish their father, Chet (Eric Slater) will come home in a good mood, and remember the spaghetti – which he probably won’t.

When Sister Clarissa decides to visit the Pazinski home to talk about Rudy, everyone else thinks that he/she MUST have done 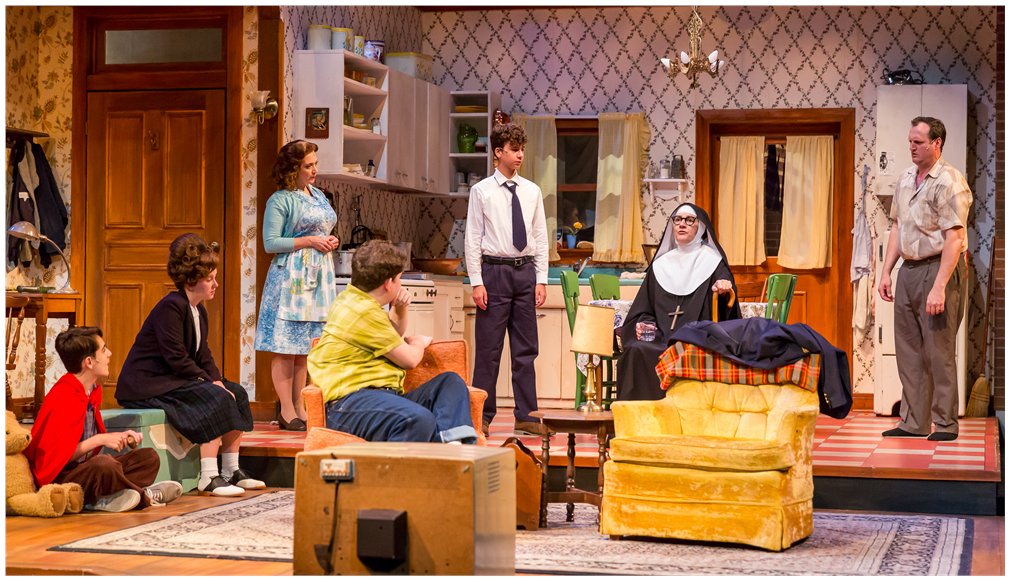