Porchlight Music Theatre is proud to partner with Hershey Felder Presents - Live from Florence on its next live streaming production: Hershey Felder as “Sholem Aleichem” in Before Fiddler starring Felder as famed “Tevye the Milkman” and featuring Klezmerata Fiorentina premiering Sunday, Feb. 7 at 7 p.m. CST. Tickets for Felder’s one-man show are $55 per household and are available for purchase at www.PorchlightMusicTheatre.org.

This production will benefit national US theatres and arts organizations including Porchlight Music Theatre. Tickets are now on sale at www.PorchlightMusicTheatre.org and include the live broadcast and a week of extended “on-demand” viewing access to the recording (available one-hour after the live broadcast ends). The broadcast will also be available for latecomers to purchase through the week of “on demand” access. Viewing access for all ends Sunday, Feb. 14 at 11:59 p.m. CST. 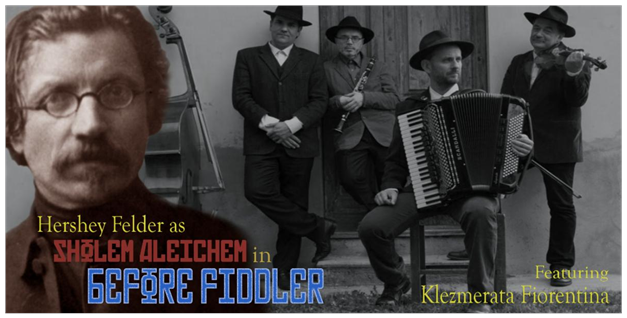 Before the beloved musical Fiddler on the Roof, there was Sholem Aleichem and his beloved character of “Tevye the Milkman.” Before the popularized songs, "Tradition," "If I Were a Rich Man," "Matchmaker," and others, there was music of the old world-- a music that imitated talking, laughing, weeping and singing, where musicians didn't just make music, they spoke to you in song through this music called Klezmer. In Florence, Italy, one of the oldest artistic centers in the world, a group of musicians have been virtuosos in Florence's world famous Maggio Musicale symphony by day, and then become the Klezmerata Fiorentina by night. With Hershey Felder as their storyteller, and their ancient European roots, Felder executes a performance by taking on the role of great writer Sholem Aleichem himself – giving us the true story of what happened before Fiddler. Filmed on location where events actually took place, this world premiere features stories and characters of Sholem Aleichem with a story and music that is sure to move your soul.

Ticket holders will receive their live stream link Friday, Feb. 5, via the email used to register for the event. The performance may be streamed from a smart TV, computer, smartphone or tablet.

Sholem Aleichem was a Yiddish author and playwright whose stories became the basis of the wildly popular musical, Fiddler on the Roof. When he was only 24 years old, Aleichem published his first story, “Tsvey Shteyner” ("Two Stones"), and eventually became a central figure in Yiddish literature by 1890. Aleichem became known as the "Jewish Mark Twain" for his similar writing styles and pen name usage.

ABOUT HERSHEY FELDER (Writer and Performer)

Named to Time Magazine’s 2016 “Top 10 Plays and Musicals,” Hershey Felder has played more than 6,000 performances of his self-created solo productions at some of the world’s most prestigious theatres and has broken box office records consistently. American Theatre Magazine has said, “Hershey Felder is in a category all his own.” His shows include: George Gershwin Alone (Broadway’s Helen Hayes Theatre, West End’s Duchess Theatre); Monsieur Chopin; Beethoven; Maestro (Leonard Bernstein); Franz Liszt in Musik, Lincoln: An American Story, Hershey Felder as Irving Berlin, Our Great Tchaikovsky, and A Paris Love Story. His compositions and recordings include Aliyah, Concerto for Piano and Orchestra; Fairytale, a musical; Les Anges de Paris, Suite for Violin and Piano; Song Settings; Saltimbanques for Piano and Orchestra; Etudes Thematiques for Piano and An American Story for Actor and Orchestra. Felder is the adaptor, director and designer for the internationally performed play-with-music The Pianist of Willesden Lane with Steinway artist Mona Golabek; producer and designer for the musical Louis and Keely: ‘Live’ at the Sahara, directed by Taylor Hackford; and writer and director for Flying Solo, featuring opera legend Nathan Gunn. Felder has operated a full-service production company since 2001, and in 2020 created a new brand LIVE FROM FLORENCE, that operates a “theatre at home broadcast company,” based in Florence, Italy. Early broadcasts included; Hershey Felder as IRVING BERLIN; Hershey Felder, BEETHOVEN; Hershey Felder as GEORGE GERSHWIN ALONE; Hershey Felder, BACKSTORY – The Story Behind the Creation of Berlin, Gershwin & Bernstein; Cooking French in Florence with Jeff Thickman & Hershey Felder.

Klezmerata Fiorentina is a quartet composed of principal players of one of the leading Italian operatic and symphonic orchestras, the Maggio Musicale Fiorentino. In 2005, the violinist and violist Igor Polesitsky, clarinetist Riccardo Crocilla, accordionist and bassoonist Francesco Furlanich and double bass player Riccardo Donati formed the ensemble to explore new ways of creative, unwritten elaboration of authentic Yiddish folk material, the musical heritage of the group’s founder, Igor Polesitsky. Since the group’s debut in 2005 at the Progetto Martha Argerich Festival in Lugano, Switzerland, Klezmerata Fiorentina has appeared on some of the world’s most prestigious stages. Of special note are their performances at the Quirinale Palace in Rome, the official residence of the president of the Republic of Italy, at the Great Hall of Congresses in the Kremlin, Moscow’s Dom Musyki, the Rachmaninov Hall of Tchaikovsky Conservatory, the St. Petersburg Philharmonic society, Società di Quartetto in Milan, Amici della Musica in Florence, the Skirball Center in Los Angeles, the Italian Festival delle Nazioni, the Verbier Festival in Switzerland, Natalia Gutman’s Kreuth Festival in Germany, the Ashkenaz Festival in Toronto, the Chutzpah! Festival in Vancouver, the Telavi Festival in the Republic of Georgia, the Summertime Festival in Jurmala (Latvia), etc.

Porchlight Music Theatre is the award-winning center for music theatre in Chicago. Through live performance, youth education and community outreach we impact thousands of lives each season, bringing the magic of musicals to our theatre home at the Ruth Page Center for the Arts in the city’s Gold Coast and to neighborhoods across the city. Porchlight has built a national reputation for boldly reimaging classic musicals, supporting new works and young performers, and showcasing Chicago’s most notable music theatre artists, all through the intimate and powerful theatrical lens of the “Chicago Style.”

Now in our 26th season, our quarter-century production history includes more than 70 mainstage works with 15 Chicago premieres and five world premieres. Porchlight’s commitment to the past, present and future of music theatre led the company to develop the Porchlight Revisits and New Faces Sing Broadway program series, both quickly becoming audience favorites.

Porchlight's education and outreach programs serve schools, youth of all ages and skill levels, and community organizations, and we love our ongoing collaboration with Chicago Youth Centers. We annually award dozens of full scholarships and hundreds of free tickets to ensure accessibility and real engagement with this uniquely American art form.

The company’s many honors include 178 Joseph Jefferson Award (Jeff) nominations and 45 Jeff awards, as well as 33 Black Theatre Alliance (BTA) nominations and 12 BTA awards. This past season, Porchlight Music Theatre “graduated” to the Large Theatre tier of the Joseph Jefferson Equity Awards, stiffening our competition for the Jeff committee’s recognition. Porchlight celebrated its eight nominations in both technical and artistic categories and awards for Jermaine Hill, music direction and Lorenzo Rush Jr, solo performance, most notably Best Musical/Revue and Best Ensemble for Duke Ellington’s Sophisticated Ladies.

Through the global pandemic, Porchlight has emerged as one of Chicago’s leaders in virtual programming, quickly launching a host of free offerings like Sondheim@90 Roundtables, Movie Musical Mondays, Porchlight by Request: Command Performances, and WPMT: Classic Musicals from the Golden Age of Radio. For the 2020-2021 season, Porchlight has announced a full Fall schedule of all-new ticketed virtual programs including Broadway by the Decade, New Faces Sing Broadway 1987, as well as collaborations with LA Theater Works, and much more coming in the new year.

Porchlight Music Theatre is proud to partner with Hershey Felder Presents - Live from Florence on its next live streaming production: Hershey Felder as “Sholem Aleichem” in Before Fiddler starring Felder as famed “Tevye the Milkman” and featuring Klezmerata Fiorentina premiering Sunday, Feb. 7 at 7 p.m. CST. Tickets for Felder’s one-man show are $55 per household and are available for purchase at PorchlightMusicTheatre.org. This production will benefit national US theatres and arts organizations including Porchlight Music Theatre. Tickets are now on sale at PorchlightMusicTheatre.org and include the live broadcast and a week of extended “on-demand” viewing access to the recording (available one-hour after the live broadcast ends). The broadcast will also be available for latecomers to purchase through the week of “on demand” access. Viewing access for all ends Sunday, Feb. 14 at 11:59 p.m. CST.