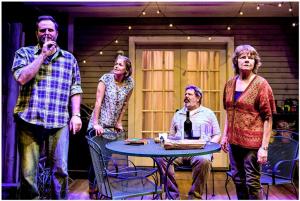 Jennifer (Linda Reiter) and Bob (H.B. Ward) Jones have been married for many years. Recently, Bob has been having some issues with his health and can't seem to get a definitive diagnosis from his doctor, who claims to be a specialist in treating stroke patients. Jennifer has become Bob's primary caregiver. One evening at twilight, while sitting outside around their wrought-iron patio table and enjoying the cool summer breezes, they reflect upon the mendacity of their day yet appreciate the natural beauty surrounding them.

Disrupting this idyllic tranquility are the new neighbors, John (Joseph Wiens) and his wife Pony (Cortney McKenna), a much younger married couple who also share the same surname as Jennifer and Bob. Barging in, after making such a racket that you would think that raccoons had been rummaging through the trash cans, John and Pony are returning home from dinner at a local restaurant and just wanted to stop in to introduce themselves. Within minutes of meeting, Pony askes to use the restroom. Seconds later, John also wants to know if there is a second bathroom that he could possibly use, having drunk way too much iced tea at dinner. Both Jennifer and Bob realize that they now have two complete strangers roaming freely within their home.

Days later, Jennifer runs into John at the grocery store and things become a little bit alarming when John inadvertently reveals that he has been watching Jennifer closely, even letting slip that he saw her crying and also took notice of her favorite power bar that she had been snacking on earlier in the parking lot. Things escalate from there, but this is by no means a psychological thriller. Instead, Eno presents two very different couples who don't seem to be able to communicate with one another.

While the rapport tends to flow freely later on between Jennifer and John, and Bob and Pony also connect over borrowing a cup of sugar, these two married couples desperately lack the ability to easily share their innermost thoughts or feelings with their respective partners. The dynamics work best when the spouses don't share the same scene, but it would have been great to see just one scene between Jennifer and Pony alone with one another. Perhaps the strongest scene is the one between Bob and John. Bob has wandered into John and Pony's backyard late at night. The two men share a peculiar yet hilarious discussion, mostly in complete darkness until one or the other moves and activates the motion-detected porchlight.

This is a play in which what goes unsaid speaks larger than what is actually spoken. The cryptic pauses plus the stops and starts to conversations may not be to everyone's particular taste. Puzzling elements abound. A bottle of red wine which was gifted as a token of friendship goes unopened. A dead squirrel discovered under the boxwoods. A crisper drawer in the refrigerator that contains rotting food. The mysterious reason that John and Pony have relocated to Jennifer and Bob's neck of the woods.

Wiens is wonderful as John, a character who more than any other drops key words or phrases into his conversations, only to circle around back to that subject matter several minutes later. Ward is also very strong as Bob, a man in rapid physical and mental decline, yet he nearly always maintains a sunny disposition. Ward handles the opaque nature of Bob deftly and sympathetically presents a man trying valiantly to hold on to blurred and hazy memories. But it is Reiter who makes the deepest impression as Jennifer. Finding just the right balance between the utter weariness of looking after her ailing husband and the graciousness of welcoming new acquaintances as allies, Reiter is phenomenal. She delivers a beautiful performance, whether holding a sorrowful moment just long enough or conveying the sadness in her eyes when she has no words to express her frustration. So invested is she in this role that at the curtain call, while taking her bows, it took her nearly ten seconds to let down that stoic facade and actually smile.

Tickets: $24 to $74. Student Rush tickets available day of performance for $15. $15 industry tickets on Thursdays with code "INDUSTRY." Single tickets are currently available at www.shatteredglobe.org or www.theaterwit.org, in person at the Theater Wit box office or by calling (773) 975-8150. Group discounts are currently available by contacting groupsales@shatteredglobe.org or by calling (773) 770-0333.

Running time is 100 minutes with no intermission.