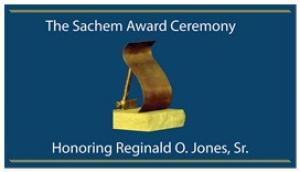 Reggie’s life is defined by his mission-minded mentorship and his unstoppable desire to help people maximize their potential,” Gov. Holcomb said. “He’s achieved great success by demonstrating that with limitless determination, a thirst for learning and with someone who believes in you, there’s no dream that’s impossible.” 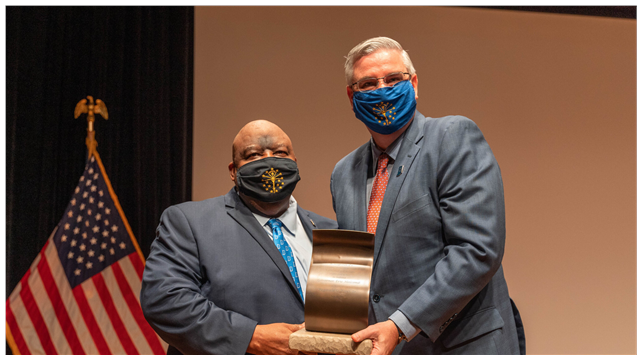 “It’s remarkable to think of Reggie’s impact and his influence whether bring ingenuity and encouragement to entrepreneurs, or providing help and hope to the homeless through Wheeler Mission, or the work he’s done instilling character and values into Indiana’s youth, in helping them to grow to be responsible,” Vice President Mike Pence. “Reggie has made a profound difference.”

The Sachem is given annually to recognize a lifetime of excellence and moral virtue that has brought credit and honor to Indiana. Previous recipients include Holocaust survivor Eva Mozes Kor (2017), Rev. Theodore M. Hesburgh, president emeritus of the University of Notre Dame and world statesman (2006), and long-time businessman and civic leader P.E. MacAllister (2014). Jones is the fourth Sachem honoree named by Gov. Holcomb.

Born in Prichard, Alabama, Jones grew up in a small four-room home without running water and sometimes without food. Determined to make a better life for himself and his family, he set out to become a McDonald’s owner/operator.

After serving his country in the Army and working his way up the corporate ladder, Jones moved to Indianapolis in 1996 and purchased two restaurants located at 38th and Illinois streets, and 16th and Meridian streets. In the inner city, Jones saw poverty and people in need of hope.

Determined to be a catalyst for change by helping others find their path to success, Jones offered generous education scholarships to his crew members. He encouraged children to excel in education by creating an incentive program at Indianapolis Public Schools through which the students earned free bikes. Jones gave away more than 10,000 bikes over 20 years. His innovative approach became known as “McMiracle on 38th Street.” The McMiracle program went on to be mirrored in McDonalds franchises across the country, leading the Indiana Black Expo to give him the Rev. Charles R. Williams Excellence Award.

“Wired with gratitude, faith, humility and optimism, Reggie now pays it forward by making his communities a better place and inspiring others to achieve their dreams,” said Joe Erlinger, president of McDonald’s USA. “He is a role model in everything the Sachem represents – a lifetime of excellence and moral virtue. The world is a better place with Reggie in it.” 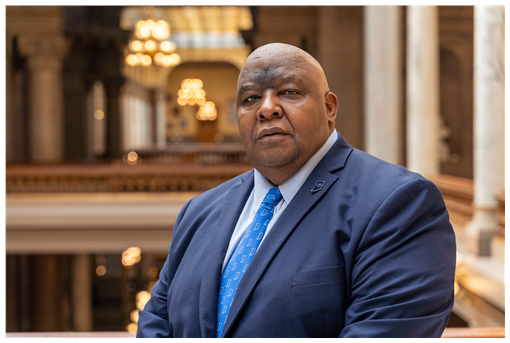 Today, Jones owns and operates four franchises around central Indiana through which he continues to give back to his employees and their communities. His dedication has led him to earn two Ray Kroc Awards, which honors the top 1 percent of McDonald’s restaurant managers from around the world, a regional Ronald Award for his outstanding contributions to customers and the community, and a Ronald McDonald House Charities Award of Excellence.

Additionally, Jones received a Certificate of Appreciation for Community and Business Endurance from the U.S. Department of Commerce, a Sagamore of the Wabash from Gov. Mitch Daniels, and has been honored by the NAACP.

“Most of the time students come to Martin University to help improve themselves, but even more so, improve opportunities for their families and help make their community better. Reggie is a living example of that,” said Dr. Eugene White, former president of Martin University. “Reggie’s legacy is one of service and dedication. He’s been a visible leader for the whole community to follow.”

He and his wife, Tracey, live in Indianapolis with their two youngest daughters Rebecca and Regina.

In 1970, Gov. Edgar D. Whitcomb introduced the Sachems, a group of business, industry, publishing, banking and legal leaders, who served as state hosts, welcoming visitors to Indiana and promoting the state’s culture and economy. The organization’s name came from the Algonquin term applied to village leaders, implying wisdom, judgment and grace.

Following Whitcomb’s term, the Sachem project was not pursued, and the organization dissolved in 1989. Whitcomb visited Gov. Daniels in 2005 to acquaint him with the concept. Gov. Daniels recreated the Sachem to underscore the importance of moral example; achievement alone without exemplary virtue does not qualify a person for this recognition.

Fifteen Sachem awards have been bestowed since the honor was revived in 2005:

2006: Rev. Theodore Hesburgh—Former president of the University of Notre Dame and world statesman

2011: William A. “Bill” Cook—Philanthropist and cofounder of Cook Inc.

Each Sachem honoree receives a specially designed sculpture. All Sachem recipients are selected by Indiana’s governor.