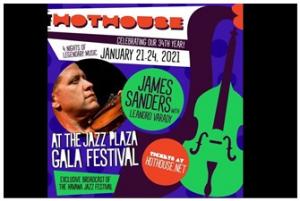 The day-by-day schedule for “HotHouse Meets Havana” is as follows:

Larry Blumenfeld (Host). Blumenfeld writes regularly about jazz for The Wall Street Journal. His culture reporting has appeared in The New York Times, Daily Beast, Salon and Village Voice among other publications and websites.

·          Roscoe Mitchell. Saxophonist Mitchell is considered one of the key figures in avant-garde jazz, integrating influences from everywhere—world music, funk, rock, classical—to create music that is at once beautiful and complex. He has performed on more than 85 recordings and written in excess of 250 compositions in the jazz and classical realms.

·          Harold Lopez-Nussa. Lopez-Nusa, a graduate of the Instituto Superior de Artes, spent three years in the touring band of Grammy Award-winner Omara Portuondo. In 2005, he won first prize in the Jazz Solo Piano Competition at the Montreux Jazz Festival. He released his ninth album, “Un Día Cualquiera” in 2018.

·          Hamid Drake and Michael Zerang. Drake is widely regarded as one of the best percussionists in jazz and improvised music, playing alongside many renowned artists pianist Herbie Hancock, saxophonist Pharaoh Sanders and bassist Reggie Workman, among others. As a percussionist, composer and collaborator, Zerang has more than 100 titles in his discography and has toured to 35 countries since 1981, and working with collaborators, primarily in U.S. and Europe.

·          Bobby Carcasses. In 1980, pianist Carcasses organized the first Jazz Plaza Festival, bringing to Cuba a host of international artists including Dizzy Gillespie, Charlie Haden and Airto Moreira. The festival became an annual event, with Carcasses and his band performing each year. He also toured extensively throughout Europe and the USA, performing alongside Tito Puente, Eddie Palmieri and many other big Latin jazz names.

Richton Thomas (Host). Thomas is a fine artist, board member at HotHouse, host of a jazz radio program broadcasting out of the University of Chicago’s WHPK 88.5 FM and seasonal emcee for the Museum of Contemporary Art’s Jazz on the Terrace series.

·         Michael Herrera. Saxophonist Herrera has worked extensively with jazz master Bobby Carcacess.  He is also a favorite of Grammy Award-winners Joaquín Betancourt, Maraca and most notably Omara Portuondo. He has performed at the best venues in Italy, France, Germany, Switzerland, Russia, Holland, Spain and Canada.

·         Ari Brown with Yosef Ben-Israel and Charles Heath. Brown has long been considered by critics as a master saxophonist, one of the elder practitioners of “the Chicago sound” and an artist deserving of much recognition. Ben-Israel is double bass player who has long been associated with the AACM and frequently performs in groups led by Ernest Dawkins and Brown. Heath is a versatile and renowned musician playing anything from Jazz and Blues to Gospel and Latin music. He is currently the drummer for jazz legend Ramsey Lewis.

·         Coco Elysses with Alexis Lombre and Ivan Taylor. Elysses won an ALTA Award for Best Original Music in a Play and was a featured musician in the critically claimed FOX TV drama “Empire.” Lombre is a young jazz pianist with a recently debuted album, “Southside Sounds,” that soulfully reflects on her upbringing on Chicago’s Southside. Since 2005, Taylor has been a member of Mulgrew Miller's trio and sextet Wingspan, touring internationally.

·         Frank Fernandez. Critics have described Fernández as "a man touched by the divine," "someone without precedent, and “an unforgettable pianist.” He has written more than 650 works in different formats, from ballets, choirs and symphonies to arrangements of popular music, as well as television and radio themes.

Mark Ruffin (Host). This Grammy-nominated broadcaster, producer and writer has won the regional Chicago/Midwest Emmy Awards twice, and been the Program Director/On-Air host for Sirius XM's Real Jazz channel since 2007.

·         James Sanders and Leandro López Várady. Sanders leads the long-running Latin jazz groups Conjunto and Proyecto Libre. He is a bold presence in Chicago’s creative music movement and has performed around the world staying true to his Caribbean roots. López Várady received a Gold Record Award for his participation in Mietek Szcześniak’s “Nierówmi” album and is a pianist for the Orbert Davis’ Chicago Jazz Philharmonic.

·         Ben La Mar Gay with Mike Reed and Mayda Del Valle. La Mar Gay is a Chicago South Side native and renowned collaborator; his true composing technique is giving life to an idea while exploring and expanding on the term “Americana.” Reed leads and co-leads several working area bands and is founding director of the Pitchfork Music Festival, the current programming chair of the Chicago Jazz Festival. Poet and performer Del Valle won the 2001 National Poetry Slam title and has been featured in Latina Magazine, The New York Times and named by Smithsonian Magazine as one of America’s Young Innovators in the Arts and Sciences.

·         Orlando "Maraca" Valle. Valle is today one of the most internationally recognized Cuban musicians. His albums have received numerous awards at at "Cubadisco" and other important record industry events.

·          Ruy López-Nussa. Percussionist López-Nussa is a star of a weekly Culture Ministry concert to support social isolation in the fight against COVID-19. He has served as professor at Havana’s Alejandro García Caturla and Amadeo Roldán Music Schools and performed at international jazz festivals. He is also author of “Ritmos de Cuba. Percusión y Batería” (Rhythms of Cuba. Percussion and Drums), that delves into the roots of Cuban culture.

·          Tomeka Reid and Junius Paul. Cellist/composer Reid is a Foundation of the Arts and 3Arts Awardee. He was recently recognized as a “New Jazz Power Source” by the New York Times. Composer, bandleader and acoustic and electric bassist Paul’s debut album, “Ism,” (2019) garnered a 4-star rating from Downbeat Magazine.

·          Edward Wilkerson with Jamie Kempkers and Jim Baker. As founder and director of the cutting-edge octet 8 Bold Souls, and the 25-member performance ensemble Shadow Vignettes, cellist/clarinetist/composer Wilkerson has toured festivals and concert halls throughout the world. Cellist Kempkers, was a member of the Holland, Mich. band Marzuki and is currently an ensemble member of Tatsu Aoki’s MIYUMI Project. Baker is an eccentric and deep-thinking synth master who has jammed with some of the best in the world.

·          Alejandro Falcón. Pianist/composer Falcón has shared the stage and collaborated with the great artists of Cuba and the world including Arturo O'Farrill, Brad Mehldau, Buena Vista Social Club and Omara Portuondo, Oscar de León and Randy Brecker. In 2008 he founded Alejandro Falcón and Cubadentro, a jazz group composed of piano, bass, drums and tumbadoras.

“In 2016, when President Obama re-established diplomatic relations with Cuba, HotHouse was awarded a US State Department grant to create a cultural exchange between Chicago and Guantanamo,” says Horberg. “This special award furthered our substantial work presenting Afro-descendant music, a hallmark of HotHouse’s projects since the 1980s. Now, this special invitation to curate and exclusively broadcast “Jazz Plaza” one of the premiere music events in the world, is an additional great honor. It is even more exciting to have been given the opportunity to present some of my favorite Chicago-based musicians, artists HotHouse has nurtured for decades, as part of the festival, virtually bringing these artists to Cuba and showcasing their incredible talent to the international jazz community.”

HotHouse precedes the presentation of the “Jazz Plaza” Festival with a special Martin Luther King Day Program Monday, Jan. 18 beginning at 7 p.m. featuring the performance by ShaZah, the duo of sitarist Shanta Nurullah and vocalist Zahra Baker, of a reinterpretation of the historic African anthem “Lift Ev’ry Voice and Sing.” A free panel discussion, Cuba, The Conversation Continues moderated by James Early, former Director of Cultural Studies and Communication at the Center for Folklife Programs and Cultural Studies at the Smithsonian Institution, Washington, D.C. will follow focusing on Afro-descendant musical traditions and bridge building between the two countries. Panelists include Grammy Award- winning composer Arturo O’Farrill, veteran band leader Michele Rosewoman, and musicians Jean-Christophe LeRoy and James Sanders. For more information or for a link to the discussion, visit www.hothouse.net.

Individual tickets for each of the four internationally broadcast music programs of “Jazz Plaza:” “HotHouse Meets Havana” are $25 or $75 for all four programs or $125 for a table. Programs will be streamed beginning at 7 p.m. CST nightly, and will be available for viewing continuously for 24 hours to allow viewers in any time zone to enjoy the concerts at a convenient time. The location of the program streams will be emailed in advance to ticket holders. The 2021 “Jazz Plaza” festival concerts are presented as a benefit for the non-profit 501(c)(3) HotHouse to support their ongoing work.

Prior to “Jazz Plaza:” “HotHouse Meets Havana” programming Jan. 21-24, HotHouse’s streaming platform HotHouseGlobal hosts a free 30-minute winter dance party beginning at 6:30 p.m. CST with DJ Madrid. Whether he is playing at a private palace in Istanbul, an exclusive event in Buenos Aires, The World DJ Conference in Korea or an intimate lounge in Paris, Madrid’s exceptional talents, sophisticated style, and contagious excitement are a must-see. A fan of HotHouse, Madrid is creating a special DJ set for HotHouse to open the festival each night. Everyone is encouraged to bring mix up your favorite Cuban cocktail and break out your best dance moves. For more information, visit www.hothouse.net.

ABOUT HOTHOUSEA nonprofit, arts presenting organization formed in 1987 in Chicago, HotHouse (hothouse.net) has been one of the premiere cultural institutions in the U.S. In March, 2020 HotHouse developed an online streaming initiative to serve the NGO small business and cultural industries adversely affected during this health and economic crisis. The HotHouseGlobal  channel facilitates a variety of multi-arts and community-based content and a worldwide network in the social justice and cultural sector. Since March, more than 14 million people have tuned in to HotHouseGlobal.

Cuban Instituto de la Musica invited HotHouse to become the international presenter of “Jazz Plaza” following HotHouse’s production of the July “Concert for Cuba,” which was viewed by more than 10 million people worldwide. Horberg was also tapped to select the American musicians who will be performing as part of internationally broadcast “Jazz Plaza” festival program and participating in a roundtable discussion. The four internationally broadcast programs will showcase a variety of contemporary composers and ensembles performing original music created especially for this occasion. HotHouse’s arrangement with the Cuban Instituto de la Musica for “HotHouse Meets Havana” marks the first time that “Jazz Plaza” will be available to be enjoyed by an international audience outside of Cuba. The pre-recorded performances from Chicago were all performed within strict adherence to social distance practices.

Executive Director, Producer and Curator Horberg founded HotHouse in 1987 and has been at the forefront of creating countless internationally recognized festivals, public programs and international exchange projects. She has been awarded Best of Chicago, Chicagoan of the Year and many other top honors for her work as a leader in groundbreaking cultural work. Her work in Cuba began in 1984 with various exchange projects and most recently she was the inspiration behind “Concert for Cuba” July 2020 and the resolution to normalize relations with Cuba in the Chicago City Council.

The Cuban Instituto de la Musica (ICM) is a department within the Ministereo de Cultura and is one of the most important cultural institutions of the country. It is tasked with the implementation of the policy of development, promotion, and projection of music inside and outside the island. It has a system of subordinate institutions, which house more than 16,000 artists throughout the country. Today it is the governing institution of the Music Development Programs, whose ultimate objective is to achieve a stronger affinity with culture in the Cuban people, applying a strategy aimed at stimulating, developing and implementing actions supporting musical institutions throughout the country. ICM produces a variety of shows in the country that ensure the development, protection, enrichment, defense, and promotion of the musical heritage of the nation.