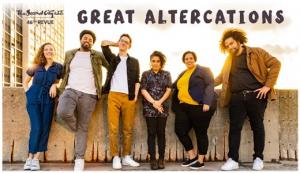 **** Highly Recommended **** The Second City e.t.c.’s 46th Revue, Great Altercations is downright hilarious.  Everywhere I looked, the folks in the audience were laughing – not polite little titters, either – I’m talking guffaws!  And this revue is family friendly!  We all know that family situations and altercations can be hilarious – afterwards.  This revue is all about pointing out the humor in things we’ve all experienced.  4 BIG Spotlights

The cast and crew developed this revue – all the black-outs, silly sketches, improv, tongue-in-cheek commentary, satire and slapstick comedy over several weeks with audience input and participation.  Audience interaction has always been an important part of any performance at The Second City.  My friend Helen and I had seats close to the stage so our waiter warned us that we might be asked to interact with the cast.  By the way, if you were to return again in a few weeks, you might see a completely different show.

The cast of six, Alex Bellisle, Mark Campbell, Terrence Carey, Laurel Krabacker, Claudia Martinez and Jordan Savusa, really relate to the audience, involving individuals in sketches, asking for questions, inviting comments, even off-color comments!  One woman’s name and answers appeared again and again throughout the show.  Finally, this cast can laugh at themselves – as they did a couple of times during the performance.

The Second City’s e.t.c.’s 46th Revue, Great Altercations is in an open run at the e.t.c. Theatre, The Second City, 230 W. North Avenue, Chicago.  Parking in the adjacent garage is readily available but pricey.  Bar-food and drinks are available throughout the performance.  Running time is just about two hours, with an intermission.  Performances are Thursdays at 7:00, Fridays and Saturdays at 7:00 and 10:00 pm, Sundays at 5:00 pm. Tickets start at $29.  FYI (312) 337-3992 or www.secondcity.com.