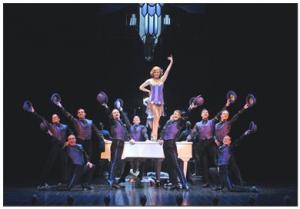 Based on the book by Michael Stewart and Mark Bramble, with music by Harry Warren, and lyrics by Al Dubin, this Tony-winning musical spectacular will continue Lyric’s tradition of presenting Broadway treasures in larger-than-life productions.

The show’s original Broadway production triumphed, captivating audiences in a run that lasted nearly nine years. It won the Tony Award for Best Musical in 1980 and the Olivier Award in the same category for the London premiere production in 1984.

"We are thrilled to be presenting 42nd Street to our audiences next spring" said Lyric’s General Director, President and CEO Anthony Freud. "This terrific production continues Lyric’s tradition of staging beloved Broadway musicals on a scale that is rarely seen. Anyone who is looking forward to seeing West Side Story on the Lyric stage in a few months should take the opportunity now to reserve their seats for 42nd Street and experience this extraordinary new-to-Chicago production."

42nd Street is the story of Peggy Sawyer, an aspiring actress from Allentown, Pennsylvania, who gets her big break and rises from chorus girl to star status overnight. The musical is filled with unforgettable songs, including "We’re in the Money," "You’re Getting to Be a Habit with Me," "Sunny Side to Every Situation," and many others. This high-energy production is as beautiful to see as it is to hear. A tap dancing ensemble of 30 phenomenal artists will bring this story to life, joined by members of the Lyric Opera Chorus and Orchestra. Casting will be announced at a later date.

All making their Lyric debuts, the 42nd Street creative team have extensive international experience on Broadway, in theater, and opera. Director and choreographer Stephen Mear is acclaimed for his productions, some of which include Guys and Dolls at Royal Albert Hall, Die Fledermaus at The Metropolitan Opera, and Sunset Boulevard on Broadway. Set and costume designer Peter McKintosh has designed shows on Broadway, Shakespeare’s Globe, The Old Vic, and Regent’s Park Open Air Theatre. Lighting designer Chris Davey has designed for major international theaters such as The Old Vic, Théâtre du Châtelet, and Royal Albert Hall.

Single tickets for 42nd Street can be purchased at lyricopera.org/42ndstreet or by calling Audience Services at 312-827-5600.