THE SUFFRAGE PLAYS by Artemisia Theatre, opening November 1 at The Den

The program will include two comedies by Evelyn Glover: MISS APPLEYARD’S AWAKENING and A CHAT WITH MRS. CHICKY, along with PRESS CUTTINGS by George Bernard Shaw. Running November 1-24 at The Den Theatre, 1331 N. Milwaukee Avenue, Artemisia’s THE SUFFRAGE PLAYS will celebrate the 100th anniversary of women’s suffrage in America. “Suffrage Plays” emerged during the British women’s suffrage movement and were popular from 1907-1914. 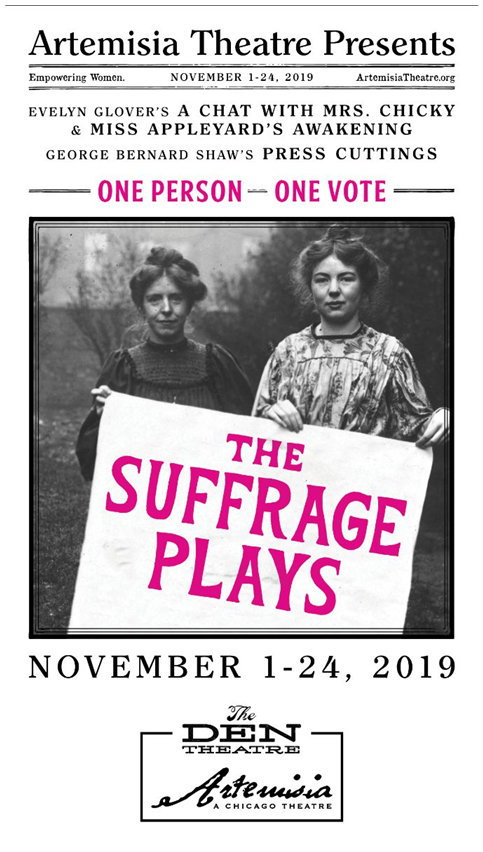 The evening of one-acts will be unified through the directorial vision of Beth Wolf (Artistic Director, Midsommer Flight) and a diverse cast playing multiple characters. Wolf’s cast will include Megan DeLay (an ensemble Member with Promethean Theatre where she was last seen as Lady Croom in ARCADIA), Lucinda Johnston, (Paramount’s IN THE HEIGHTS and A Red Orchid’s THE MANDRAKE), Brittani Yawn (THE RIDICULOUS DARKNESS with Sideshow Theatre), Tom McGrath (Stephano in Midsummer Flight’s THE TEMPEST), Ross Frawley (the original production of Promethean’s GROSS INDECENCY and Idle Muse’s THE VEIL) and Vijay Sarathi (BLUE STOCKINGS with Promethean Theatre Ensemble).  DeLay and Johnston will appear in all three plays, and Yawn will have roles in MISS APPLEYARD’S AWAKENING and PRESS CUTTINGS. McGrath, Frawley, and Sarathi will appear only in PRESS CUTTINGS, as Glover’s MISS APPLEYARDS’ AWAKENNING and A CHAT WITH MRS. CHICKY, as was typical of many Suffrage plays, call for all female casts.

Suffrage plays served to reveal many of the double standards that women faced daily and featured familiar everyday situations with relatable characters. Though the three suffrage plays in Artemisia’s program are all comedies, they have a clear political focus. Director Beth Wolf says, “I am so thrilled to be working with Julie Proudfoot and the entire team at Artemisia to tell these three stories centered around the U.K. women’s suffrage movement. These plays written a century ago, these plays about a movement that long ago enjoyed its victory, these plays that ought to be museum pieces by now! -- are astonishingly relevant to our life in 2019 America. As we prepare for a year ahead of contentious election politics here at home, examining the importance of One Person, One Vote is more vital than ever. These three plays offer a kaleidoscope view of opinions, political tactics, and opposing values that are very much ‘of their time’ and yet eerily reflect ones that persist today in modern America. With our own country approaching a crossroads in November 2020, now is the time to bring these 100-year-old British stories back to the stage.”

Evelyn Glover was one of the most influential writers of suffrage plays, and dramatized the arguments of working-class women in particular, because of the criticism that was leveled at the Suffrage Movement - that only middle-class women would benefit from sexual equality and the vote. A CHAT WITH MRS. CHICKY depicts a conversation between a suffragette charwoman and an upper-class matron; and MISS. APPLEYARD’S AWAKENING is a comedy in which an anti-suffrage activist comes to realize the fallacies and illogic of her views.

George Bernard Shaw, most remembered for plays like SAINT JOAN, PYGMAILION, and CANDIDA,  which were critical of Victorian notions of marriage and femininity, openly supported women’s suffrage. His one-act comedy PRESS CUTTINGS is a farce satirizing British politicians and attitudes against suffrage and imagines a time when suffrage activism led to an imposition of martial law and a chaotic society.

Artemisia will offer post-show discussions using these historical pieces on Women’s Suffrage to celebrate the upcoming 100th anniversary of the 19th Amendment, and to bring to light the importance of one person – one vote in anticipation of the 2020 presidential election.