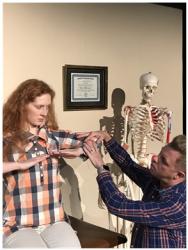 Bonnie (Ellie Campbell), a kindergarten teacher who wrenched her back, rushed to her favorite chiropractor to get some relief only to discover that he’s gone and there’s a stranger sitting in his office.  The stranger, who introduces himself as Neil (Mark LeBeau), says he just bought the practice, and she’s his very first patient.

Desperate for relief, Bonnie decides she doesn’t care who he is and demands that he fix her back, but instead of the painful manipulation she expects, he does something New-Age-y and completely different.  When he’s done, she doesn’t have any more pain so she goes back to her classroom.  On the way out, she tells Neil to sell the practice back at whatever bargain price his predecessor is willing to pay because ‘you people’ are never going to be successful here.  In spite of the rules, she’s determined to bring her religion into the classroom and whenever her back flares up, she returns to Neil, but she’s his only patient because of the things she’s said about him.

I can’t even imagine why anyone would write a play about a gay man and a born-again Christian, let alone a musical.  While neither character is very empathic, I loathed Bonnie’s intolerance.  I lived in a small town in Ohio very like the one in the play, and met more than one Bonnie.  It was not a good experience.