TANDY CRONYN STARS IN THE SOLO PERFORMANCE  THE TALL BOY, DECEMBER 5 – 15, AT STAGE 773 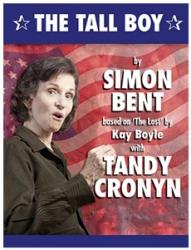 The Tall Boy is a moving tale told by the American matron of an orphanage for “unaccompanied children” in occupied Germany following World War II. Examining the fragility and resilience of children in war, she tells the story of three boys: a 15-year-old Czech, a 14-year-old Pole and a 12-year-old  Italian. The boys have become mascots to the GIs and are desperate to get to America to be reunited with their US Army buddies but only one boy has a soldier willing to adopt him.

Kay Boyle's short story, “The Lost,” was originally published in a collection titled “Smoking Mountain: Stories of Germany During the Occupation.” Tandy acquired the rights and commissioned a stage adaptation from British playwright, Simon Bent. The script has been presented in various venues across the United States including the 2014 United Solo Theatre Festival in New York City where it sold out and won the ‘Best Adaptation’ Award.  This September, The Tall Boy returns to New York City and the10th Anniversary Solo Festival as one of the shows invited to participate in its “The Best Of” category featuring critically-acclaimed and audience favorites from previous Solo Festivals.

Tandy Cronyn was born in Los Angeles, raised in New York, and made her professional acting debut in Montreal. She made her Broadway debut as “Sally Bowles” replacing Anita Gillette in the original Cabaret run and Off-Broadway she has performed in The Mint Theater’s revival of The Return of the Prodigal (which earned a Drama Desk best revival nomination), the Roundabout Theater’s revival of The Killing of Sister George, and in A Shayna Maidel. Off-Off Broadway Cronyn performed in Nat Cassidy’s Old Familiar Faces in the 2013 New York Fringe Festival for which she was nominated for outstanding actress in a lead role by the New York Innovative Theatre Awards and recently appeared in Mac Rogers’ Universal Robots. She was last seen in Chicago in 2005 when she appeared at Victory Gardens in Jeffrey Sweet’s Berlin ’45. She has toured nationally in A. R. Gurney’s The Cocktail Hour, Mary Chase’s Harvey and the Stephen Sondheim musical, Company. Cronyn has performed major classical and contemporary roles in theatres across North America, notably Hartford Stage, Barrington Stage Company, Yale Repertory Theatre, Cleveland Play House, San Diego’s Old Globe and the Denver Center Theater Company. She portrayed “Emily Dickinson” in The Belle of Amherst at Missouri Rep, “Beatrice” in Much Ado About Nothing at The Stratford Festival of Canada and “Vivian Bearing” in Wit for PlayMakers Repertory Company at UNC, Chapel Hill, where she also performed in productions of Waiting for Godot, Mourning Becomes Electra, Hamlet, Richard II, and the American premiere of A Prayer for Owen Meany by Simon Bent. Over the years her work has covered a wide spectrum of styles and playwrights, including Edward Albee, Jean Anouilh, Alan Ayckbourn, Samuel Beckett, Bertholt Brecht, Noël Coward, Brian Friel, A. R. Gurney, Lillian Hellman, Ibsen, Donald Margulies, Martin McDonagh, Moliere, Eugene O’Neill, Neil Simon, Shakespeare, G. B. Shaw, Michele Tremblay, Oscar Wilde and Thornton Wilder.  Growing up in a theatrical family, the daughter of Jessica Tandy and Hume Cronyn, Tandy Cronyn learned to love poetry early in life. On the Internet, she serves as artistic director of PoetryTheatre.org, a website featuring great poems read by distinguished actors. Her father is included in the website’s recordings, unfortunately it started too late to capture her mother’s voice.

Jeff Landsman has produced theatre, cabaret and motion pictures, most recently the play Flyovers by Jeffrey Sweet. The show starred Richard Kind, Michele Pawk, the late Kevin Geer and Donna Bullock.  Additionally, he produced “The Rub,” a short film written by Sweet, starring Michele Pawk and Karen Ziemba. Landsman was the developmental reading series coordinator and a board member for York Theatre Company in New York City. At York, he helped to produce The Show Goes On, written by and starring Tom Jones and Harvey Schmidt. He was associate producer for York’s workshop of Little Women, as well as for York’s fall, 2002 Musicals In Mufti Series. Together with Music in a Box Theatre Company, he served as a producer of Downtown Dysfunctionals! Little West Fifth Avenue Episode 2: Baby Buddha. He was one of the producers of Trouble in Shameland, a musical that appeared in the 2006 NYC Fringe Festival. He has also produced a number of cabaret shows, and been part of the producing team for two independent feature films, Being Claudine and Ben’s Plan.

ABOUT 2019 YEAR OF CHICAGO THEATRE

The Tall Boy is proud to be part of the 2019 Year of Chicago Theatre, presented by the City of Chicago and the League of Chicago Theatres. To truly fall in love with Chicago, you must go to our theatres. This is where the city bares its fearless soul. Home to a community of creators, risk-takers and big hearts, Chicago theatre is a hotbed for exciting new work and hundreds of world premieres every year. From Broadway musicals to storefront plays and improv, there’s always a seat waiting for you at one of our 200+ theatres.