“Indiana is a state with a proud history of showing honor and respect to our nation’s veterans,” Governor Eric J. Holcomb said. “Naming U.S. 20 as the Medal of Honor Memorial Highway is a wonderful tribute to the men and women who protect our freedom and our country, and I’m so grateful to Rep. Zent and the veterans’ organizations that led this effort.” 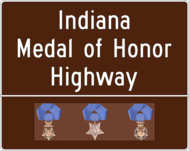 By designating U.S. 20 as the Medal of Honor Memorial Highway, Indiana joins a national effort to name U.S. 20, which runs 3,365 miles from Boston, MA to Newport, OR.  Indiana is home to 156 miles of US-20 and is the sixth state to adopt the Medal of Honor name formally.  Oregon, Idaho, Montana, Wyoming and Nebraska have named their sections, and efforts are underway in Iowa, Illinois, Ohio, Pennsylvania, New York, and Massachusetts to name their portions.

"I'm proud that INDOT played a role in joining this national effort to pay tribute to our heroes," Indiana Department of Transportation Commissioner Joe McGuinness said. "The freedoms we cherish as Americans would not exist without the extraordinary bravery and selfless sacrifices of Medal of Honor recipients and all our veterans." 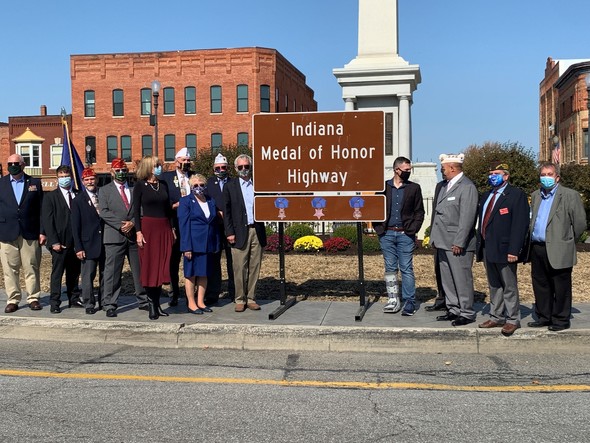 Since the Medal of Honor was first presented during the Civil War through March 2020, 3,508 awards have been issued with every state represented.  As of October 2020, there are 68 living Medal of Honor recipients across the U.S.  To earn the Medal of Honor, a member of the U.S. Armed Forces must act with “conspicuous gallantry and intrepidity above and beyond the call of duty during combat at the risk of one’s life against an enemy of the United States.”

About the Indiana Department of Transportation
Over the past 100 years, INDOT has transformed the state of Indiana into the Crossroads of America we know today. With six district offices and 3,500 employees, the agency is responsible for constructing and maintaining more than 29,000 lane miles of highways, more than 5,700 bridges, and supporting 4,500 rail miles and 117 airports across the state. Indiana once again ranked #1 in the U.S. for infrastructure in CNBC’s 2019 “America’s Top States for Business” ranking. Learn more about INDOT at in.gov/indot.