"What the Constitution Means to Me" to Star Maria Dizzia 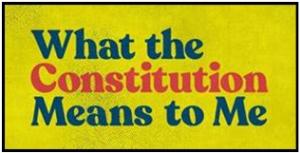 “I have loved and admired Maria for many years and I consider it a huge gift to have an actor of her tremendous talent giving new life to this play,” said Heidi Schreck. “I'm thrilled to be bringing Constitution to audiences across the country with this brilliant and generous artist at the helm.”

“I learned so much as a woman and a citizen from Constitution and am so excited to be a part of it,” said Maria Dizzia. “I can't wait to work with Heidi.”

Playwright Heidi Schreck’s boundary-breaking play breathes new life into our Constitution and imagines how it will shape the next generation of American women. Fifteen-year-old Heidi earned her college tuition by winning Constitutional debate competitions across the United States. In this hilarious, hopeful, and achingly human new play, she resurrects her teenage self in order to trace the profound relationship between four generations of women and the founding document that dictated their rights and citizenship.

Schreck’s timely and galvanizing play, directed by Oliver Butler, became a sensation off-Broadway last fall before transferring to Broadway where it received two Tony Award® nominations among countless other accolades. See the play The New York Times hails as "not just the best play on Broadway, but also the most important."

Initially announced for a 12-week engagement on Broadway, What the Constitution Means to Me was extended twice and fully recouped in its Broadway engagement, shattering box office records at the Helen Hayes Theater (240 W 44th Street, New York, NY), for a total run of 24 weeks. What the Constitution Means to Me officially opened March 31, 2019 after beginning preview performances March 14, and played its final Broadway performance on August 24, 2019.

What the Constitution Means to Me recently concluded a record-breaking limited engagement run at the Eisenhower Theater at the John F. Kennedy Center for the Performing Arts in Washington, D.C., where it played 15 performances immediately following the conclusion of the Broadway run, from September 11 through September 22, 2019.

The national tour of What the Constitution Means to Me is produced by Diana DiMenna, Aaron Glick, Matt Ross, and Level Forward & Eva Price.

Additional praise for WHAT THE CONSTITUTION MEANS TO ME:

“A brilliantly crafted show, harrowing and funny and humane, that accesses the political through the deeply personal.”

“It’s more than an unmitigated success. It’s a sensation.”

“Few new works are as instantly, trenchantly timely as this. Unique, funny, stimulating and exquisitely heartfelt.”

“It would be hard to identify a work for the theater with its finger more cogently and rewardingly on the pulse of America right now than this.”

“It’s not just the best play to open on Broadway so far this season, but also the most important.”

“A wildfire every citizen must see! Heidi Schreck’s play has tears on its cheeks and the torch of liberty in its fist.”

“It should play in every city in America.”

“In this dire moment of cultural fragmentation, What the Constitution Means to Me is offering an oasis of connection, a place where humanity and learning are being celebrated and protected.”

“What the Constitution Means to Me is redefining what political theatre can be: something that is not polemic or didactic, but personal and urgent.”

ABOUT BROADWAY IN CHICAGO
Broadway In Chicago was created in July 2000 and over the past 19 years has grown to be one of the largest commercial touring homes in the country.  A Nederlander Presentation, Broadway In Chicago lights up the Chicago Theater District entertaining more than 1.7 million people annually in five theatres. Broadway In Chicago presents a full range of entertainment, including musicals and plays, on the stages of five of the finest theatres in Chicago’s Loop including the Cadillac Palace Theatre, CIBC Theatre, James M. Nederlander Theatre, and just off the Magnificent Mile, the Broadway Playhouse at Water Tower Place and presenting Broadway shows at the Auditorium Theatre.   Broadway In Chicago proudly celebrates 2019 as the Year of Chicago Theatre.  For more information, visit www.BroadwayInChicago.com.

MARIA DIZZIA’s New York theatre credits include If I Forget, The Layover, Belleville (2013 Drama Desk Nomination), Uncle Vanya, Cradle and All, In the Next Room (or the Vibrator Play), (2010 Tony Award nomination); The Hallway Trilogy, and more. Maria portrayed Polly on three seasons of Netflix’s Orange is the New Black. Other film and television credits include: The Deuce, Bull, Red Oaks, While We’re Young, Martha Marcy May Marlene, Margin Call, Rachel Getting Married, Horace and Pete, Royal Pains, The Newsroom, The Good Wife, Master of None, Louie, Fringe, and Law & Order. Upcoming, she will be seen in the new HBO series, The Undoing and the independent feature, I Was in Your Blood. Recently she made her directorial debut with the Amios theatre company in their production of The Loneliest Number. She can currently be seen in 13 Reasons Why streaming on Netflix and throughout the first season on Emergence on ABC. Maria received her MFA from the University of California, San Diego.

HEIDI SCHRECK is a writer and performer living in Brooklyn. What the Constitution Means to Me was recently named a Pulitzer Prize finalist and won the Obie Award and New York Drama Critics’ Circle Award for Best American Play. Schreck also received two Tony Award nominations for What the Constitution Means to Me for Best Play and Best Performance by an Actress in a Leading Role in a Play, and received the 2019 Benjamin Hadley Danks Award from the Academy of Arts and Letters. Her play Grand Concourse, which debuted at Playwrights Horizons and Steppenwolf Theatres in 2014–2015, won the Stacey Mindich Lilly Award in 2015 and was a finalist for the Susan Smith Blackburn Prize. Screenwriting credits include I Love Dick, Billions, and Nurse Jackie. Schreck has also taught playwriting and screenwriting at NYU, Columbia, Kenyon College, and Primary Stages. She is the recipient of three Obie Awards, a Drama Desk Award, and a Theatre World Award. She is the recipient of the Horton Foote Playwriting Award and the Hull-Warriner Award from the Dramatists Guild.